Gabriele Lodi on his recent “Torres Interpretation” built for GSI:

After many years of research on historical Spanish guitars, and thanks to my recent appointment as curator of the “Torres Anniversary Exposition” in the Cremona Museum, I have tried to use all my knowledge to create my tribute to the Spanish traditional system of construction that first came into manifestation with the work of Antonio de Torres. “My Torres Interpretation” is simply my way to respect as much as possible the great Spanish master and at same time make a guitar that satisfies the needs of the modern player.

At the time Torres was building in the mid- to end- of the 19th century, his instruments were fitted with gut strings and played with a technical style developed by Julian Arcas and Francisco Tarrega. Since that time, several new developments have emerged, and today, players use nylon strings and a different technique which applies more pressure to the string to produce a strong attack. So my goal is to save the pure Spanish sound of the Torres design but with a few minor modifications to the bracing – largely with their shape. I seek to achieve good balance from the deep basses to the higher trebles, good dynamic range, no missing “wolf” notes and the correct sustain, particularly on the first string which is very particular for the Torres sound. Other than these slight modifications, the rest the guitar is very similar to an original Torres in terms of thickness of the top, sides and back, with a lower body resonance in between E and E Flat. Neck shape is wider, as is the fingerboard, so as to be immediately comfortable to a contemporary player. The shape is based on the larger Torres bodies found in the second-epoch. The woods selected are very close in quality to Torres’ instruments. All woods are well-aged and have been stored since the 1970s.

Aesthetically, the guitar is inspired by the first two Torres guitars (both of flamed maple) that had belonged to Francisco Tarrega. The purfiling design is also featured in the head plate, and I use Torres replica tuners by Alessi. The bridge is CSA rosewood with typical mother of pearl decoration in the sides and ivory tower surface. This is my way to attract the new generation of players to the Torres sound, because I consider it the most important reference still for today! 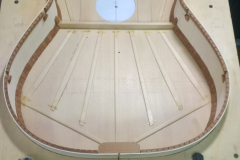 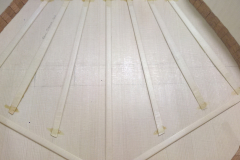 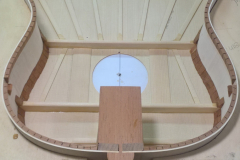 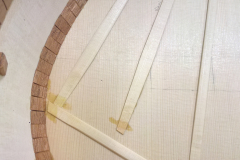 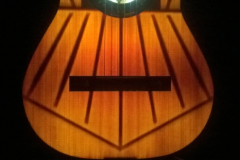 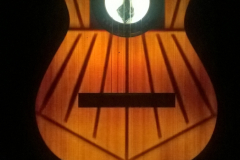