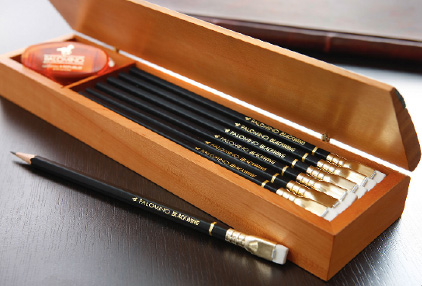 In a rehearsal the other day we got to talking about how some charts are hard to look at, when Ric Fierabracci (monster bass player) announced that he had the hands-down best pencil for writing charts. I’ll admit this took me a little by surprise. First of all, we were talking about pencils. Second of all, in school I’d been told only to use mechanical pencils of at least .7mm (preferably .9mm) and I hadn’t given it much thought since. Nowadays, on the rare occasions when I have to write a chart (not a ton of charts in the  flamenco world) I write with whatever’s at hand and then copy into Sibelius, which solves my terrible handwriting/chartwriting issue, so legibility hasn’t been a huge concern.

Anyway, Ric gave me one of these pencils, a Palomino Blackwing, and said that everyone from Stravinsky to Sondheim has used these pencils and that they’re pretty much it when it comes to pencils for writing scores and charts. Being a little old-school myself, I just loved the idea that people still care about pencils. So what’s so great about this particular pencil? I’ll quote from the Pencils.com website (yes, there is such a thing):

“Though a mere pencil, the Palomino Blackwing has a long and strong history. Its predecessor, the Eberhard Faber Blackwing 602, had its virtues praised by artists and writers alike through the decades. The Paris Review quoted John Steinbeck:

That motto, “Half the Pressure, Twice the Speed” has lived on with the Blackwing through Eberhard Faber’s transition into Faber-Castell in the 1980s. Another unique feature to continue was the rectangular ferrule and eraser, which as Mr. Sondheim mentioned, makes the eraser longer and keeps it from sliding off a desk.”

Apparently they stopped making them for a while, but they’re back now, so you can go ahead and feel fancy and use a pencil with a history. I will simply say that it feels great to write with, really does glide along, and what you write looks strong and bold, though not overly bold or anything. I haven’t had enough recent frustration with ordinary pencils to truly appreciate it, but it was certainly fun pretending for a while that pencils were once again an important part of my life as a musician. Now I just have to work on my handwriting.

Regarding reading the op’s blog plenty will believe the above because its accurate so it’s good seeing a blogger that’s posting this for us to consider.

Regarding reading this blog post everyone will agree with the above since it is reality so it is great to see a person that is blogging content on this publically to look at.