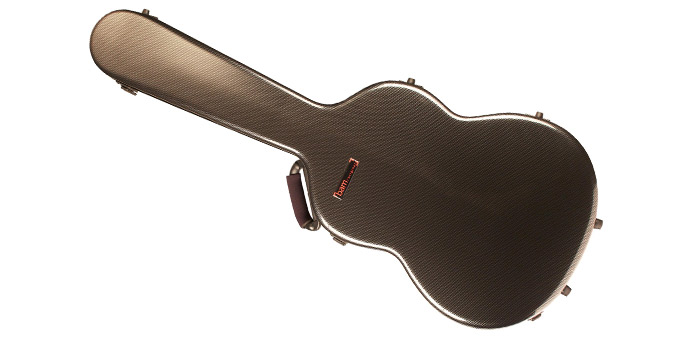 I’ve owned a lot of guitar cases. I’ve had Caltons, an Accord, those foam ones, cool-looking old ones, about a dozen of those ones that Spanish guitars come in (the black ones and the plastic ones – you’d think I’d know who makes them) a faux alligator skin Italian one and the Reunion Blues gig bag I’ve had for at least 15 years now. I had to replace the strap on the gig bag, but other than that it’s like new.

The catch-22 with travel is that you’re way more likely to get a gig bag on board, but if you get that person who’s hell-bent on taking the guitar from you the last thing you want to do is check your guitar in a gig bag, no matter how good it is, so I always end up taking a case and at least 9 times out of ten I get in on the plane. I had to check the Caltons a lot, though. They call so much attention to themselves that you can’t really act like you don’t have a guitar, so you’re you pretty much end up checking it. But then again it’s a Calton – huge and heavy, but solid as anything – so I never had anything bad happen to a guitar I had to check in a Calton.

But I did have bad things happen to my back. When I got back from two weeks in Tokyo, lugging my Calton around to rehearsals and gigs on the subway, I vowed that as much as that case would protect my guitar, it wasn’t worth it if the 25 pounds of guitar and case were going to break my back. 25 pounds may not sound like much, but just try lugging it around all day for a couple of weeks. If I had roadies I’d get another Calton and be done with it.

So when I got back from that trip a few years ago I started looking into lighter cases and came across the Accord. It weighed less than half of what the Calton weighs and was made of Kevlar, which is just plain cool. They cost $1400, though, if you can even get your hands on one, so they’re not for everyone. But they feel indestructible, possibly even more so than the Calton.

The Accord seemed to solve my problem, but the first thing I disliked – and this is some serious quibbling, I grant – is that there’s nowhere to put anything. I don’t need much in my case – strings, a nail file, maybe a little tuner and nail clipper, peg-winder, some glue, and that’s about it. And yet there was nowhere to put this stuff. Also, it reminds me of a fish, in that it’s all rounded edges and somehow slippery to get ahold of. Nice on my back, but somehow awkward to put down or lean against anything.

Between the Calton and the Accord I’m not sure which would do a better job of protecting my guitar – I’d probably still sleep on the plane if I had to check either – but neither felt right for carrying around when I got to my destination, or for day to day.

Someone offered to buy my Accord (I had gotten it as payment for a gig), and I needed the money so I sold it. And then I bought a BAM case. I’ll admit that I thought the BAM was made out of carbon fiber when I bought it, but it turns out that it’s not. It’s some proprietary material/method that BAM has developed, that certainly looks like carbon fiber, but doesn’t give me the same confidence. I can’t afford to try this, but it feels like I could put my foot through the BAM case with a good stomp, where the Calton or Accord feel like I might hurt myself if I tried that. Also, there’s very little padding inside of the BAM case – just enough around the edges to suspend the guitar about half an inch from the hard stuff, but apparently they think this is enough.

BAM sells a flight case for their case, which I guess should tip us off that the case is not meant as a full-on flight case. The case case is an enormous soft case that you put your whole BAM case inside of. It’s way oversized, looking like maybe Andre the Giant’s guitar case, and if you took that to the airport there’s no way you wouldn’t be checking, though I think I would feel pretty comfortable checking a guitar inside a case that’s inside of the other case. I considered it, but it’s just too big and weird.

But the BAM feels amazing. I spend most of my life carrying a guitar case, and the BAM case is far and away the most comfortable case to carry around I’ve ever owned. It no longer feels like lugging. At about 6 pounds, if anyone else picks it up the first question is whether or not there’s a guitar in there. And the balance of the thing is just amazing – you can just stand it up on its end and it stays there, and even the weird looking contoured neoprene backpack straps seem more comfortable than normal straps. I can carry this thing around all day and it never feels awkward or tires me out at all. Even the latches are cool – flip them up and they stay open.

The deal breaker should be that I’m not really confident how it would do if I had to check it, but I’ve never had to check it, and I have a theory about that: because it’s so easy to carry, I don’t look like someone who’s carrying a guitar or a big case, so when I get on a plane I don’t think most people even notice the guitar, and I get right on. Of course it’s possible that I’ve just gotten really good at taking guitars on planes, but that’s my theory for now (which hopefully I haven’t just jinxed).

Like the Accord and a lot of modern premium cases, there’s not a ton of room for stuff in the case – BAM provides a little neoprene bag that fits under the neck and zips open, which fits everything I need except the strings (which go under the headstock). It’s a decent compromise, but I still prefer the traditional little compartment under the neck of the normal case.

$700 is a lot to pay for a case that may or may not survive a plane trip, and if I travelled as much as I used to I’d probably get something else, since my gut tells me that of the premium cases this may well be the least protective (all based on my non-scientific system of poking and prodding). But as a friend of mine who bought one put it, ‘it’s a life changer’. It’s a great case that will take care of your guitar and that you can carry around all day, every day, without ever feeling it, and that’s apparently worth about $700 to me.