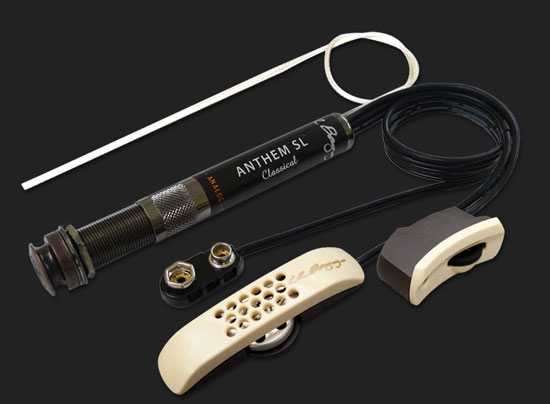 Last year I wrote a bit about what a snob I am when it comes to pickups for my guitars in my review of the Kremona pickup, and I’m still pretty much as snobby as ever. But I’m also an optimist (I guess) and every year or two I ask around and see if anything new has come along that might make me consider plugging in, if only for rehearsals and such. After all, I love the sound of my guitars, and not the sound of pickups. But I’m always mic’ed when I play live, so to that extent it’s never the actual sound of my guitar in a room that I’m hearing, and I should probably admit that it’s the extent of the compromise that has always bothered me with pickups.

When Ryan at L. R. Baggs sent us a new pickup, the Anthem SL Classical, to review, I figured why not take the plunge again and see how the latest thing sounds. So I had the pickup installed in my GSI Studio Series CM-100S. Installation was quick and only required the standard end-pin hole in the guitar (I still had it done professionally). The folks at L. R. Baggs claim that the positioning of the mic isn’t super-critical, and the Element under-saddle pickup is installed like any other undersaddle pickup.

What makes the Anthem SL different, according to L. R. Baggs, is the tru-mic, which is installed by affixing it to the bridge plate (right under the bridge, inside the guitar), or as close as possible, depending on the guitar. The mic handles most of the frequency response, with the Element taking care of frequencies under 250Hz. This still means that the Element is responsible for the fundamentals in most of open position, up to the second-string B, though the tru-mic transmits most of the overtones.

L. R. Baggs claims that the tru-mic is delivers ‘unprecedented feedback resistance’ and I will say that I kind of tried to make it feedback by cranking it right next to the amp and pretty much facing the amp, too, and was very impressed that I had to do my best Pete Townshend imitation to get any feedback.

Most combination mic/pickup systems have some sort of blend feature, which allows you to determine how much of your signal comes from the undersaddle pickup and how much comes from the mic, but L. R. Baggs have gone another way, by instead giving you a mic gain control. This amounts to the same thing, really, except that I accidentally discovered that you can overdrive the mic by cranking the gain too high. The mic gain is controlled by a little screw that is in a recessed hole in the soundhole-mounted remote, so it’s not something you can easily adjust – you need a tiny screwdriver and decent light, so it’s the sort of thing you’ll set at home before the gig. The only other control on the remote is a volume wheel, and the remote is very small and unobtrusive. The Element’s signal is blended with the tru-mic’s in an endpin mounted preamp, and there’s no control for that.

OK – so how does it sound? The short answer is ‘listen to the MP3 and decide for yourself’. My impression is that this is indeed an improvement over other pickup systems on the market, and feels like less of a compromise than pickups I’ve tried in the past. It doesn’t sound exactly like the guitar does unamplified, or even like the guitar played through an external mic, of course, because it’s a pickup system. I still had to use more reverb than I normally would to soften the attack (this is true of every pickup I’ve ever tried), but less than I’ve had to use in the past, and to EQ these clips I just scooped out a little bit at 1.5kHz.

i have used every concievable option out there. for venues where a high end mic is not viable, like playing with a chamber orchestra or where there is a lot of stage noise, the best mic i have found is a condensor mic made by countryman in the bay area. with a notch filter or using a roland acoustic amp with built in notch filter/phantom power, i can turn it up and have few issues with feedback.

it comes with a clip and is about the length of the head of a pencil, i clip it on the soundhole and it sits about an inch or so below the strings.

it also comes closest to sounding like the guitar.flamenco or classical.

The Audio Technica Pro 70 sounds like it’s similar to the Countryman referred to above, and does a nice job. However, this Anthem is intriguing…