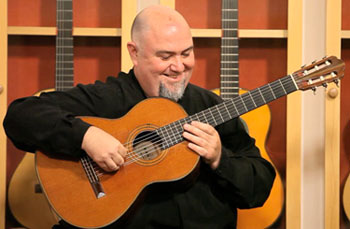 When Scott Tennant came by to play some of the Cleveland Collection guitars late last year he more or less fell in love with the 1969 Ramirez that Segovia had owned and played from 1969 to 1980. When he told us he was about to record a CD of Segovia’s compositions we all had a Eureka moment and realized he had to record the CD using this guitar. The CD will be produced by the Guitar CoOp in Brazil (which is headed by our friend Marcelo Kayath) but we will record it here in Santa Monica.

Back in January we went with Scott to Apogee Digital’s Berkeley St. Studios to play with their new flagship Symphony I/O MkII interface and mic pres and record Scott playing the Segovia Ramirez. As you can see, we also had some help from our friends at AEA Microphones, who lent us their amazing R44ce and a pair of N22 active ribbon mics for the session.

The videos we shot were more by way of teasers and to show off the new Apogee Symphony, but they’ll give you a taste of what to expect from Scott on this amazing and historic guitar. Scott is still in pre-production for the CD and we don’t have dates yet, but we’re very excited to be able to provide this great guitar for Scott’s next project which just happens to be so very appropriate.

Absolutely beautiful. Great Tennant and great Ramirez. I will never ever sell my Ramirez Camara model, for sure. Compliments for your inspiring projects.

Sounds so much better than so many other modern guitars.

The irony of Scott playing Aranjuez on Segovia’s guitar is astounding. Maestro Segovia is rolling in his grave.

What are the mics that are being used for recording in this video? Great sounding guitar and recording.

1) My computer doesn’t have the best speakers but this recording sounds incrediously tinny, not anywhere near Ramirez quality.

2) According to Jose Ramirez III in his book “Things About The Guitar”, he was continually making improvements to his guitars. Every new prototype went to Segovia in return for the guitar he was currently using. If that is so, how can Segovia own only one Ramirez between 1969 and 1980?

Those are ribbon mic from AEA (http://www.ribbonmics.com/) – the big one is the R44ce and the stereo pair are the N22.

It is the speakers, not the instrument or recording. On Grado headphones the sound is very good. Wonderful definition in the bass, clear trebles, nothing overly bright or thin. Scott does not play like Segovia, e.g. he typically has his right hand closer to bridge which will give a somewhat brighter tone. He has a distinct sound that is quite recognizable. Some might like a warmer less crisp playing style, that is a matter of taste.