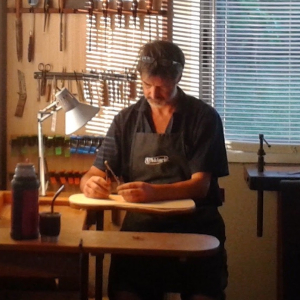 Being a luthier is like being an architect of the sound

We discovered Ariel Ameijenda on a recent trip that David and JohnPaul took to South America in 2014. The GSI duo found some great gems in the area, some of which they brought back to the US, and while in Uruguay, they were most notably enthralled by the works of Ameijenda and the reputation that proceeds him to this day. Find out more about guitar-maker Ariel Ameijenda and his life with the classical guitar.

Ariel Ameijenda was born in Montevideo, Uruguay in 1963 as the son of one of the country’s most famous guitar makers, Manuel Ameijenda. Ariel’s father had learned this difficult art of lutherie from Juan Carlos Santurion, and Santurion had studied at Fleta’s workshop in Barcelona, Spain in the early 1950s.

The elder Ameijenda opened his own shop in 1957 and shared it for several years with Jose Lopez Cubillo. Cubillo had been the lead craftsman at the workshop of Jose Ramirez II in Madrid, Spain. Consequently, in a short period of time, Ariel’s father had the opportunity to learn techniques from the two leading schools of guitar-building in Spain, centered in the cities of Madrid and Barcelona. 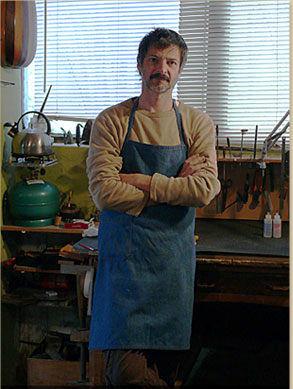 As a child helping in his father’s workshop, Ariel learned the finest techniques used by world-class makers of classical guitars and Renaissance and Baroque string instruments. More importantly, the passion necessary for such pursuits came to him quite naturally and very early in life. At the age of 14, under his father’s guidance, Ariel progressed from helping with repairs to starting the construction of his very first instruments.

When he was 19, Ariel entered the University where he studied Musicology. During those four years, he paid special attention to the subjects of Acoustics and Music History. These were very useful studies that have greatly influenced his approach to the construction of guitars and ancient instruments.

Ariel Ameijenda’s guitars are represented in the USA by yours truly, GSI, and we are very proud to host his wonderful works.

SEE SOME OF Ariel Ameijenda’S GUITARS