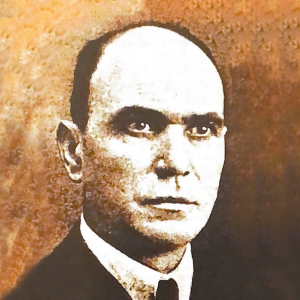 There is no doubt that the workshops of José and Manuel Ramírez played a central part in the history of guitar making in Spain. Apprentices trained here would go on to become some of the most important makers of the century. And of course, many students of these apprentices, such as Francisco Simplicio (pupil of Enrique García), would also continue to carry on the legacy marked by his predecessors in his own, masterful way.

Simplicio’s story stems from his apprenticeship with Enrique García. Enrique García (1868-1922) was the son of one Juan García, a maker of guitars and mandolins. José Ramírez III, custodian of the family’s tradition, always insisted that García was trained by his great grandfather, José Ramírez I. José Romanillos, in his biography of Torres, insists that García was apprenticed to Manuel Ramírez. He cites Domingo Prat (1886-1994), who knew García and maintained that he was apprenticed to Manuel Ramírez in his premises at Plaza Santa Ana. Furthermore, as Romanillos has discovered, he is recorded as working there in a census document of 1890. 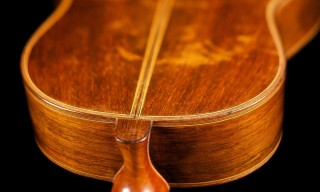 None of this is of any great consequence. The important event in Enrique García’s career was his move to Barcelona, which seems to have taken place in the early 1890s. Barcelona had its own strong, if idiosyncratic, tradition of guitar-making, owing more to French practice than to the Spanish.

Into this potentially hostile environment, García brought the ideas of Manuel Ramírez and Antonio de Torres. “His beginnings in this town were difficult,” comments René Vannes, in the Dictionnaire Universel des Luthiers. “But soon García became celebrated in Europe and South America, and was considered in his own country as the Stradivarius of the guitar.” In 1893 he won first prize at the Chicago Exhibition, a feat commemorated on his labels.

Domingo Prat, who had learnt the guitar in Barcelona, emigrated to Argentina and introduced García’s instruments to that country. García’s guitars owe a great deal to Torres. Many had similar plantillas and some even used a tornavoz, the metal sound-reinforcing tube which Torres favored. García used fan-strutting, sometimes using an asymmetric layout, unknown in Torres, to stiffen the treble side of the soundboard and augment its response.

In 1897, García was asked to repair one of the most famous of all guitars, the 1864 flame-maple instrument that Tárrega had acquired from Torres, who had made it for his own use. It had a soundboard that was said to be less than a millimeter thick all over. Tárrega played it constantly, and in 1897 the top collapsed. García’s label speaks of “removal of the back and repair of the interior”. 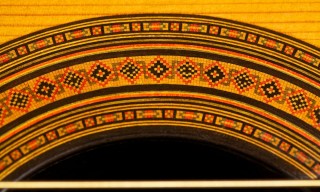 This inside view of the legendary instrument may have helped García in the developement of his craft. In the 1910s he produced a series of guitars similar to Torres’ instruments in plantilla, dimensions and even detailing. The head of [a 1912 guitar of his], for instance, closely resembles those on later Torres instruments. All would have carried Enrique García’s own label: but there was nothing to stop the unscrupulous from changing them for a fake Torres label to meet growing demand.

One guitar dealer in Paris, mentioned in Prat’s Diccionario de Guitarras, Guitarristas y Guitarreros, offered in 1910 to supply as many Torres guitars as were recquired, and if they weren’t available, to offer García’s guitars instead. A comparable attitude is discernible in Segovia’s autobiography, where he is invited to play for some Tárrega disciples and offered a García, while their favored player, a “non-nail” guitarist, was given a Torres.

Today, however, García’s reputation is strong, and not as a Torres imitator or substitute. He built nearly 300 guitars in his life and they are prized by collectors for their excellent and often ornate workmanship as much as for their sound.

Francisco Simplicio (1874-1932) was brought up in Barcelona, and was a cabinet-maker before turning to the making of guitars as a pupil of García. On García’s death, Simplicio took over the premises at Paseo San Juan No. 110, trading for several years using García’s labels. His own labels incorporated the information that he was García’s only pupil. Some of his guitars had a strong resemblance to those of Torres, to the extent that some were advertised in Germany as his Modell Torres. Once again, the head of his standard models was based on the Torres pattern, and he often used the tornavoz. His plantilla, however, was not that of Torres, nor that of Manuel Ramírez, being wider in upper bout and waist and narrower in the lower bout, producing a slightly more bulbous look.

Simplicio is celebrated for the extravagant carving and ornamentation of his deluxe models. He is also known for a series of nine experimental instruments featuring a divided soundhole on the upper part of the soundboard. This idea is that the soundboard acts as a coherent vibrating medium and is strong. But despite winning a gold medal at the 1929 World’s Fair in Barcelona, Simplicio was never able to convince players of the instrument’s advantages. He died in 1932 (0r 1933, by some accounts) and his son Miguel took over. The guitars of Francisco Simplicio are sought after by collectors because despite their age they continue to play well. 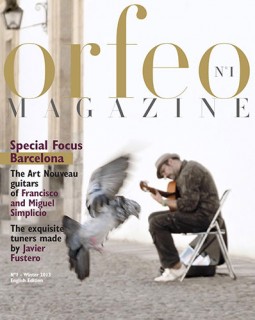 SEE SOME OF Francisco Simplicio’S GUITARS