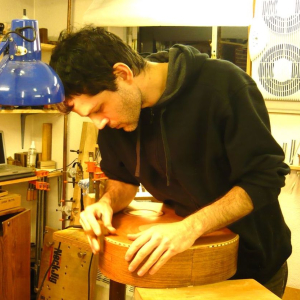 Great guitars can fill up an auditorium when they’re made to have a clear voice.

Luis Fernandez de Cordoba is a Panamanian-born luthier based in Washington, D.C. who started building guitars in 2000. Although he began constructing and repairing acoustic guitars of all styles, in 2009 he began to dedicate himself exclusively to classical and flamenco guitars.

Inspired by the traditional Spanish method of construction, Luis has spent a great deal of time studying the great masters of the past like Antonio de Torres, Santos Hernandez, Hermann Hauser I, and Robert Bouchet. He has also apprenticed in both the U.S. and Granada, Spain. 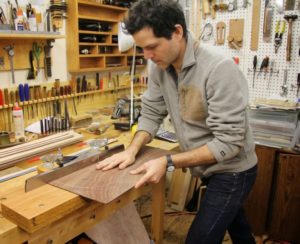 Although thoroughly traditional, his instruments have taken on a slightly eclectic style as a result of experiences in various workshops across the United States, Spain, Mexico, and Argentina.

Perhaps the most notable feature of this instrument is his use of the partial wooden tornavoz fitted inside the soundhole, which helps focus the sound in its outward projection and gives the guitar added power. It also turns the sound back into the box, causing the back to resonate more against the player’s body and enhancing the bond between instrument and player and creating a rich and lush sound.

In Fernandez’s own words:

“I got started in luthery while in my late teens. Interested in the alternative way of life of the artisan, I sought to find viable means to make my livelihood as such. Since I was playing bass, it seemed natural to experiment on my own instrument, and I discovered I had the knack for this sort of work. I began building my collection of tools, some of which I still have. All this time I always had in mind my ultimate goal: to become a luthier. Time has gone by. I completed a certified guitar-making course, followed by an apprenticeship, repair work and construction of classical, steel string and bass guitars. I’ve spent time with dozens of luthiers of all types, in the United States, Spain, Mexico, Argentina and my native country, Panamá. I continue to read all the books on guitars and luthery that I can get my hands on and I am a member of the Guild of American Luthiers.

All of this cannot replace the fact that one learns to do anything by simply doing it: by experimenting and using one’s heart, intellect and creativity to always make the best that one is capable of, and by doing good work that one can be proud of. This is the essence of what it is to be a true artisan and is what I love the most about my work. I seek to combine the beauty of art with all the technique of engineering in my work, drawing from both my knowledge base and my intuition.”

We are very pleased to be working with this fine young maker.