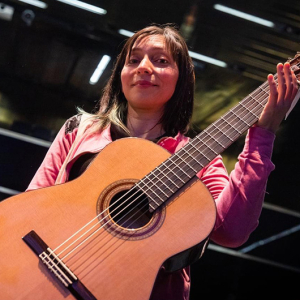 ...I not only transform and reshape the wood, but also my own passion for the instrument takes shape...

Paula Lazzarini has been making classical guitars since 2007. She was born in Buenos Aires, Argentina, and in 2016 she moved to Cremona, Italy, where she established her luthier workshop. She specializes both in traditional Spanish classical guitars, as well as in more contemporary lattice-braced guitars. Paula is also the winner of the 4th Antonio Marin Montero Guitar Building Competition in Granada, Spain.

Paula has a degree in History. A strong interest in objects and artifacts from the past eventually led her to enroll in a Master's Program in Restoration and Conservation at the University of San Martin, Argentina. Her curiosity for woods and musical instruments gradually led her to lutherie. She started with repairs and later on, she began making classical guitars under the tutelage of Ricardo Louzao, who taught her the art of guitar making. Since her early years in guitar making, Paula has always aimed for developing her style and sound.

In 2011 and 2012, Paula met several maestros and guitar makers from Italy, the Netherlands, and France, with whom she had the privilege to share her experiences of guitar making and instrument restoration. For a brief time, she also had the privilege of learning from Daniel Friederich who kindly offered her insights into the work on wood and shared his concepts on construction.

While working as a luthier, Paula came across different needs and personal sound expectations of numerous guitar players. This encourages her to further develop and try to combine the sound from Rio de la Plata and the traditional Spanish guitar.

Guitar making is a long and dynamic process in which Paula doesn't only transform the wood, but also her passion for the instrument takes shape, in a ceaseless search for sound and, eventually, for the guitar style that best represents her as a person.

SEE SOME OF Paula Lazzarini’S GUITARS