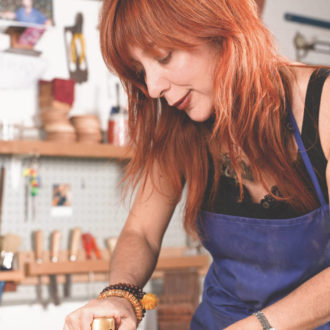 I have my heart divided into two passions: the guitar and the astrology.

Amalia Ramírez was born in Madrid in October 1955, daughter to José Ramírez III. She joined the workshop at age 21, learning the craft alongside her brother, José Ramírez IV. After a few years of absence, she returned to help her brother run the shop. Being as creative as she is resourceful, she was at first in charge of the administration and marketing, but eventually took over the workshop itself. 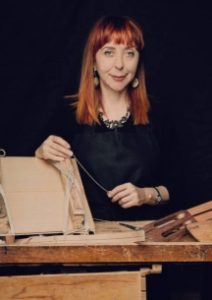 A native of Madrid, Amalia began her guitar-making apprenticeship in the workshop under the direction of her father in 1976. She left for a few years, only to return to help her brother Jose IV, in the restructuring and management of the shop, and to bring a new look to the family business.

The work was evenly distributed between the two. José Enrique was devoted mainly to the workshop while Amalia applied herself to the commercial aspects. Amalia also built guitars after establishing the workshop again in General Margallo.The real change occurred at the beginning of 1993 when they returned to the original outline of a reduced workshop and a limited production. “Today, all of our professional guitars are sold. They can be acquired in our store in Madrid or through our world-wide network of distributors.” In the summer of 1995 the store moved from Concepción Jerónima nº2, to the street of La Paz nº 8, very near the old store. After the death of her brother in June 2000, Amalia Ramírez took over the direction of the business, dividing her time between the workshop, the office and the shop. Amalia also inspects the guitars made in the workshop, both during and at the end of the construction process.An important responsibility she has taken on is the development and supervision of the apprenticeship of her late brother’s children, Cristina and José Enrique Jr., who are both very proud of learning the art of guitar-making and running the family business.

José Enrique Jr., has combined his apprenticeship as luthier with his career in law, and Cristina, is applying her training and experience as graphic designer, journalist, and sound technician in the interest of the family business. With this, and Amalia’s mentorship, they will continue the Ramírez dynasty of guitar-makers, ensuring that the quality and value of the legendary Ramírez sound will continue in prominence in the classical guitar world.

Since taking over the direction of the business, Amalia has employed an investigative approach to guitar-making, which began with different analyses of the template and fan bracing of the guitars, some based on the golden section, a route along which she has only recently begun to travel. The work is slow, not only because each investigation necessitates a huge investment in terms of time, but also because she has to combine it with the running of all the other aspects of the business. She has designed a number of different models, including the ‘SP’, which is an intermediate guitar between the student and the professional models as well as two different models to celebrate the 125th anniversary of the foundation of the Ramírez firm. The first is the ‘Anniversary’ guitar, a limited edition professional guitar, of which only 125 were made, and a student model, The 125 Years Guitar, which were produced for a limited period of five years, between January 2007 and December 2011. 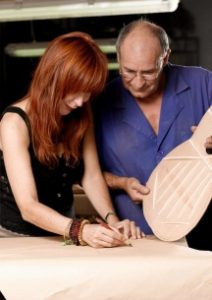 The Ramírez workshop has undergone many important changes during Amalia’s generation. In order to enhance quality, she and her brother reduced the size of the workshop and moved it to a new location in 1993. After the death of José IV in June 2000, she completely took over the workshop and committed herself to carrying on the family tradition: “I am in personal charge of supervising the processes and the quality of each and every guitar. Once completed, I check them again myself, to be sure that nothing more can be done to make them more perfect.”

A recent and exciting development in the workshop is the creation of the ‘SP’ series. This project was originally conceived during the 1980s, but due to several reasons it did not materialize until recently, under the direction of Amalia. The ‘SP’, which stands for semi-professional, is designed to provide the professional musician that has limited financial means with an instrument of professional quality. These guitars bridge the gap, both financially and in terms of quality, between the student models and the concert guitars (hence the term “semi-professional”), and they are available with a spruce or a cedar soundboard.
“It took me several days, following a profusion of study and calculations, to start sawing off the first board in order to achieve the greatest beauty, the best conditions for sound and resistance, and the highest degree of usability.”

Her nieces Cristina and José Enrique carry on the family legacy as the next generation of guitar-makers, and they have been working with Amalia since 2006.

See some of AMALIA RAMIREZ’s guitars