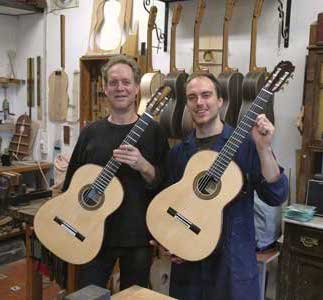 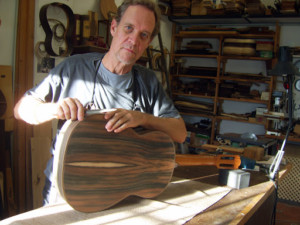 Born in Stuttgart in 1954, Bernd Martin learned to play both the piano and the guitar at a very young age. He continued his guitar studies in Stuttgart and in Munich, where he went to university.

In 1976 his passion for Spain, as well as the guitar, led him to move to Granada and to begin making his own guitars in the workshops of Antonio Durán and Jose Lopez Bellido, under the tutelage of Eduardo Ferrer. Bernd Martin was the first non-Spaniard to establish himself as a guitar maker in the city of the Alhambra, with a workshop in the Albayzín district.

Bernd has a profound knowledge of the instruments of the great master luthiers (Antonio de Torres, Manuel Ramírez, Santos Hernandez, et. al), and through his collaboration with top guitarists, and his many years of investigation, he now builds tremendous guitars with a deep, rich and lyrical sound – guitars in which precise adjustments make perfection the standard, and which offer maximum comfort to the guitarist.

To date he has made over 400 guitars using traditional techniques – instruments that renew the legacy of the old masters, and that bridge the gap between the expressive lyricism of Spanish guitars and the polyphonic equilibrium of the European school.

Since 2006, Bernd Martin has been working with his son, Lucas, in a new shop, magnificently situated in Granada’s Sacromonte district. 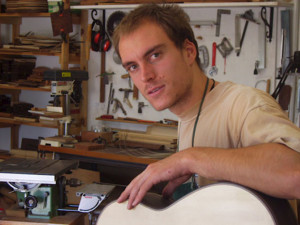 Lucas Martin was born in 1984 and has lived in Granada since 1986. At a very young age he was attracted to the work of his father, Bernd Martin, and in 2002, he built his first guitar while still in high school. After completing his degree in electronic engineering he joined his father’s workshop in Sacromonte in 2006.

Lucas Martin makes guitars based on his father’s models, which have been developed and perfected over more than 30 years, and he is fortunate to have access to woods that have been carefully selected and aged over the course of decades.

The flamenco guitar has special significance for Lucas – ‘Duende’ is everywhere in Sacromonte and Bernd Martin’s wife is a flamenco dancer and singer – and his instruments are appreciated by professionals as fonts of inspiration.

See some of BERND AND LUCAS MARTIN’s guitars