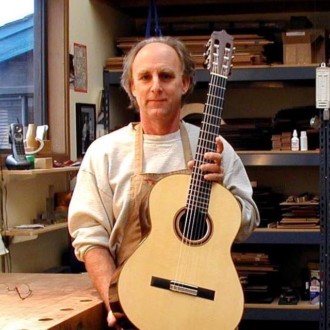 To me, guitar making is more than technique or science, more than just the finished product. It is an experiential, hands-on relationship one develops over years of trial and error...

For Dake Traphagen becoming a luthier was a very pleasant surprise in his life. When he was young his parents bought him a viola from a violin maker who told him “you have workman’s hands”. It was such an interesting and random thing to say to a young musician, but in the end, he was right! Around twelve years later, in 1972, Dake started learning the art of lutherie with the very same violin maker, Mr. Ed Hunnington. 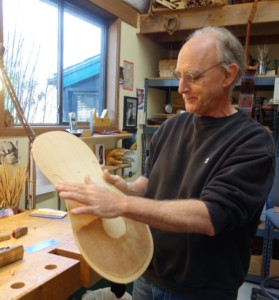 Before learning from a professional, Dake was a self-taught maker. He built his first instrument on the dining room table of his apartment, using a couple of hand tools, and books for clamps. Building instruments very quickly turned out to be Dake’s passion. Two years later, he started studying violin-making while serving a two year apprenticeship with the above mentioned luthier.

Eventually, Dake opened his own repair shop in the basement of a music store. While working there, Dake repaired and restored every type of acoustic stringed instrument imaginable. He continued building them as well. His tool collection grew along the way, to the point where he had more than just books to use as clamps.

In 1976, Dake went to Europe and visited many museums to study great instruments of the past. With encouragement from Michael Lorimer, Dake also spent a month working with the well-known Dutch lute and guitar maker, Nico van der Waals.

After returning home, Dake continued to work as a luthier. Now, over twenty five years later Dake’s passion to build the finest instruments is stronger than ever. He is known to be one of America’s most well-known luthiers and his focus has narrowed to primarily classical and flamenco guitars, as well as romantic and baroque guitars.

Dake believes that a truly great guitar needs the human touch, intuition and insight; therefore, he still primarily uses hand tools and traditional glues and finishes. To this day he admires guitars made by past masters: Torres, Esteso, Hernandez, Hauser, and Rodriquez.

“One of the world’s most artistic guitar makers. The personality and voice of each instrument express the depth of this luthier’s understanding of the true art of guitar making.” –Pepe Romero

“I believe that Dake Traphagen is one of the world’s great guitar builders. I have performed many concerts with the L.A.G.Q. on my Traphagen; it balances well with the others in the group and has great volume, clarity, and depth of sound. I’ve also been happy with the recordings I’ve done with it. Each Traphagen I see just gets better and better!” – Scott Tennant

See some of DAKE TRAPHAGEN’s guitars