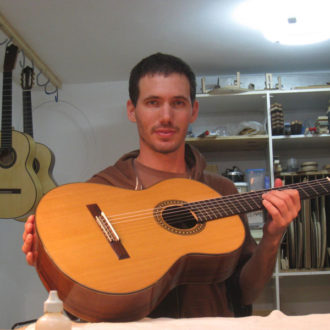 I dedicate myself to making one instrument at a time, a unique creation which is thoughtfully built for the particular guitar player.

The guitar has been Erez Perelman’s passion for over half of his life. He picked it up when he was 13 and never put it down. He formally studied both classical and flamenco styles of playing, and has had the opportunity to study with some incredible players such as the Romeros, Christopher Parkening and Paul Galbraith. He spent many years teaching, performing professionally and collaborating with other musicians.

Long before discovering the guitar, he enjoyed working with wood. Woodworking is an art that is in his blood; he learned sculpting at a young age from his grandfather. Sculpting has taught him two invaluable lessons. Firstly, he learned how to feel the wood he works with. Wood is a complex medium, and he learned to use his hands to see more than with his eyes. This is a major reason why he prefers to use hand tools over power tools. Secondly, through sculpting he learned how to visualize the finished piece before making a single cut. Although a guitar is made of many different pieces of wood, it is important to have a vision of the finished instrument.

His joy of woodworking eventually led him to build guitars. Primarily self-taught, his first guitar was a challenge that took nearly a year to build and today he still enjoys picking it up and playing it. Erez has learned a lot since making that guitar, some by trial and error and much from fellow luthiers. He owes much thanks to master luthier Eugene Clark from whom he learned firsthand many of the nearly lost methods of the old masters. Most important he learned from inspecting many instruments. While living for several years in Southern California, Erez was a regular visitor to GSI, where he spent many hours inspecting and playing the many great historical instruments as they were passing through. Today he is represented in the USA by GSI.

In parallel he received a PhD from the University of California, San Diego. This had a profound influence on his guitar building. Research has taught him rigor and how to objectively evaluate his creations. He applies this perspective to every instrument he builds.

See some of EREZ PERELMAN’s guitars