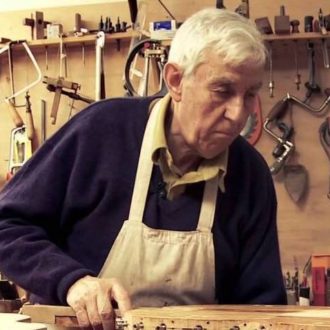 A good guitar is empirical; it is borne of the experience that the luthier accumulates throughout his or her career

José Luis Romanillos Vega was born in Madrid in 1932 and at thirteen years of age he was apprenticed to a Madrid cabinetmaking firm. In 1956 he moved to England to work in a hospital in Epsom and a few months later, he transferred to a hospital in London. Five years after his move to England, he made his first Spanish guitar in London, a city foreign to his native roots. 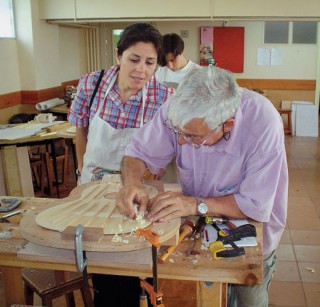 In 1970 he set up a workshop as a guitar maker in the village of Semley, Wiltshire, encouraged by the English guitarist Julian Bream. Romanillos guitars have received recognition from world-class guitarists as much for their sound as for their aesthetic makeup and attractive appearance. The pure sound and the harmonic balance of the strings is what Romanillos has looked for in his quest to produce the subtle “Spanish sound”. The Daily Mail has called him “the Stradivari of the guitar” and the Italian magazine Sei Corde hailed him as “the most important living stringed instrument maker”.

He has given courses on Spanish guitar-making in numerous countries, also lectures and seminars about the organology of the instrument. He has also given lectures on the history and development of the vihuela de mano and the Spanish guitar. He was a member of the Crafts Council of Great Britain for ten years.

Since 1995, he has lived in Guijosa, a rural district annexed to Sigüenza, in the northern part of the province of Guadalajara, Spain. In 2002, in collaboration with his wife Marian, published a Dictionary in English of stringed musical instrument makers and guitar makers of Spain titled The Vihuela de Mano and the Spanish Guitar. 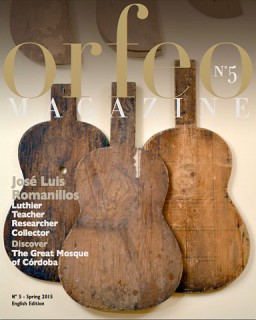 Orfeo Magazine published a feature article in their spring issue and 5th publication, which highlights the story of master luthier José Luis Romanillos who builds out of his workshop in Guijosa, Spain. Providing rich details about Antonio de Torres’ influence on Romanillos’ building style, as well as the impact Segovia’s 1913 Manuel Ramirez and Bream’s 1936 Hermann Hauser had as templates for Romanillos’ own guitars, this issue overshadows these influences with the Spanish luthier’s grand philosophy as a builder. Romanillos’ aesthetic approach is further presented very nicely as we’re informed about how his rosettes are influenced by mosque columns in Córdoba among other details. Click here to see the full issue of Orfeo.