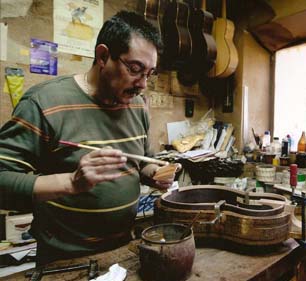 José Marín Plazuelo was born in Granada, on the 13th of June, 1960. He is the nephew of Antonio Marín Montero. In 1974, when he was just 14 years old, he started working alongside his uncle where him and José González López learned how to build instruments. From the very beginning, José’s uncle praised his nephew’s job. José follows Antonio Marín’s technique, he makes his own guitars in a traditional Spanish way. Nowadays José makes his own guitars even though he shares the workshop with his family, including his uncle who is one of the most prestigious luthiers in the world. José’s classical guitars are mainly inspired by the experience acquired from his uncle. However, his flamenco guitars are similar to those of Francisco Simplicio (1874 – 1932), a legendary guitar maker from Catalonia (Spain).