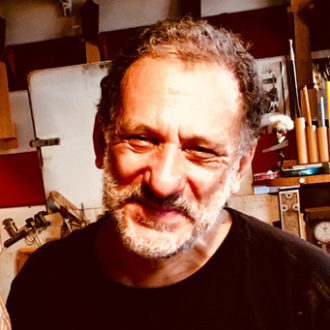 Oscar is originally from Argentina, and started his life as a guitar maker in Buenos Aires in 1982, initially under the tutelage of luthiers Pedro Malossetti and Héctor Curto. His early efforts produced a dazzling variety of different guitar types before he gradually refined his techniques and settled on the classical model, which he has built exclusively ever since. We met Oscar in Switzerland. He was introduced to us by Dominique Field, and we had several of Oscar’s guitars featured in our store since then. He currently lives on the Portuguese island of Madeira, off the northwest coast of Africa and set up a new workshop with an ocean view and controlled humidity.

See some of Oscar Trezzini’s guitars