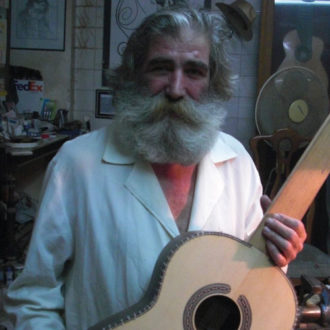 Rafael Moreno (b. 1954) began making guitars at the early age of 12, learning under the watchful eyes of both Manuel Lopez Bellido and Antonio Marin. In these early years, he also studied with Eduardo Ferrer, who some consider a ‘teacher of teachers,’ as he has taught other renowned luthiers, including the aforementioned Antonio Marín. In addition to this direct tutelage, he is also heavily influenced by the guitars of Miguel Rodríguez, Santos Hernandez, and Benito Ferrer. After years of apprenticeship, Moreno opened shop in the famous Cuesta de Gomerez, in Granada, where he remained until the year 2000. He has since been working at the Jesus and Maria 10 address. 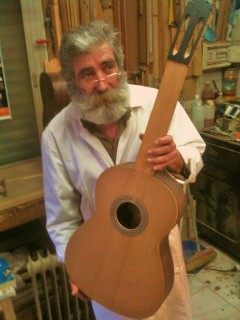 Moreno’s attention to detail is evident not only in the craftsmanship his guitars, but also in the meticulous organization of his workshop, where everything is carefully prepared and arranged. He works there without any assistance, as he refuses to hurry his work. He defines his building style as “timeless”, as it combines his years of traditional training with a newer, more personal touch. His guitars are designed seeking perfection and power, with a true quality to the tone.

He builds his guitars entirely from scratch, going so far as to carve the nut and saddle from solid bone, all by hand. For the most part, his stock of Brazilian rosewood, spruce and cedar comes from trees bought, cut, and cured entirely by him. Some of his spruce has been aging for more than 30 years. He makes his tops slightly thicker than average, which helps create a guitar that is structurally sound and will last indefinitely. Moreno makes only one level of guitar – he says that if he were to make a cheaper model, it would have to be of lesser quality, which he does not know how to do.

Rafael Moreno can easily find inspiration just being in his workshop. It is filled with hundreds of plated wine jars, each one bearing the name of the guest to whom it was offered. In here, he is constantly listening to great singers like Manuel Torre, Camaron or his friend Enrique Morente; or he may be talking with guitarists Juan or Pepe Habichuela, who, along with Pepe Romero and Celin Romero, are known to be fans of Moreno’s guitars, and they continue to acquire new instruments from him.

Rafael Moreno has also performed a great service to the guitar-making world by teaching students the art of lutherie, and continuing the Granada school of guitar building. We are proud to be representing his work here at GSI. 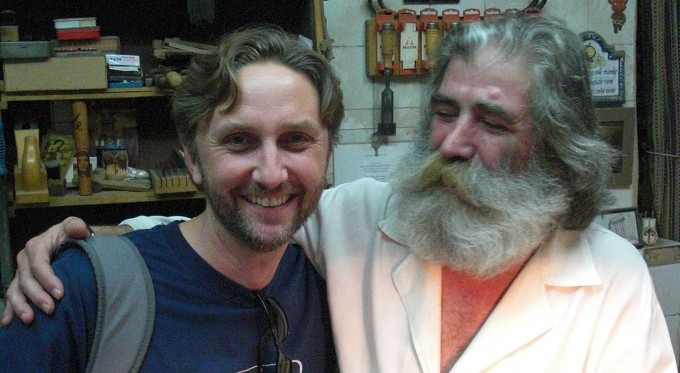