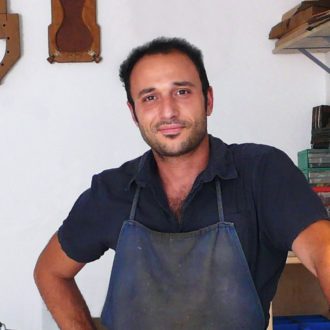 Valerio Licari was born in Rome, Italy, in 1981. As a teenager, his musical studies began with the classical guitar but he later learned to play other styles including acoustic fingerstyle, blues and ragtime, and eventually even started taking violin lessons. His academic work was entirely focused on music, including work in ethnomusicology, musical art and performance. He even enrolled in the International School of Violin Making “Antonio Stradivari” in Cremona and did an internship in bow making, ultimately receiving his diploma from this respected institution. In 2012, after working for six months as guitar wood production manager at Tonewood International in Cremona, he moved to Malaga, Spain, for a six-month apprenticeship with classical guitar maker Daniele Chiesa. It was at this time that he decided to settle in Spain – in order to more deeply study its traditional methods in classical and flamenco guitar making. He set up his workshop in Granada where he has remained until late 2019, when he decided to move back to his come country of Italy.

See some of VALERIO LICARI’s guitars