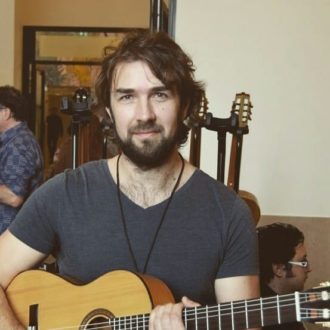 The goal of my guitars is to give you goosebumps when you hold them in your hands.

After becoming a full-time luthier Youri’s career started to thrive. He participated twice in the Antonio Marín Montero International Competition in Granada. Even though during the first edition of the competition he didn’t win a prize, his craftsmanship attracted the attention of Guitar Salon International. In the second edition, he won the 2nd prize. The start of his career was extraordinary. After only a few years of guitar making, he became a fully-booked luthier.

Youri’s goal is to do everything himself- from cutting the wood to creating fine inlays and designing his own rosettes. Youri also plays the guitar and knows what desired sound he would look for as a player. All parts of his guitars are handmade with the exception of pre-made tuning machines. Youri’s guitars are also characteristic for using only traditional methods. He uses natural resins for the French Polish and animal instead of synthetic glue. The goal is to have no negative impact on the environment. Youri favors local woods from the area where he lives to save the exotic woods that are very popular among other luthiers.

See some of YOURI SOROKA’s guitars