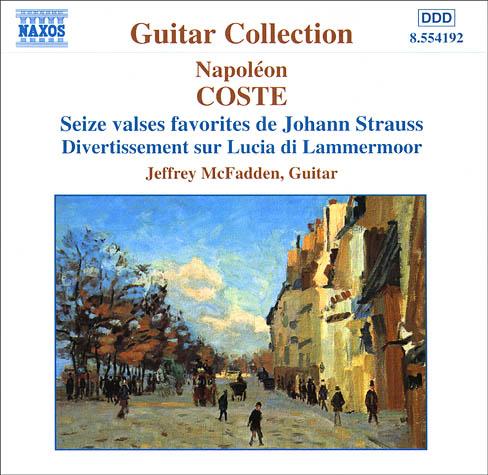 Napolean Coste became one of the most influential guitar composers of the mid 19th century. Based in Paris, he became a friend and a pupil of Fernando Sor and was a virtuoso exponent of the instrument until an injury to his arm prevented further public performance.

Coste`s "Divertissement sur Lucia di Lammermoor" and "Seize valses favorites de Johann Strauss" are potpourris of best-loved melodies largely typical of guitar repertoire at this time. Coste`s "Caprice" pays tribute to the popularity of Spanish "national" music while the "Rondeau de concert" is an early example of the can-can which was to gain such popularity over succeeding decades.

About the artist: Jeffery McFadden is recognized as one of Canada`s finest young guitarists. Over the past years, concert engagements have taken him into Canada`s West, to Quebec, to the United States and throughout his native Ontario. He has given World Premieres of works by both Canadian and American composers and has been a featured performer at Canada`s major guitar festivals. In November 1992, he was awarded a top prize in the prestigious Guitar Foundation of America Competition held in New Orleans. He was also prizewinner in the 1993 Great Lakes Guitar Competition held near Cleveland, Ohio. In addition to his activities as a solo guitarist, Jeffrey McFadden is frewunetly heard in chamber music settings, performing with Toronto`s New Music Concert Ensemble and smaller groups. He also performed in the premiere of The Enchanted Forest, a music drama by Canada`s leading composer, Murray Schafer. He has appeared both as chamber musician and soloist on CBC Radio. McFadden holds a Master`s degree form the University of Toronto, where he studied with Norbert Kraft. In addition to his performing career he is active in teaching and publishing with teaching positions at McMaster University and at the Royal Conservatory of Music. 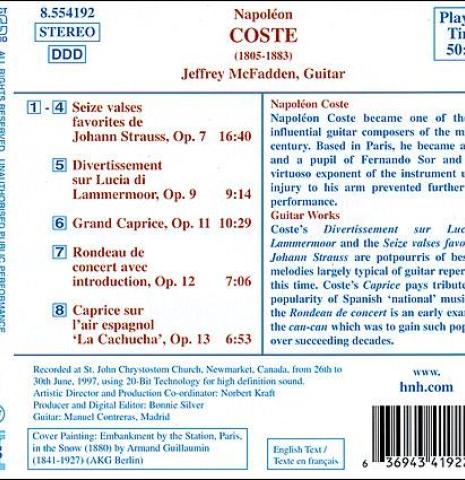