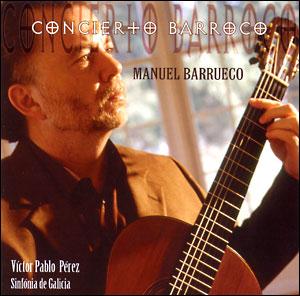 ABOUT THE ARTIST: Manuel Barrueco is recognized as a leading figure in the guitar world today. His artistry has been continually described as that of a superb instrumentalist and an elegant musician, possessing a seductive sound and uncommon lyrical gifts.

His international tours take him to some of the most important musical centers in the world each season.Recent appearances have included the Royal Albert Hall in London, New York's Lincoln Center, Washington's Kennedy Center, Philharmonie in Berlin, Concertgebouw in Amsterdam, Teatro Real in Madrid, Vienna's Musikverein, Salzburg's Grosses Festspielhaus and the Hollywood Bowl in Los Angeles.

He has been a soloist with such orchestras as the Boston Symphony, Philadelphia Orchestra, Los Angeles Philharmonic, Helsinki Philharmonic, Japan's NHK Symphony Orchestra and the Royal Philharmonic Orchestra in England.

Manuel Barrueco has made well over a dozen recordings for EMI. Of his most recent, "Cuba", was called "an extraordinary musical achievement" by the San Francisco Chronicle, while his recording of Joaquin Rodrigo's "Concierto de Aranjuez" with conductor/tenor Placido Domingo and the Philharmonic Orchestra, was mentioned as the best recording of that piece in Classic CD Magazine. His "Nylon and Steel" is a collection of duos with guitar greats: Al Di Meola, Steve Morse (Deep Purple) and Andy Summers (The Police), further demonstrating his outstanding versatility and imaginative programming. This recording of Roberto Sierra's Folias and Concierto Barroco, and Arvo Part's Fratres marks Barrueco's debut on the Koch International Classics label.

Mr. Barrueco's commitment to contemporary music and to the expansion of the guitar repertoire has led him to collaborations with many distinguished composers such as Toru Takemitsu, Roberto Sierra, Steven Stucky and Arvo Part. His performances have been broadcast by television stations such as NHK in Japan, Bayerische Rundfunk in Germany and RTVE in Spain. In the United States, he has been featured in a Lexus car commercial, "CBS Sunday Morning", A & E's "Breakfast with the Arts" and Mister Rogers' Neighborhood".

Manuel Barrueco began playing the guitar at the age of eight and he attended the Esteban Salas Conservatory in his native Santiago de Cuba. He emigrated with his family to the United States in 1967, later completing his advanced studies at the Peabody Conservatory of Music. 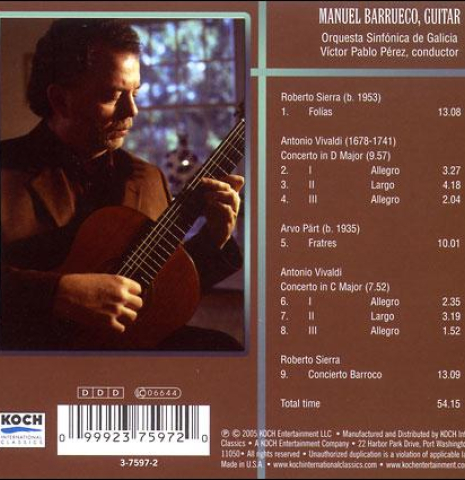