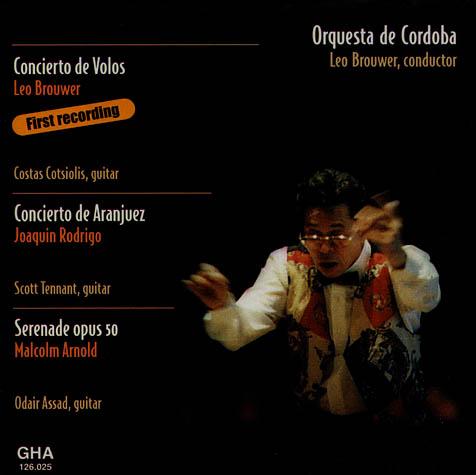 The Concierto de Volos — Leo Brouwer’s sixth guitar concerto — was composed in 1996 at the request of Costas Cotsiolis. It was therefore dedicated to this talented Greek guitarist. The concerto was premiered in Volos during the summer of 1997.

"As it is the case for most of the guitar concertos that preceded it, the Concierto de Volos reflects more the personality of the person to whom it is dedicated than the countryside or local culture to which it seems to refer — the Concierto elegíaco is a portrait of Julian Bream, like the Concierto de Toronto was written in the image of John Williams. The different parts of the Concierto de Volos, lento-allegro-lento-allegro, are inspired by the baroque form of the sonata da chiesa for the structure, but the melancholy climate and tender of the slow movements conform to the idea I have of Costas Cotsiolis. One finds reminders and citations of the atmospheres and themes of the Black Sea and the Mediterranean Sea in the thematic material. I used a theme in the finale that both the Greeks and the Bulgarians respectively claim to have fathered. As for the slow motifs, they are original yet still in the Byzantine spirit". - Leo Brouwer

Joaquin Rodrigo was thinking of his wife, the Turkish pianist Victoria Kamhi, when he wrote the Concierto de Aranjuez in 1939, which has subsequently become the most played guitar concerto of our time. The concerto's adagio was composed while Victoria was gravely ill, and the chords at the beginning of this movement evoke the beating of her heart.

"The day before the recording at the end of July 1997", says Scott Tennant, "I found myself in Madrid where I was to meet Cecília Rodrigo, the daughter of Joaquín and Victoria. That morning, she told me our meeting wasn't going to happen - her mother had just passed away. This event definitely affected my interpretation of the concerto, particularly of its slow movement. I felt a lot of emotion playing the beats of a heart that had just been silenced."

Everyone has heard the music from the film The Bridge on the River Kwai. But did you know that it was Malcolm Arnold who composed this world-renowned score for which he won an Oscar? Born in Nothampton, England, in 1921, he was pupil of Gordon Jacob for composition and of Ernest Hall for trumpet. He subsequently was first trumpet in the London Philharmonic Orchestra. Among his numerous and diversified works are two compositions for guitar and orchestra: the Serenade opus 50, written in 1955, — a kind of short musical entertainment — and the Guitar Concerto opus 67, written in 1959. In both of the works, written for Julian Bream, Arnold appears as a fine melodist rather than a developer of themes. 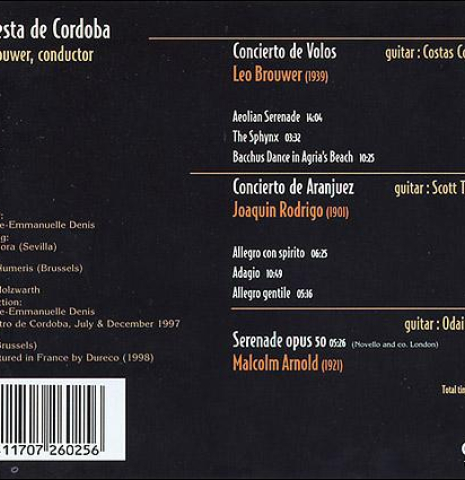 Background
The Orquesta de Córdoba was created in 1992 by the regional Counsel of Andalusia and the municipality of Córdoba. Artistic direction of the orchestra was entrusted to the composer and conductor Leo Brouwer. Among the motives for his designation also as the conductor of this orchestra, the Orquesta de Córdoba was pleased to remind and underline the master's vast experience, his international prestige and especially his enthusiasm with which he assumed under all aspects the enormous mission involved in the creation of a new orchestra. Composer, guitarist and director, Leo Brouwer was born in Havana, Cuba, in 1939. He studied with Nicola Pujol's pupil and, specializing in composition, completed his studies at the Julliard School of Music and at Hartford Music Department. In 1987, Brouwer was selected along with Isaac Stern and Alan Danielou, to be an honorable member of UNESCO, in recognition of his music career - an honor that he shares with Menuhin, Shankar, Sutherland and other giants of music. Brouwer has conducted orchestras around the world including the Berlin Philharmonic Orchestra, the Scottish National Symphony Orchestra, the BBC Chamber Orchestra and the Mexico National Symphony Orchestra. He has been heard as both composer and classical guitarist at virtually every major music event in the world, and is also the author of the famous work Canción de gesta (Epic Poem), recorded and played by the most important orchestras in the world. His discography is comprised of over a hundred commercial recordings. His works have been recorded by personalities such as John Williams, Julian Bream, Odair Assad, Franz Bruggen, Harry Sparnay, as well as musical centers such as the Toronto Festival, the BBC Chamber Orchestra and the Liège Festival among others. In 1993, he composed the music for Alfonso Arau's internationally acclaimed, award winning Like Water for Chocolate. He also serves as General Manager of the Cuban National Symphony Orchestra, and from 1992 to 2001, has been conductor of the Córdoba Orchestra in Spain.