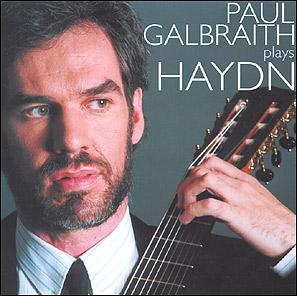 "Haydn`s suitability for the guitar was an early discovery for me. Even as a nine-year-old, I gravitated toward the music of Mozart and Haydn, and was soon trying out piano music of both composers on my six-string guitar. I found that Mozart was difficult to transcribe for my instrument, whereas Haydn looked really playable - tantalisingly so.

Haydn piano sonatas quickly became a kind of regular hobby with me, as I would constantly return to the Haydn book I had, each time with slightly more success than on the previous visit.

But my eureka moment with Haydn had in turn opened up to me a favorite Brahms piece (the Variations Op. 21a), and that piece had pushed the six strings to - and beyond - their limits.

I needed an instrument which would enable me to realise more fully and completely this glorious music. Working together with luthier David Rubio, we came up with the eight-string "Brahms Guitar," so called because you could play Brahms on it!

The result for the Haydn sonatas was that they too finally fell into place. They not only sounded fuller and better, but they felt right, as if Haydn himself has has an intimate knowledge of this instrument, and had written these extrordinary works especially for it."

"He has brought revolutionary change to playing the guitar... an amazing clarity and a huge dynamic range I have never before heard from any guitarist." The Times of London

"I`ve never heard anyone play like this." Classical Guitar

"Galbraith achieved a considerable feat in both transcribing and committing to memory Bach`s six solo Sonatas and Partitas, and went on to play them with a real sense of having something to communicate in the music, rather than simply technical virtuosity... a luscious augmentation of instrumental sonority and colour made this concert a thoroughly enjoyable experience. Both Galbraith and his instrument have the potential to do remarkable things." Glasgow Herald

Paul Galbraith`s double CD of the Complete Solo Bach Violin Sonatas and Partitas (Delos) was nominated for a 1998 GRAMMY AWARD in the category of Best Solo Instrumental Album. This recording was also chosen as one of the two best CDs of 1998 by Gramophone Magazine, received a `Four Star` rating in Stereo Review, and reached the TOP 10 of the classical charts in Billboard.

Galbraith was recently featured on National Public Radio`s `All Things Considered` and `Performance Today`. He toured the U.S. last year as soloist with the Moscow Chamber Orchestra, performing his guitar arrangement of the Bach F minor Keyboard Concerto. He also performed this concerto with the National Chamber Orchestra of Chile in Prague`s Dvorak Hall. In 1999, Galbraith performed at the Los Angeles Bach Festival as well as in San Diego, San Jose, Berkeley, and Denver.

In August `99 he makes his New York debut at the Frick Collection, and gives a return engagement to the Caramoor Summer Festival. Highlights of his 1999-2000 season include appearances on Lincoln Center`s `Great Performances` series and in Philadelphia, Washington DC, Baltimore, Milwaukee, Seattle, Santa Barbara and many other cities. Recent and forthcoming recordings on Delos include discs of Haydn keyboard sonatas (Delos 3239), the Complete Bach lute suites, Bach keyboard concertos and international Folk Songs.

Galbraith first won public acclaim in Great Britain when at the age of 17 his performance at the Segovia International Guitar Competition won him the Silver Medal. Segovia, who was present for the competition, called his playing magnificent. The following year he went on to win BBC T.V.`s YOUNG MUSICIAN OF THE YEAR Award. These awards helped launch an international career including engagements with some of the finest orchestras in Britain and Europe (Royal Philharmonic, Chamber Orchestra of Europe, BBC Philharmonic, Scottish Symphony Orchestra, English Chamber Orchestra, BBC Scottish Orchestra, Scottish Baroque Orchestra, Ulster Orchestra, Hall Orchestra and Scottish Chamber Orchestra among them). He has toured the U.S., Canada, Spain, Italy, Greece, the Czech Republic, Norway, Hungary, Brazil, China, India and Iceland.

Galbraith`s unique playing position was first revealed at the Edinburgh Festival in1989. His guitar (designed in collaboration with luthier David Rubio) has two extra strings, one high, one low, and is supported by a metal endpin (similar to that of a cello) which rests on a wooden resonance box. Both the guitar`s extraordinary design, and Galbraith`s playing style, are considered groundbreaking development in the history of the instrument and its performance practice, increasing the guitar`s expressive range to an unprecedented extent.

Paul Galbraith was born in Scotland, and has lived for extended periods in Malawi, Greece, London, and, currently, Brazil, where he is a member of the Brazilian Guitar Quartet.

His principal teacher, since 1983, has been the Greek conductor, pianist and philosopher George Hadjinikos. 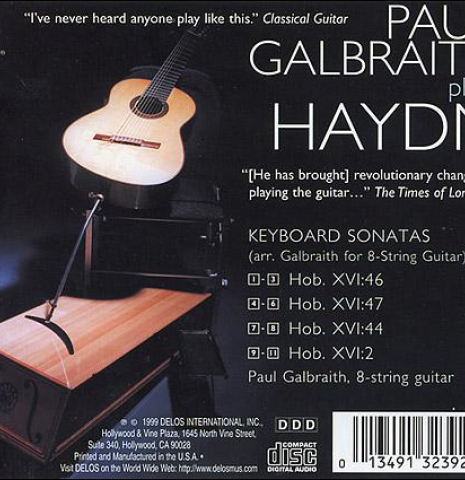