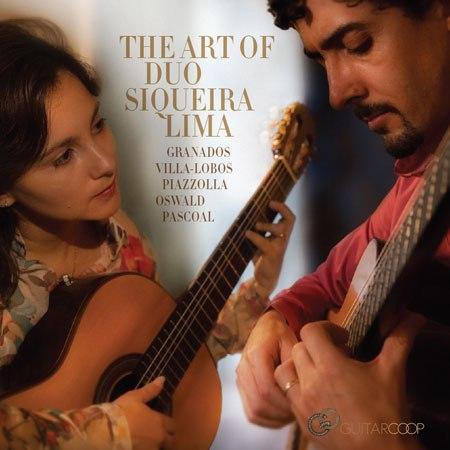 Duo Siqueira Lima Formed by Uruguayan Cecilia Siqueira and by Brazilian Fernando de Lima, the Duo Siqueira Lima is one of the most prestigious guitar duos nowadays. With a work linking the classical to Brazilian instrumental they are recognized by their technical virtuosity, interpretation, perfect ensemble and their daring and original arrangements for two guitars.

The first meeting between Fernando and Cecilia was marked by a historic event in their careers, which occurred in the international guitar competition which was held in the year 2001 in Caxias do Sul (Brazil). Among all participants, who came from various countries, they shared the first place. This fact was of utter importance for the formation of the Siqueira Lima Duo and for their early international career. Their latest recording album, “Um a Um” (2010), was released in Europe and the United States by the acclaimed Belgian GHA Records label. Their second CD “Lado a Lado – Side by Side” (2006), revealed the intimacy of the Duo with Brazilian music and opened the doors to a broader musical universe, in addition to the classic music. Currently, they are requested in both chamber music series on popular music or Jazz festivals.

The Siqueira Lima Duo is very often invited to perform with symphonic orchestras, such as the São Paulo Metropolitan Orchestra and the Chamber Orchestra of the University of São Paulo. They also teach Workshops and Master Classes in various music festivals and institutions around the world, as at the Conservatoire Royal de Liège (Liège-Belgium), XIV Wiosenne Koncerty Gitarowe (Szczecin-Poland), University of Florida (Gainesville, FloridaUSA), SMU Meadows School of Arts (Fort Worth, Texas-USA), Festival de Música do Pará (Belém-Brazil) Conservatório Dramático e Musical de Tatuí (Tatuí, São Paulo – Brazil), Conservatorio y Escuela de Música de Irún (Irún – Spain) among others. Duo Siqueira Lima, together with the great Brazilian clarinetist and conductor, Paulo Moura, undertook an important project covering the works of Radamés Gnattali and Astor Piazzolla which culminated in a concert in Sao Paulo sponsored by SESC received by the public and critics both with great acclaim