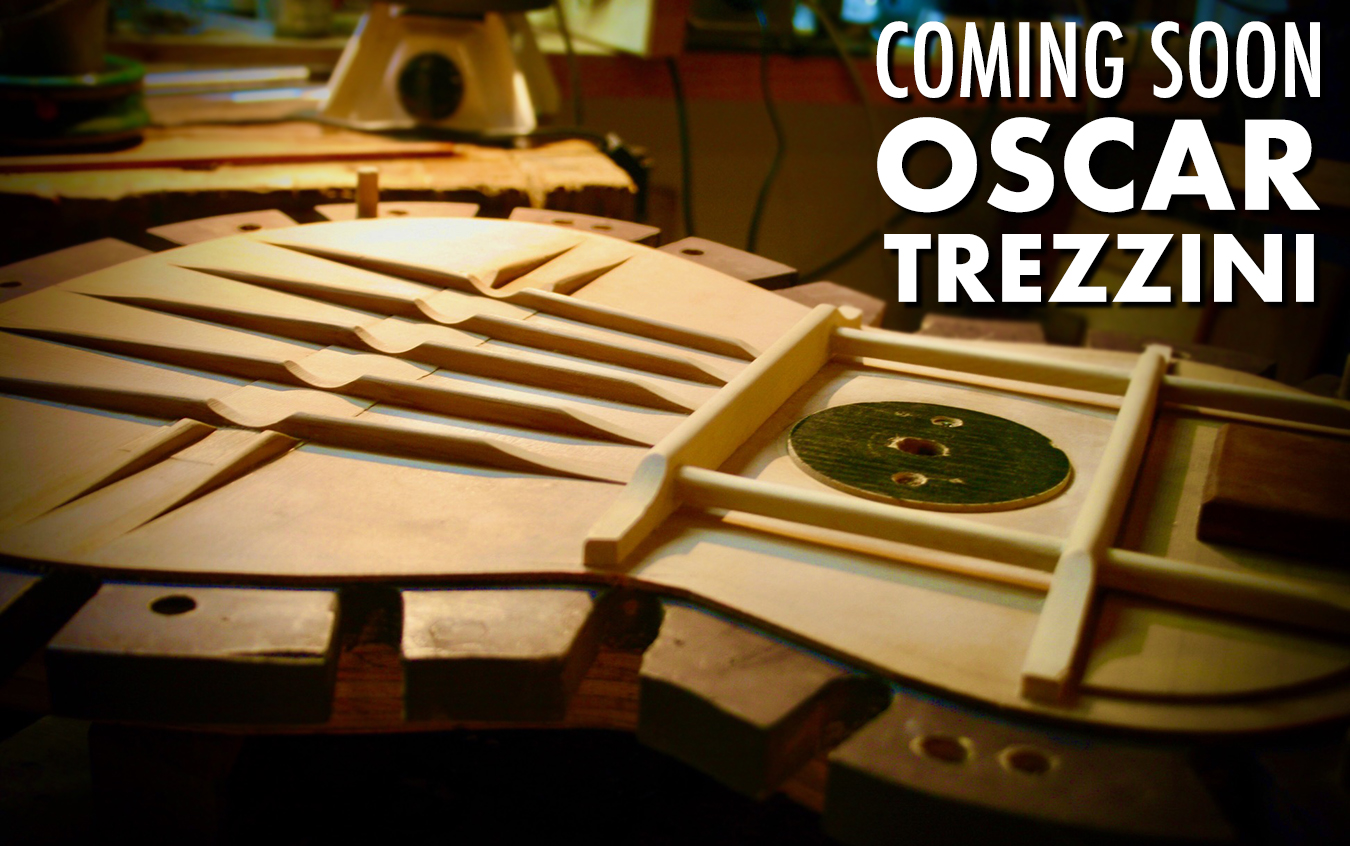 It’s been awhile since we’ve heard from luthier Oscar Trezzini who has been on the move and making some very interesting changes these past several years. We first met him and took interest in his work in 2007 when he was then living in Switzerland.

Oscar is originally from Argentina, and started his life as a guitar maker in Buenos Aires in 1982, initially under the tutelage of luthiers Pedro Malossetti and Héctor Curto. His early efforts produced a dazzling variety of different guitar types before he gradually refined his techniques and settled on the classical model, which he has built exclusively ever since. Once in Switzerland, we were introduced to him by Dominique Field, and we had several of Oscar’s guitars here in the ensuing years before losing touch with him. He recently re-established contact with us to let us know that he has just settled on the Portuguese island of Madeira, off the northwest coast of Africa and set up a new workshop with an ocean view and controlled humidity. His first guitars are already coming out and what a surprise they are…

Turns out in the intervening years Oscar was able to meet and befriend Daniel Friederich and acquire from him some very interesting items from his workshop, including several partially-built Friederich soundboards, Honduran mahogany for necks, and even the workbenches of both Friederich and of Robert Bouchet! Additionally, he also has many of their handtools, measuring devices and power tools, each small saw or machine has handwritten notes with dates and usage tips. Oscar admits that while having these workbenches and tools won’t necessarily make his guitars better, having them will remind him daily of his great affection and admiration for Daniel, which does create a flair of inspiration that is likely to manifest somehow in his work.

With Oscar’s advice, we selected materials for the next guitar he is building for us. As you can see in the photos, we have an exquisite set of marbled CSA rosewood with sap elements intertwined in the plumes of the darker hartwood. But, it gets better – Oscar was choosing between two cedar tops and decided to build two guitars simultaneously! Both tops were started by Friederich – you’ll notice in the photos the penciled measurements in Friederich’s hand, which he did after conducting his physical tests on the wood to note the results of the longitudinal and combined tension in addition to the density. As you can see the rosette areas are already emptied to embed the rosettes, and so Oscar has modified his rosette design to accommodate Friederich’s measurements exactly when the time comes to inlay his rosette. Additionally, from Friederich’s stock our guitar will have his African ebony for the fretboard, CSA Rosewood for the bridge and Honduran mahogany for the neck. For the tuning machines, Oscar continues to use Rodgers.

In one of the guitars, Oscar is going to use one of the pre-worked necks by Daniel Friederich, with wood dated from 1960. However, he is going to replace Daniel’s scarf head-joint in favor of his method that he has been using for more than 25 years. It was Pedro Malosetti who taught Oscar how to make the joint connecting a headstock with a neck. Pedro was a very creative and prolific craftsman. He built classical guitars, Selmer / Maccaferri, as well as arch-top and steel string guitars. The joint is very solid but requires a certain level of skill. At first Oscar thought that all guitar-makers used this technique. However, soon he realized that it was Malosetti’s original technique. Malosetti was very humble and didn’t tell Oscar that the application of this method in guitar making was his idea.

In the video below, you can see how the joint works. It’s necessary to make a wedge-shaped neck with its sides set at a perfect angle. This allows a carved ramp in the headstock to slide in and connect with the neck. Of course, it’s also glued to secure it.

This method is slightly similar to “scroll-grafting”, a method used by some luthiers in violinmaking. Many string instruments have grafted scrolls. This technique is often used in restoration to adjust baroque period instruments to the modern setup.

A few years ago, Oscar decided to make his own contribution to Pedro’s technique by slightly changing the angles. Thanks to adjustment, he doesn’t need to use a press and can connect the parts only with some slight manual pressure. Even though there are other methods of connecting the headstock with the neck, Oscar prefers this technique as this is also a tribute to Pedro Malosetti, his mentor and a very generous man.

See the sneak peek photos below. Both instruments look wonderful! Oscar shared with us that the guitars are different, but it’s impossible to decide which one is better. 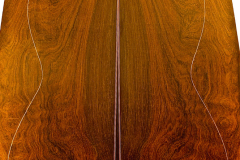 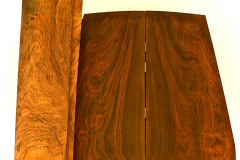 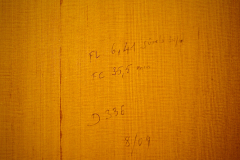 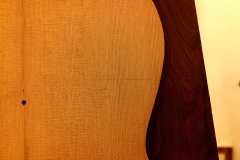 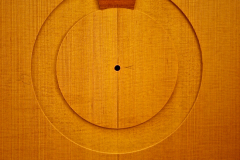 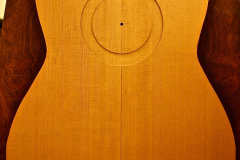 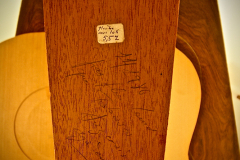 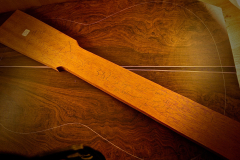 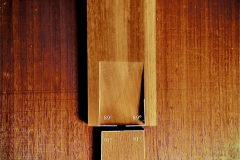 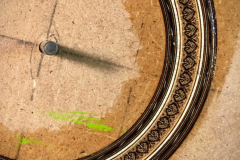 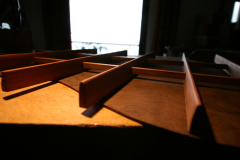 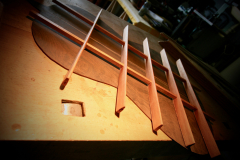 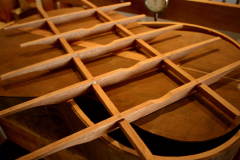 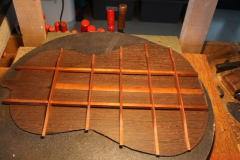 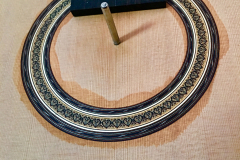 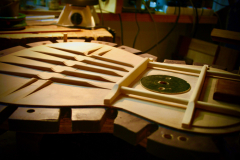 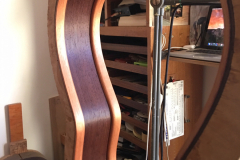 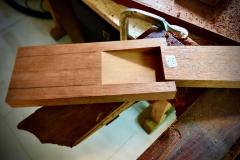 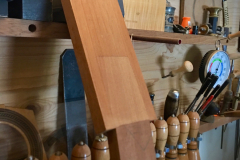 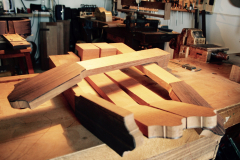 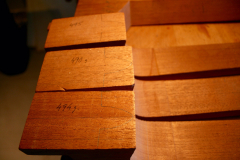 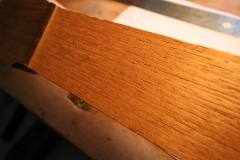 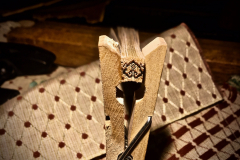