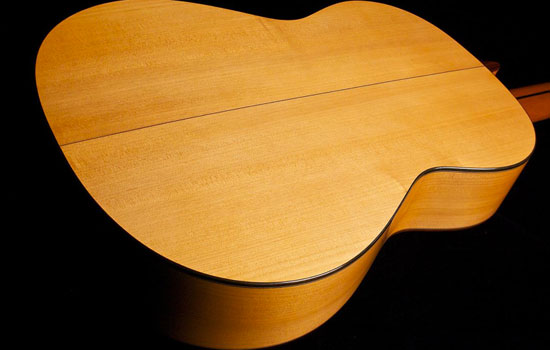 We just got three new guitars in from Hermanos Camps in Spain. I had heard of them, but I don’t think had ever played one, and I was a little surprised by just how good they are, so I thought I’d write a little review.

There are three models – the Primera Blanca, the Primera Negra, and the Primera A (which has a slightly different soundboard, even nicer wood, a 20th fret and upgraded tuners) – but I think that what they have in common is actually more important than the differences between them.

The first thing I noticed is that they feel like flamenco guitars, in that they’re really light and if you look you can even see that the top is pretty thin. The workmanship is excellent and the guitars kind of look expensive and definitely well-made. There’s nothing ‘factory’ about these. But of course playing the guitars is what matters, and I’m not sure if I was more impressed by how they feel or how they sound.

One of the things that separates even really excellent ‘student’ models from luthier-made guitars is that they tend not to play as easily – and when you get a perfectly set up guitar in your hands you notice it right away. All three of these guitars have that perfectly set up feeling, so that even without a capo there was nothing difficult about playing them, and in fact I found them easier to play than a lot of other more expensive guitars I’ve played (and one I own…). I should also say that while some guitars are ‘too’ easy to play for me (strings really close to the fretboard and sometimes to the top itself), these didn’t have that. I know that some people look for that in a guitar, but it’s not my thing, so I was happy that these guitars had the right amount of resistance for the right hand without feeling in any way hard for the left. Scale length is 650mm and width at the nut is 52mm on all three models.

And then there’s the sound. The thing about a flamenco (for me, of course – I’m obviously basing all of this on what I like and I don’t pretend to be objective here) is that balance between the pretty and the growl. You need some buzz, but of course there’s a limit and it’s all very subtle. When you play a rasgueado you want that sound to shoot out fast and to pack some punch, and all of these guitars have that sound in spades, without sounding all buzzy when you’re playing single notes, arpeggios, etc… You could play classical on these guitars, but I don’t know that you’d want to – these are straight up flamenco guitars that do exactly what they’re supposed to do. That said, the negra does have a little extra roundness and sustain without in any way losing its growl when you push it in the right way. If you want a guitar to play both flamenco and classical on I’d choose this one, but you’re going to want to play flamenco on it (just saying).

I’m really amazed at just how good these guitars are for, and for the money I can’t even imagine a better flamenco guitar. I honestly hesitate to call these ‘budget’ or ‘student’ guitars, and if I needed a guitar for a gig or a concert I would be perfectly happy to play any one of these three guitars (and I’m a little spoiled, as you can imagine). Sorry for all the gushing, but I’m really impressed. I hope the video gives an idea of what I’m talking about.