Secrets of Lutherie: The Cedar Soundboard - An Italian Invention 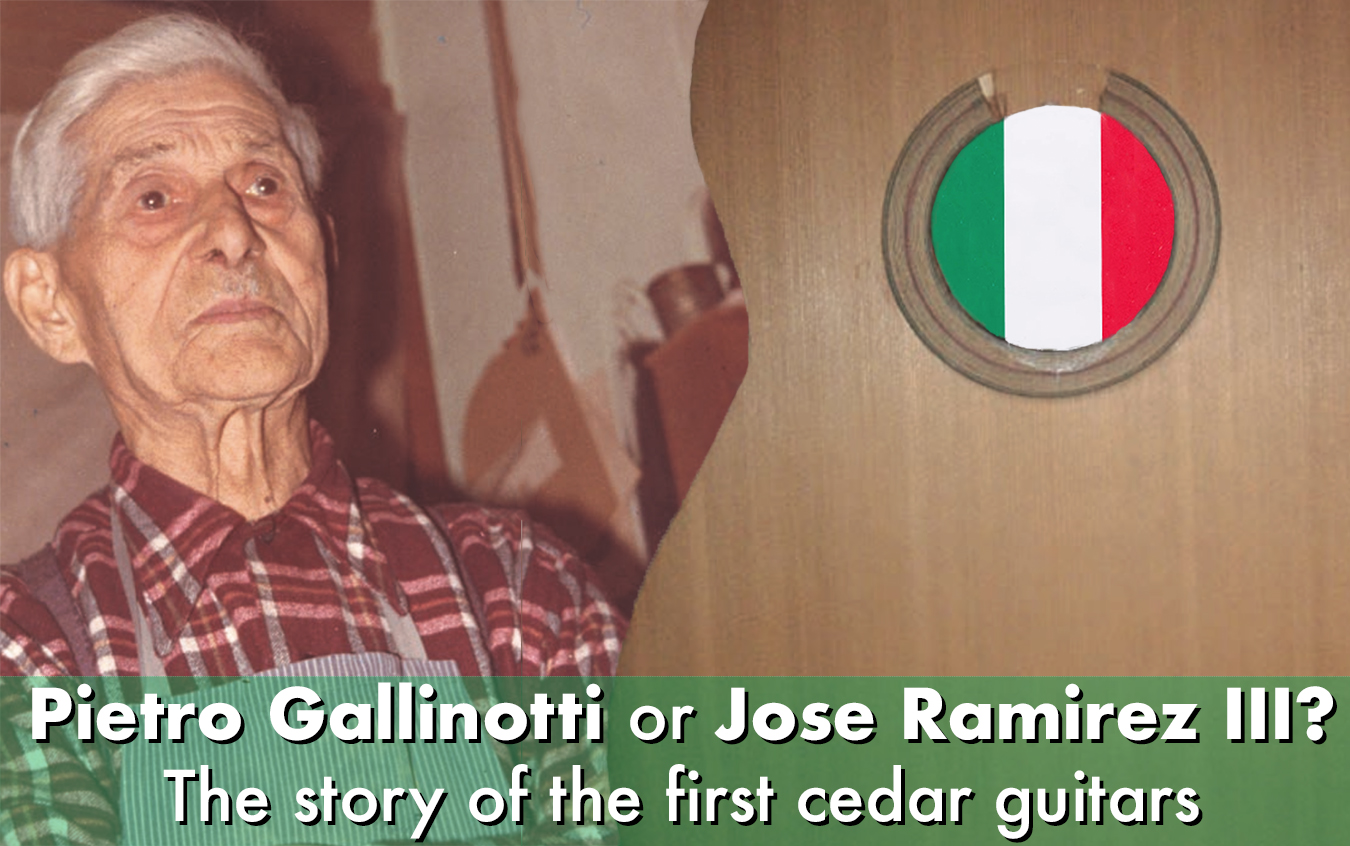 Luthier and organologist MARIO GRIMALDI from Crotone (Italy) in his book dedicated to Pietro Gallinotti (1885-1979) reports that this luthier from Solero, as far back as 1952, had built a guitar with a soundboard made from Thuja Plicata, a wood also known as Western Red Cedar. This guitar was awarded a prize in a lutherie competition in Torino that same year. This guitar pre-dates by at least ten years the famous instruments from the Jose Ramirez III shop in Madrid, which has traditionally been credited as the first to use this material for the soundboard.

This article by Mario Grimaldi continues in greater detail the news which was published for the first time (as far as I know) in 2007 (Pietro Gallinotti/Luthier from Solero, Rosa Sonora, third edition, Solero 2007 by Mario Dell’Ara, page 12) in the catalogue of an exhibition organized in Solero, Alessandria. In the description of a 1952 guitar by Pietro Gallinotti the following is written:

“Guitar awarded at the lutherie contest announced in Torino in 1952; on the label is written: ‘Lutherie contest Torino first award’. Owned by the guitarist Carlo Ernesto Salio, also played by M° Alirio Diaz. After Salio’s death in 1970, the guitar was acquired by Antonio Migliore, (the owner at the time), in the music shop Damaso in Torino. The owner of the shop was the daughter of publisher Damaso and wife of Salio. Inspired by Julian Gomez Ramirez’s models, the guitar has a cedar soundboard – a wood that Gallinotti had been experimenting with years before Ramirez III.”

Some years later, Antonio Migliore sold the guitar to Bruno Giuffredi who is the present owner. He’s a guitar teacher at the Novara Conservatory ‘Cantelli’ and is a huge endorser of Gallinotti guitars, which he uses both for concerts and recording.

In his published work, Jose Ramirez III said the following:

“At about that time, I discovered an extraordinary wood that had great advantages over the German spruce which had been used for time immemorial to build guitar harmonic bellies. Its scientific name is THUJA PLICATA, erroneously called Red Western Cedar in lumber jargon, and was presented to me as a common cedar. I immediately saw its extraordinary features of lightness, resistance, sensitivity and, most particularly, its magnificent grains, which were superior to the best aged German spruce. […] I lost no time in building a guitar with this wood and the results were excellent in all respects.” (Josè Ramirez III, Things About the Guitar, Soneto, Madrid, page 202. As regards the construction period of his first guitar with the top in Thuja Plicata, from the text we can certainly deduce that it was c. 1962.)

Western red cedar is actually the common name of Thuja Plicata. Josè Ramirez III thought this name was wrong, but we know precisely which wood he was referring to. Basically, there’s no need to establish a chronological primacy of merit in the use of thuja plicata in guitar construction, since it’s clear that Gallinotti followed his intuition and we have no evidence to think that Josè Ramirez III made use of a Gallinotti’s discovery.

However, it is wrong to omit the name of the Gallinotti next to the name of Josè Ramirez III, as is usually done.

Mario Grimaldi from Montalto Bormida is perhaps the most knowledgeable of Gallinotti’s work among current Italian luthiers. What he has written below allows increases our historical knowledge and perhaps more importantly, gives us a fresh reason to appreciate Gallinotti’s work, since he employed western red cedar for his soundboard as the result of his intuition, without any external influence. Against any doubt that the 1952 guitar’s soundboard may have been replaced later, Mario Grimaldi reminds us that whenever Gallinotti did repair work, would always add a second signed and dated label to this effect. This 1952 guitar has only one label. Furthermore, we have the witness of M° Mario Dall’Ara (specifically requested by the undersigned). He is biographer and researcher of Gallinotti’s work and together with Grimaldi is the writer of the catalogues mentioned above. He writes (in his e-mail sent to Angelo Gilardino on November 3, 2018):

“In the early 1960s I used to go periodically from Asti, where I lived, to Turin to visit the Damaso shop where M° Carlo Salio used to give me guitar lessons. One day he entrusted me his guitar made by Pietro Gallinotti because he wanted me to bring it to Solero for minor repair work. That was the guitar that Salio purchased from Gallinotti just after the Torino competition in 1952, the one with the cedar top. I saw the same guitar, about 10 years ago, in Santena at the home of an old M° Salio’s pupil, who got hold of the instrument after Salio’s death. The emotion was as great and identical as the first time I saw it.” – Mario Dell’Ara, Moncalieri, November 2, 2018

CHRONICLE OF A DISCOVERY by Mario Grimaldi

A guitar with cedar used for the top was built by Pietro Gallinotti in 1952. This was verified in 2007 during a musical instrument exhibition dedicated to Gallinotti, organized by the City Hall of Solero, the town near Alessandria where Gallinotti lived and worked.

I was called to collaborate in the preparation of the event. I was asked to re-create, in one of the rooms in Solero Castle, Gallinotti’s workshop, since I had reported to the Council Administration the existence of an old workbench in the garage of Gallinotti’s old house, which changed ownership after his death in 1979. Also, Carlo Gallinotti, Pietro’s son and his only assistant, gifted to me many of the original items belonging to his father that had been kept in his workshop. This gave me enough material to recreate the workshop setting quite accurately. A large number of instruments were shown as the catalogue illustrates. That was not the first exhibition dedicated to Gallinotti, since in 2006 a huge exhibition was organized by the Savigliano City Hall. I was appointed on that occasion also to write the data sheets that were published in the catalogue. (Mario Dell’Ara, Mario Grimaldi, Pietro Gallinotti, Liutaio di Soler, Rosa Sonora, II edition, Savigliano 2006).

During the Solero exhibition’s staging, the organizers felt it would be important to choose and catalog some instruments that hadn’t been shown in the previous Savigliano exhibition in order to offer readers of the two catalogues a wide, organized (although not complete) view of Gallinotti’s work. We had instruments of great variety, as for example three guitars given by Alberto Mautino’s heirs. Mautino was a guitarist and a teacher from Torino; he was a Gallinotti’s friend and customer. Those guitars belong to three different eras of Gallinotti’s output (1. 1951 with tornavoz, 2. 1966 – this guitar, that reveals the highest point of his stylistic maturity, now in Gilardino’s collection. And 3. 1970).

However, the most important guitar for historical purposes was the one lent by Antonio Migliore from Santena (Torino). Built in 1952, the guitar received first prize in the guitar making competition the same year in Torino, with Carlo Palladino, a guitarist from Genova, as the jury’s president. The instrument label reported the award announcement.

In order to properly complete the data sheet for the catalog, I needed to examine the instrument thoroughly, both the exterior as well as the inside. At first look, it appeared to me that the top seemed to be made of a spruce that was much darker than the typical stained varnish of Gallinotti’s guitars of that period. I also inspected the underside of the top, which was unfinished. Since it was as dark as the outside, I suddenly thought that it must be cedar and only became convinced after a second examination. Some species of woods are recognizable (apart from the color tone and the grain) from their particular smell – you can just rub your hand on the wood to understand what it is. I had to dampen a little internal portion of the top to get the confirmation that it was unquestionably cedar (thuja plicata). I also verified that three of the seven fan strut braces were of cedar (on the bass side) and the other four were in spruce. The two soundhole reinforcements were in cedar as well. Another interesting detail was that it was a four-piece top.

More corroborating evidence dates back to 2002, back when Carlo Gallinotti gifted to me many of the old items that belonged to his father, as previously mentioned. This included molds, hand tools, a lathe, a bending iron, rough pieces of bone, rough bridges, templates and wood such as rosewood, cherry, paduk, rough mahogany necks, mahogany back and sides, rosettes, joined soundboards (some of them with partially inlayed rosettes) which included several cedar tops. The most important of all these items were two cedar joists and some slices cut from them: these surviving pieces of wood definitively verify that Gallinotti had realized the potential of cedar and experimented with it for the guitar that would win the Torino competition. Additionally, I compared the joist sizes with the plans of the 1952 guitar, and they perfectly matched! A later scientific analysis re-confirmed this conclusion, however since I was not involved in the project, I can’t give more details here, but I hope the results will be published soon.

Although a few other cedar-topped instruments were built after 1952 from the joists mentioned above, Gallinotti didn’t persevere in the use of this wood for his guitars. This is probably due to market conditions – at that time cedar was not used by other luthiers, making it difficult to purchase in its proper size by wood dealers. So this lack of availability forced Gallinotti to build only few guitars with four-piece soundboards. The situation was different for Josè Ramirez III when he would famously take on cedar a decade later – he was able to get the amount he needed to face the demand. After Segovia had started playing his guitars, plenty of orders came from all over the world. Also, Gallinotti’s output was limited, as he mostly worked alone (sometimes assisted by his son), but Ramirez had a team of well-trained officiales. Despite the great success of Gallinotti’s 1952 guitar with cedar top, it’s also possible that he built few of these, as he was not satisfied with the resulting sound, but this is entirely speculative.

Gallinotti’s experimental ideas weren’t limited only to the use of cedar for his tops, but also to another aspect that preceded Ramirez – the long scale. A guitar from 1953, inspired by the work of Julian Gomez Ramirez (with slightly smaller proportions and dimensions of the box), boasts a 670 mm scale length. I have recently restored this guitar (it belonged to the guitarist Domenico Amerio from Turin and now belongs to M° Guido Margaria). Another interesting Gallinotti guitar built in 1958 has cedar fan braces (the instrument today belongs to M° Marco Silletti, teacher at the musical high school in Alessandria).

What my findings as recorded above tell us is that Pietro Gallinotti was a luthier of great brilliance and keen insight. Although he largely built in the established, traditional Spanish style of the day, his experimental intuitions with string length and use of cedar for soundboards pre-dated the large scale acceptance that these innovations would enjoy in the following decades in the hands of other luthiers and workshops.