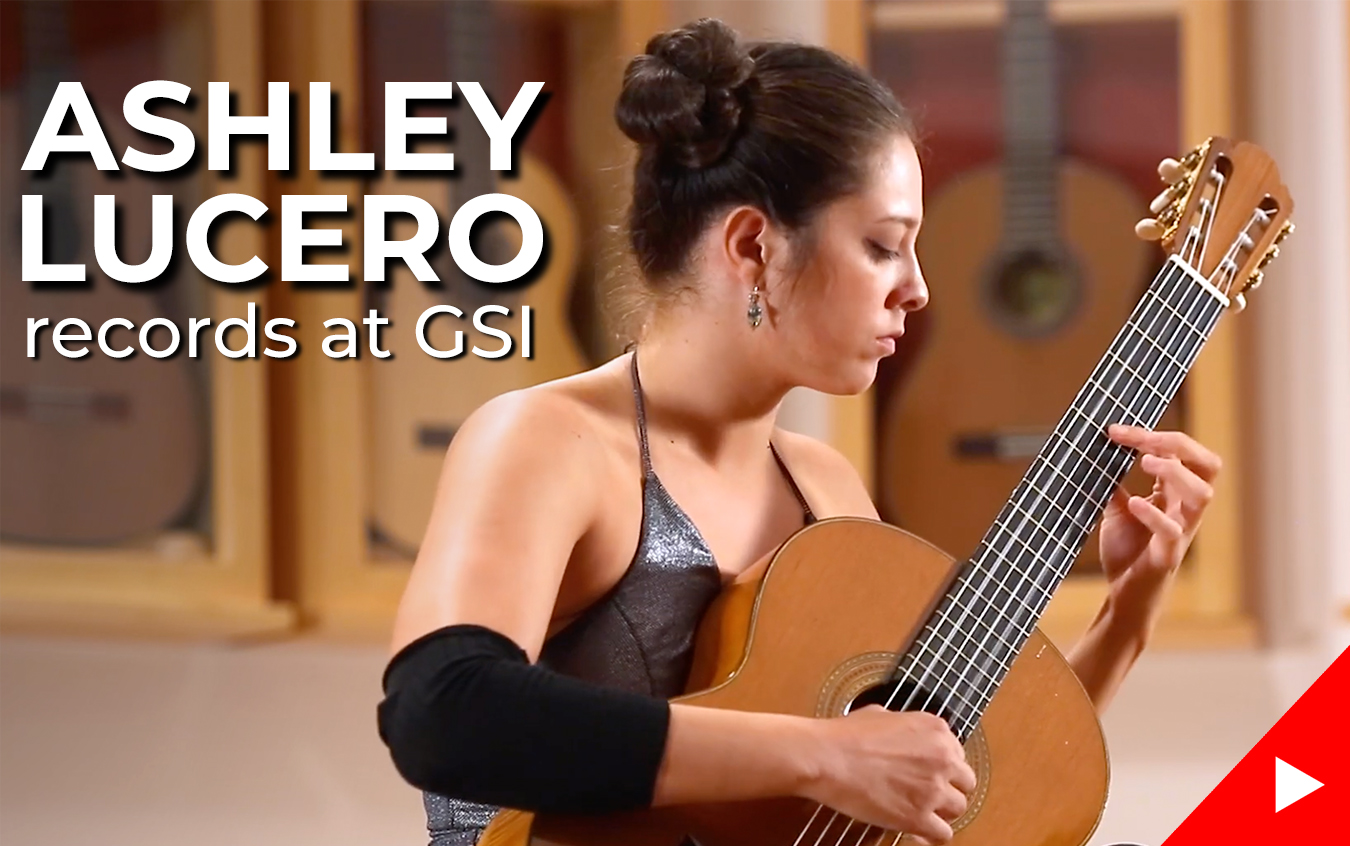 We recently had a new guest artist recording in our showroom. Ashley Lucero is an American guitarist-composer and pedagogue from Cleveland, Ohio with an interesting story of hope and perseverance.

Ashley’s journey as a guitarist began at the age of 17 when she nonchalantly signed up for a high school guitar class after moving away from her hometown to El Paso, Texas. She still remembers how upset she was from leaving her friends and school behind, and how the advising appointment could have gone much differently. She had no idea that her life had just taken a turn for the better, and that her future held incredible experiences and hard work in store. The weekend after her first class she found herself finding any moment to practice just so she could hold, hear, and feel the guitar. It was calming, but interesting and complex. Soon, it was not just the sound and the feel of the instrument, but also the music and the people.

“Guitarists are some of the funniest and smartest people I’ve ever met, not to toot my own horn.”  – Ashley Lucero

After taking a year off after graduation to prepare for auditions, and successfully being accepted to multiple universities on scholarship, Ashley moved across the state to attend the University of Texas at San Antonio. A successful decade-long career in Texas was preempted by hardship, unfortunately, as Ashley developed bilateral arm pain immediately after arriving and could not play for two years into her undergraduate studies. It was devastating emotionally and, sadly, wouldn’t be the last time she’d deal with injuries both musical and non-musical related. Her teacher and mentor, the award-winning composer, Matthew Dunne, encouraged her to focus on writing music for the guitar and to stay patient and curious throughout her healing process. She attributes her success in getting through such challenging times both to his encouragement and to her “iron will.” 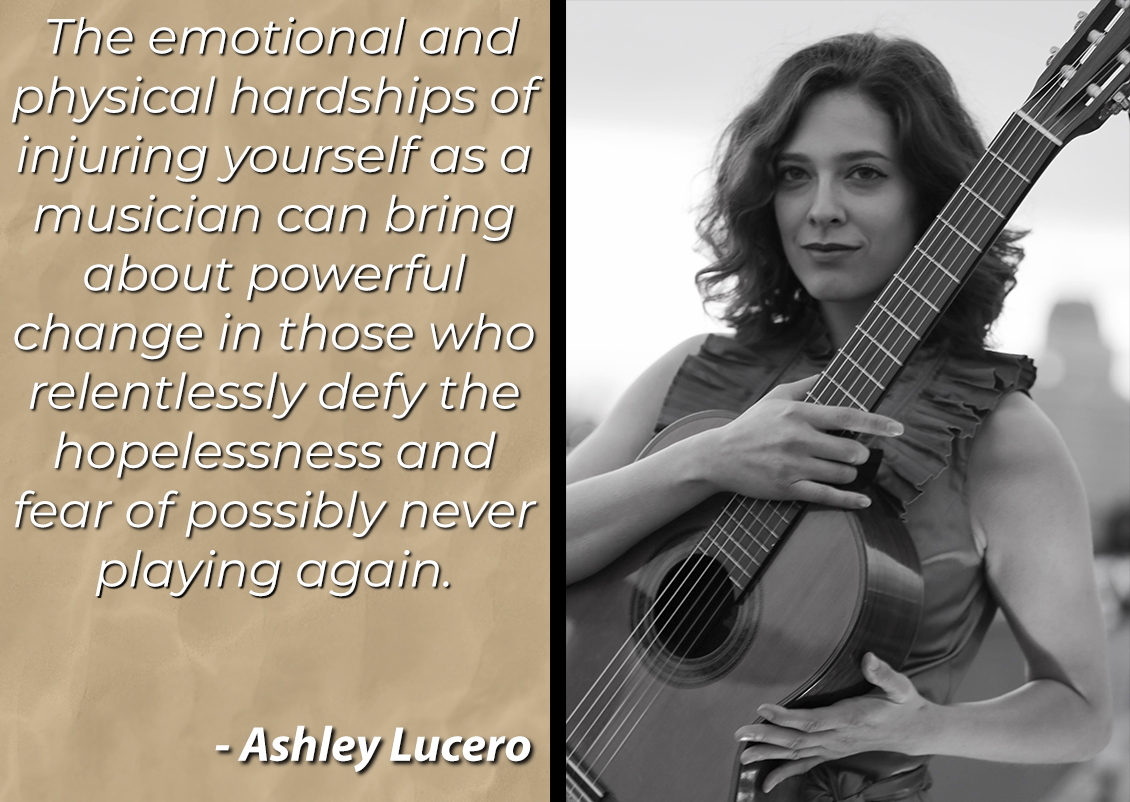 A second time in 2017 she developed nerve irritation in her left arm which left her unable to use her fourth finger. Again, she looked elsewhere to develop her musicianship and began studying conducting and leading the UTSA guitar ensembles. She associates her past injuries with subsequent benefits of being forced to put the guitar away for an extended period of time. Development with technique, emotional connection, perspective, interest, etc. can be renewed through the painful time away from one of the most important parts of ourselves.

Ashley is currently pursuing her doctorate degree at the University of Southern California as the 2020 GSI Foundation Scholar. Ashley received this award due to her extensive work as a music educator in the community. Before moving to California, she was the lead instructor for the UTSA String Project guitar classes for three years, providing affordable and high-quality group instruction to grades 1st-8th in a university setting. Her experience as an educator encompasses students of all ages and backgrounds and she hopes to be an encouraging example to those who are generally discouraged or rejected. Ashley says:

“Everybody has a voice that deserves to be expressed. It’s a lot harder when you feel disconnected from the typical ideas of what an artist or musician looks or acts like, or what success looks and lives like. And when the world starts to add on its prejudices and lies it can feel pointless or painful to engage.”

She goes on to describe:

“When I first picked up the guitar, I immediately knew I needed to write for this instrument; but nobody was playing music written by women or even talking about it. You can only imagine the things that went through my head as a teenager to try and answer this puzzle for myself. I don’t think anyone should have to go through that alone; it can be extremely damaging. I still deal with the negative effects that time in my life had on me and so I make sure my students know they can ask me anything and that I am here to help them.”

As an educator, Ashley focuses on providing her students with the means to work well and maintain a healthy balance of standards and curiosity.

Ashley is not just a professional guitarist, but also a painter. She has also tried her hand at acting, playing the lead role in the independent short-film “States of Contention” which will be screened virtually by the Orlando and Denver film festivals later this year.

Ashley is currently pursing her Doctor of Musical Arts degree at the University of Southern California where she studies classical and flamenco guitar performance and composition.

During her visit to GSI, Ashley has recorded five pieces on five different guitars. Her videos turned out to be very popular among our YouTube audience! She recorded: Baden Powell’s “O Astronauta” on a 1971 Ignacio Fleta e hijos CD/CY, Lennon/McCartney’s “Yesterday” (arr. Takemitsu) on a 2020 Jose Ramirez 1a, Astor Piazzolla’s “Verano Porteño” on a 2020 German Vazquez Rubio “Divina”, Matthew Dunne’s “Miniature 10” on a 2020 Fructuoso Zalapa “Romanillos”and “Miniature 12″ on a 2020 Jose Ramirez “Mangore”.