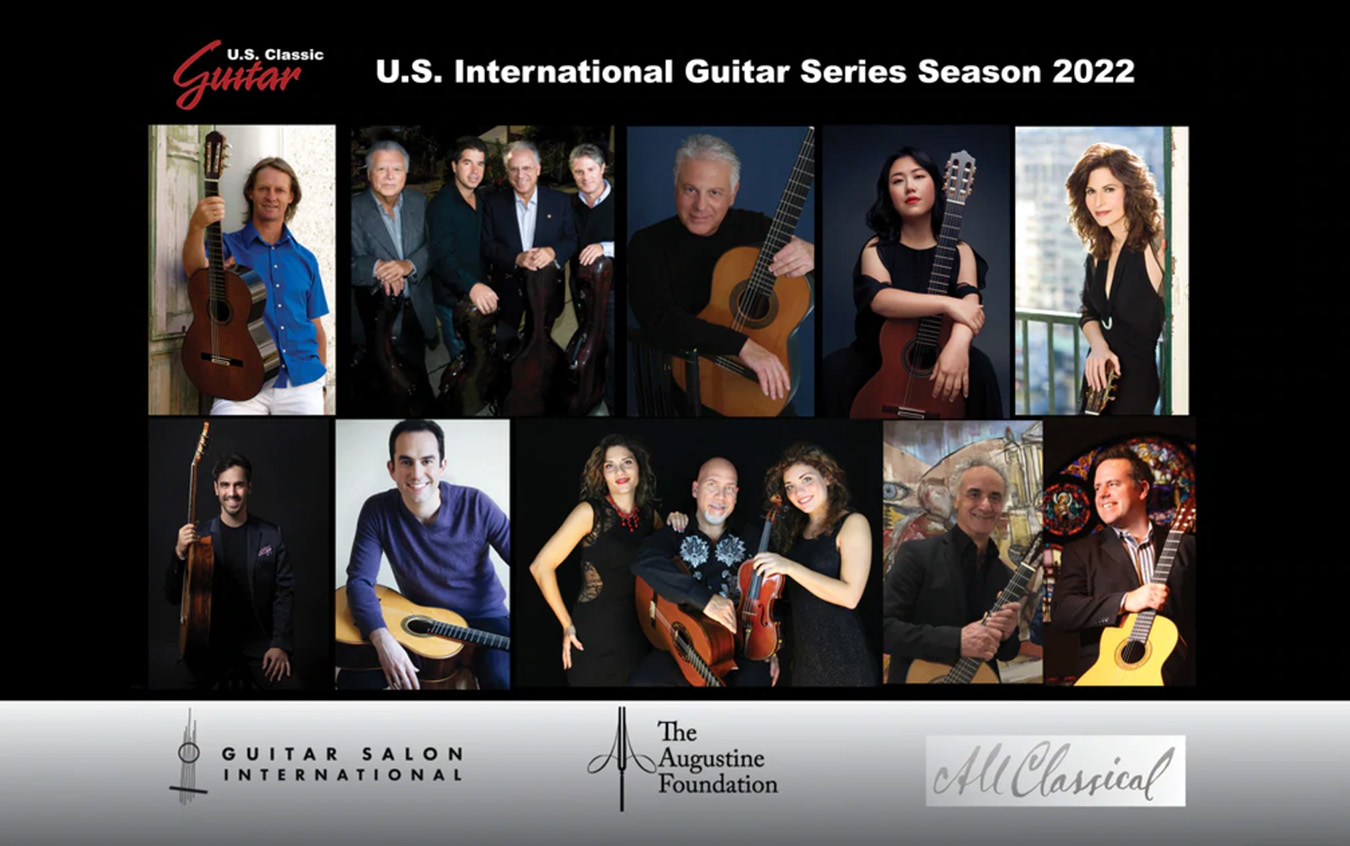 U.S. Classic Guitar is thrilled to announce the U.S. International Guitar Series Season 2022 line-up and the return to live concerts in the areas of Portland, Los Angeles, and Hawaii. The concerts and master classes will also be streamed live for a pay-per-view audience that wishes to watch the events virtually. This season will include some of the greatest guitarists in the world including the Romero Quartet, Grammy-winners Sharon Isbin and David Russell, Angel Romero, Bokyung Byun, 2022 Grammy nominee Mak Grgic and rising star Adam Levin. The series will close with a special benefit concert featuring world-renowned artists Roberto Fabbri and Daughters, Michele Libraro and U.S. Classic Guitar President William Jenks.

U.S. International Guitar Series are sponsored by the Augustine Foundation , Guitar Salon International, The Kahilu Theatre foundation, and various other individuals, foundations, and businesses. U.S. Classic Guitar is a nonprofit 501(c)(3) organization, and they rely on your support. As they approach then end of 2021, please consider making a tax-deductible donation, become a sponsor, or join their team of distinguished volunteers. 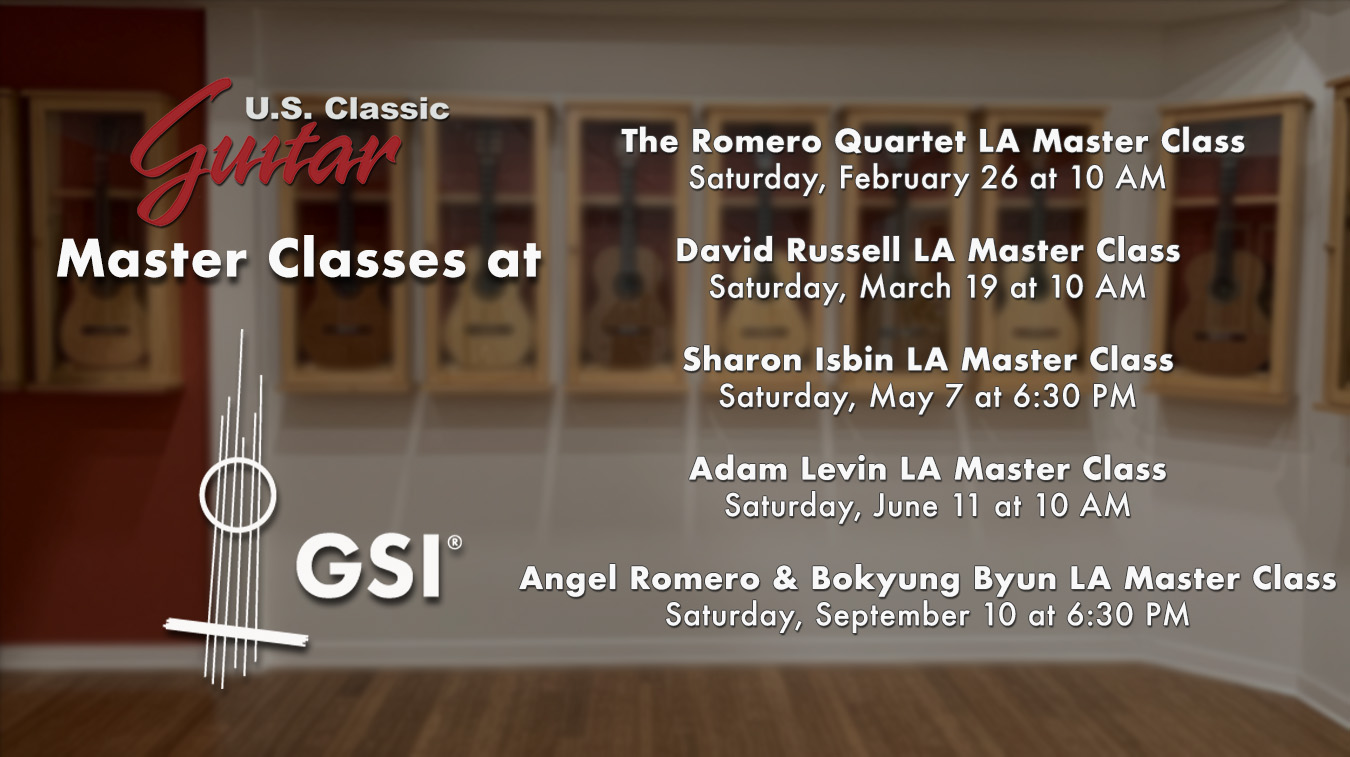 * The Romero Quartet Hawaii Concert – Wednesday, February 23 at 7 PM at the Kahilu Theatre

Sharon Isbin Portland Concert – Friday, May 6 at 7 PM at the First Congregational United Church of Christ

*Sharon Isbin Hawaii concert – Tuesday, May 10 at the Kahilu Theatre

Adam Levin Hawaii Concert – Sunday, June 5 at 4 PM at the Cliffs at BellaVista

Hawaii Concert – Sunday, August 21 at 4 PM at the Cliffs of BellaVista

*Angel Romero & Bokyung Byun Hawaii Concert – Sunday, September 4 at 7 PM at Cliffs of BellaVista - Private residence and Address will be shown on Ticket

* These concerts will be streamed live online and are available for purchase to watch in your home.

The concert and master class venues this season will include the gorgeous historic First Congregational Church of Los Angeles, the First Congregational United Church of Christ, the Trinity Episcopal Cathedral in Portland, the Kahilu Theatre in Hawaii, and a beautiful private venue on the Big Island of Hawaii called the Cliffs at BellaVista. All master classes in LA will be held in at Guitar Salon International in our showroom.

For your safety, you will need to either show proof of vaccination, show a negative COVID-19 test result taken within three days prior to the event, or show a positive test result for documentation of recovery from COVID-19 from no later than 90 days and no earlier than 10 days prior to the event. Season ticket holders who are fully vaccinated will only need to show proof of vaccination at the first event they attend. Proper masks are also required within the venues except while actively eating or drinking or if you have a medical condition that does not allow it. 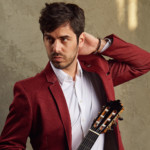 This exciting season will kick off in late January with LA based guitarist Mak Grgic who has just been nominated for a 2022 Grammy-award for best solo instrumental classical album for his new recording Mak | Bach. He has quickly established himself as one of the top up-and-coming concert artists of the world and programs music as far reaching as works from the avant-garde, film music, the great classics of guitar repertoire, and much more. He has performed as a soloist worldwide in many prestigious concert halls such as the Musikverein and the Konzerhaus in Vienna. He also has performed with various orchestras and collaborates with many world-renowned musicians such as the Assad Brothers and the Principal Concertmaster of the LA Philharmonic Martin Chalifour. Touted as a “gifted young guitarist” by the New York Times, and “a guitarist to keep an eye on” by the Washington Post, Mak Grgic [GER-gich] is a star on the worldwide stage. This special performance will feature an all Bach program where he will perform his new Grammy nominated album on a unique well tempered guitar.

Next, in February will be the legendary Romero Quartet performing their 60-year anniversary tour featuring Celin, Pepe, Celino, and Lito Romero. Known to millions as “The Royal Family of the Guitar,” the Romeros have performed in major performance venues of the world, such as Carnegie Hall. They were also asked to perform at the White House and in 1983 they appeared at the Vatican for the Pope John Paul II. King Juan Carlos knighted Celin, Pepe, and Angel into the Isabel la Catolica. Since the Romero family came to the United States in 1957, they have consistently dazzled audiences everywhere and have inspired enthusiastic praise from critics coast to coast. The Romeros have given thousands of concerts all over the world; today, they continue to produce music which is extraordinary. Whether performing as a quartet, duo, as soloists, or in recital and with symphony orchestra, the Romeros prevail as champions in the realm of classical guitar.

David Russell dazzled U.S. Classic Guitar’s online audience this last March of 2021 with an incredible performance from his home in Spain and now he will be returning to perform for them live this March in 2022 with a completely different program. He received a Grammy-award for his CD called Air Latino, he holds an honorary doctorate from the University of Arizona, and he was inducted into the Hall of Fame of the Guitar Foundation of America. He is a very prolific recording artist and his discography includes seventeen CDs with Telarc International. The New York Times wrote about his performance: “… Mr. Russell made his mastery evident without ever deviating from an approach that places musical values above mere display. It was apparent to the audience throughout the recital that Mr. Russell possesses a talent of extraordinary dimension”.

Angel Romero is a member of the Romero family but left the quartet to focus on his solo career and conducting. Hailed for his superior artistry as a master of the Spanish guitar, Angel Romero’s eminence in the music world as a soloist and a conductor is heralded by audiences and critics alike. One of the most sought-after musicians of his generation, Angel Romero has appeared with the world’s major orchestras, including the LA Philharmonic, the New York Philharmonic, the Cleveland Orchestra, the Royal Philharmonic, the New World Symphony, and the Royal Concertgebouw Orchestra. For these exiting concerts in September, he will be joined by another soloist, Korean guitarist, Bokyung Byun who is the recent winner of the 1st prize at the GFA International Concert Artist Competition. Bokyun Byun has been praised by Classical Guitar Magazine as "Confident and quite extraordinary". 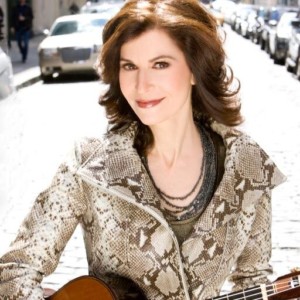 Performing in May will be Sharon Isbin who is acclaimed for her extraordinary lyricism, technique, and versatility. She is a multiple Grammy-award winner and she was named the 2020 Musical America Worldwide Instrumentalist of the Year and the first guitarist ever to receive the coveted honor in its 59 – year award history. Hailed as “the pre-eminent guitarist of our time,” she is the winner of Guitar Player magazine’s Best Classical Guitarist award, Germany’s Echo Klassik, Concert Artists Guild’s Virtuoso Award, and the Toronto and Madrid Queen Sofia competitions, and was the first guitarist ever to win the Munich ARD Competition. She has performed with the major orchestras and important venues of the world and her catalogue of over 30 albums from Baroque, Spanish/Latin and 20th Century to crossover and jazz-fusion, has sold nearly a million copies and reflects her remarkable versatility. She is also the director of guitar departments at the Aspen Music Festival and The Juilliard School (which she created in l989 becoming the first and only guitar instructor in the institution’s 100-year history). 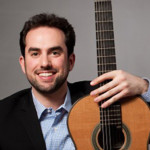 Praised for his “visceral and imaginative performances” by the Washington Post, top prize-winning classical guitarist and recording artist Adam Levin will be performing for us in June. Levin has performed extensively across the United States at renowned venues such as Chicago’s Pick Staiger, Nichols, and Mayne Stage concert halls as well as at the prestigious Art Institute of Chicago; Boston’s Isabella Stewart Gardner Museum, the Museum of Fine Arts, and Jordan Hall; Spivey Hall in Atlanta; repeat appearances at Le Poisson Rouge in New York City; and the Kennedy Center in Washington, DC. In Europe, Levin has performed in some of the finest venues across Spain, Italy, Germany, and Switzerland.

The series will close in August featuring Italian guitarist Roberto Fabbri performing with his two daughters vocalist Francesca Fabbri and violinist Valeria Fabbri; Italian guitarist Michele Libraro; and U.S. Classic Guitar President William Jenks. In 2007, Soundboard magazine stated that, “Roberto Fabbri is flamboyant and technically astonishing – a definite crowd pleaser.”  He currently records for Sony classical where he often composes and performs his own music. Michele Libraro is the recipient of “The Golden guitar Prize” at the 7th International Guitar Meeting in Alessandria, Italy in September of 2002 and he is the winner of various National competitions such as those of Genova, Pescara, Taranto, Locorotondo, Napoli and Matera. William Jenks is a rare talent from a new generation of classical guitarists. Not only is he a world class recording artist, sought out for performances and master classes around the globe—he is also the Founder and President of U.S. Classic Guitar. He has performed throughout the United States, South America, and Europe and has taught master classes and served on the jury for several International guitar competitions.

We’d like to encourage you to join this monumental season by becoming a season ticket holder (our best value) or purchasing individual tickets. Also, consider supporting U.S. Classic Guitar which is a nonprofit 501(c)(3) organization at a deeper level by making a tax-deductible donation or joining their group of distinguished volunteers.