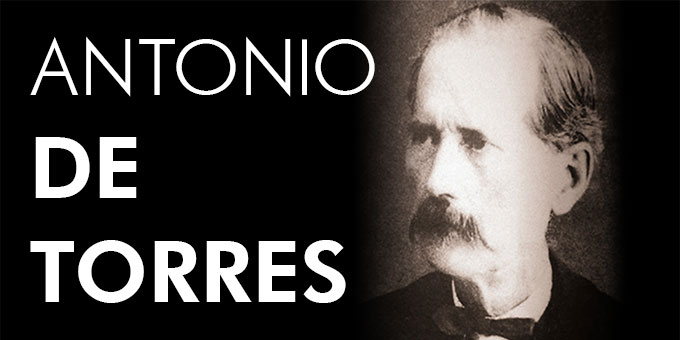 In the history of the classical guitar, no single individual is more important than Antonio de Torres Jurado (1817-1892), known as Torres, a guitar maker who achieved some local renown in his life but was never free from poverty.

It is possible that the innovations we associate with Torres were inevitable: that the guitar could have evolved towards a form as harmonious as that which Torres created without the intervention of any individual. But by his intelligence and craftsmanship, Torres accelerated the process, choosing the best options from those available. 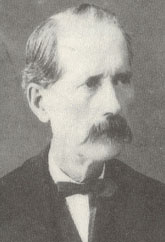 Torres’ judgement restored the guitar’s viability at a time when it was manifestly failing to compete with louder, more dramatic instruments. By 1869, when he sold a guitar to Francisco Tárrega, the guitar had been swept out of the drawing room by the piano and had barely established a toehold in the concert hall. In Spain, which had resisted the piano, the guitar was nonetheless associated with peasants, gypsies and those who play for loose change in bars.

Tárrega understood the Romantic inclinations of the time, the need for music to express drama and strong personal emotion, and in the Torres guitar he had an instrument with the range of dynamics and tone color to fulfill that role. The delicate, polite tones of earlier concert guitars – and the brash strumming of Spanish popular guitars – had now been supplanted by a true musical instrument capable of accommodating most styles and expressing most emotions.

A man who comes from nowhere, changes the world, and then dies in abject poverty is likely to attract a great deal of mythology. Anyone interested in the history of the guitar owes a huge debt to José Luis Romanillos for his biography Antonio de Torres, Guitar Maker His Life and Work. Romanillos’s scholarship has established many of the facts about the life of Torres, although as a character he remains as elusive as ever.

Antonio de Torres Jurado was the son of a tax collector, born in the village of La Canada, near Almeria, in the far south of Spain in June 1817. At 12, he was apprenticed as a carpenter. The family moved to Vera, a larger village slightly to the north, and it was there that he completed his apprenticeship and was enrolled in the local guild of carpenters. In 1833 dynastic war broke out in Spain, and within a year the young Antonio was called up for military service. Twice his father attempted to have him exempted on medical grounds, claiming he suffered from habitual stomach-aches, and twice the attempt was rejected. Eventually, though, the string-pulling paid off and he was released as unfit for military service. This time he was said to be suffering from a chest complaint. To preclude any official change of mind, Antonio was propelled into a hasty marriage: only single men and widowers without dependents were considered for conscription. In February 1835 he married Juana Maria Lopez, thirteen-year-old daughter of a local shopkeeper. The young couple were soon in difficulties. They had a child, a daughter, in May 1836 and found themselves overwhelmed by expenses, including special taxes imposed to help pay for the war Torres had avoided. They fell into debt and had property impounded, including, for a while, Torres’ saw. This could have been a catastrophe for a carpenter, but he was able to recover it by offering the authorities a piece of furniture, which was duly auctioned. A second daughter was born in 1839, and he was faced with the loss of more property, including a set of 10 pine boards. But then he found a new line of work, trading in shares in the newly-opened local silver mines. He even found enough spare capital to make a modest investment himself. 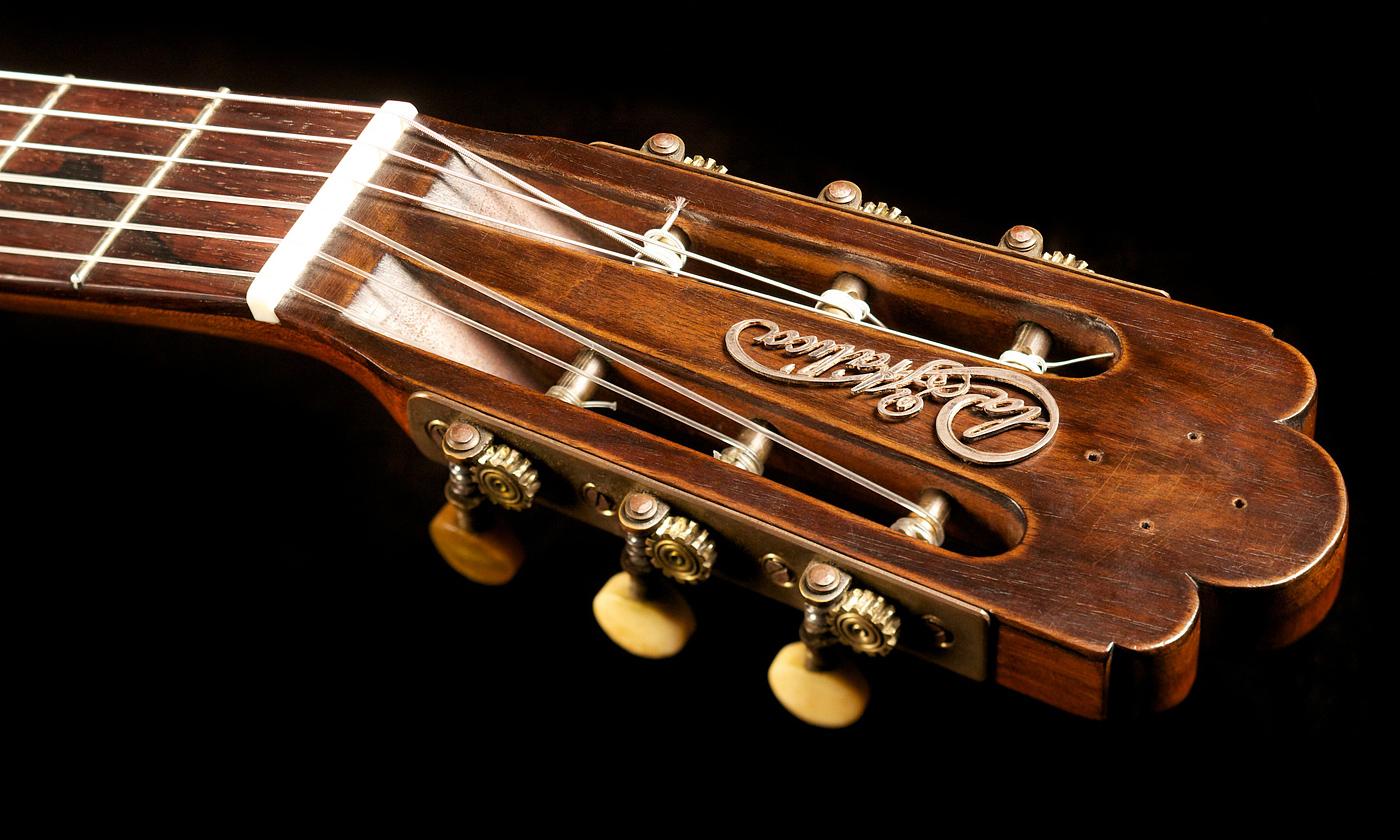 But if he had found some financial stability, his family life was in turmoil. A third daughter was born in 1842, dying a few months later. The second girl had already died by this stage, and in 1845 his wife succumbed to tuberculosis at the age of 23. Leaving his first daughter with his in-laws, he moved to Seville in search of work.

At some point between about 1836 and 1842, Torres seems to have spent some time in Granada learning to make guitars, possibly with the local maker José Pernas, who is often described as his teacher. He seems to have been a musician. Juan Martinez Sirvent, a priest who knew Torres in old age, described him in a letter quoted by Romanillos as “a fine musician and composer whose compositions he revealed to us with his Citara, his favourite instrument which he had also made himself.” The citara is a pear-shaped flat-backed guitar: one made by Torres still exists.

He may have made a few instruments while he was still living in Vera. but he only took up the craft professionally in the 1850s on the advice of Julian Arcas (1832-1882), a young player of note and the first of his famous clients. In his various workshops in Seville he produced a series of excellent guitars, including ‘La Leona’, built in 1856, and others later used by Tárrega and Llobet. In 1858 he won a bronze medal in the Seville Exhibition for an extraordinarily decorated instrument in bird’s eye maple, and his status as the leading guitar maker was assured.

At this time he awarded himself title ‘Don’, common among guitar makers and other craftsmen as well as members of the local middle classes: priest, merchants and civil servants. In 1868, he married again, after living with his new wife-to-be, Josefa Martin Rosada, for several years. Arcas was their best man.

The next year Tárrega arrived in Seville with his patron Canesa Mendayas, a wealthy merchant. They had travelled from Barcelona in search of an instrument similar to that played by Arcas, sometimes said to be ‘La Leona’. Tárrega was then only 17. According to the account of Emilio Pujol, biographer of Tárrega, Torres offered the boy a modest instrument at first, then heard him play and brought out an instrument he had made for his own use several years earlier. Tárrega played it constantly for 20 years, until its top caved in: it was subsequently repaired by Enrique Garcia. Tárrega was a tremendously influential player with a powerful clique of followers. But his support did little for Torres’ financial confidence. In about 1870, he abandoned guitar making, returned to Almeria and opened a china shop. Arcas gave up playing the guitar professionally at the same time.

In neither case was the retirement permanent. Arcas returned to performing in 1876, by which time Torres was a year into what his labels call his “second epoch”. This time, however, guitar making was a part-time activity. There was the china shop to tend: and the family had even begun to take in lodgers. After the death of his second wife, in 1883, he doubled his productivity, turning out about 12 guitars a year until his death in 1892. These instruments, though, were more basic instruments for local players rather than the great virtuosi he had previously supplied. 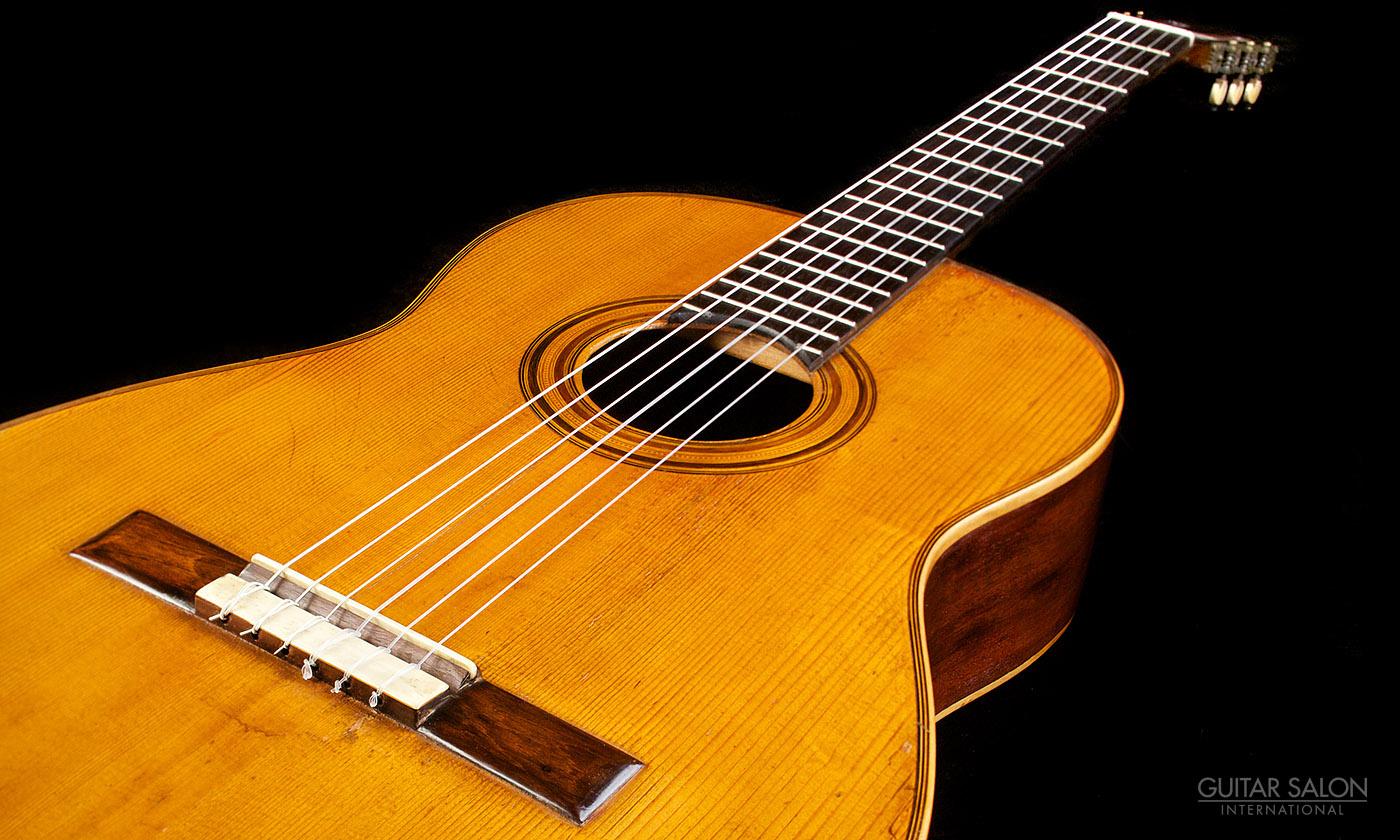 By this time his hands were shaking so much that he had to ask a young friend, the local priest Juan Martinez Sirvent, to help him with the more intricate work. He had no choice but to work, with two daughters to support (one only 16 and unmarried) and significant borrowings. He died in November 1892 of “acute intestinal catarrh”. Although he had acquired three houses in the latter part of his life, the proceeds from their sale did not even cover his debts. He did, however, receive a generous obituary in the local newspaper.

Numerous innovations have been attributed to Torres over the years, from fan-strutting to the use of mechanical machine heads, but Torres’ real genius was to find the most important developments of the day, improve them and bring them together. In doing so he created an instrument of a ‘rightness’ that has never been seriously questioned.

The most fundamental thing Torres did was to increase the size of the body. Torres’ concert guitars, introduced in the early 1850s, have soundboards about 20 per cent larger than those of the concert guitars played by Fernando Sor and Dionisio Aguado a few years earlier. The extra area is in both upper and lower bouts, giving his plantilla the figure-of-eight form we now take for granted. Some claim Torres arrived at this shape geometrically. His descendants, according to Romanillos, claim it was based on the figure of a young woman he saw in Seville. Torres’ bridges were another step forward: from about 1857, he used a separate saddle, permitting minute adjustment of string height.

Torres knew that lightness was essential in the vibrating surface of an instrument. But a large soundboard, though potentially louder, is heavier than a small one. Making it thinner to reduce its weight would make it weak and flexible, with unfortunate effects on the sound. The solution lay in building in building a soundboard that was ‘domed’, arched in both directions, over an arrangement of wooden struts.These famous fan-struts would ensure the static strength of the tapa, the soundboard, while letting it respond to the vibrations of the strings. 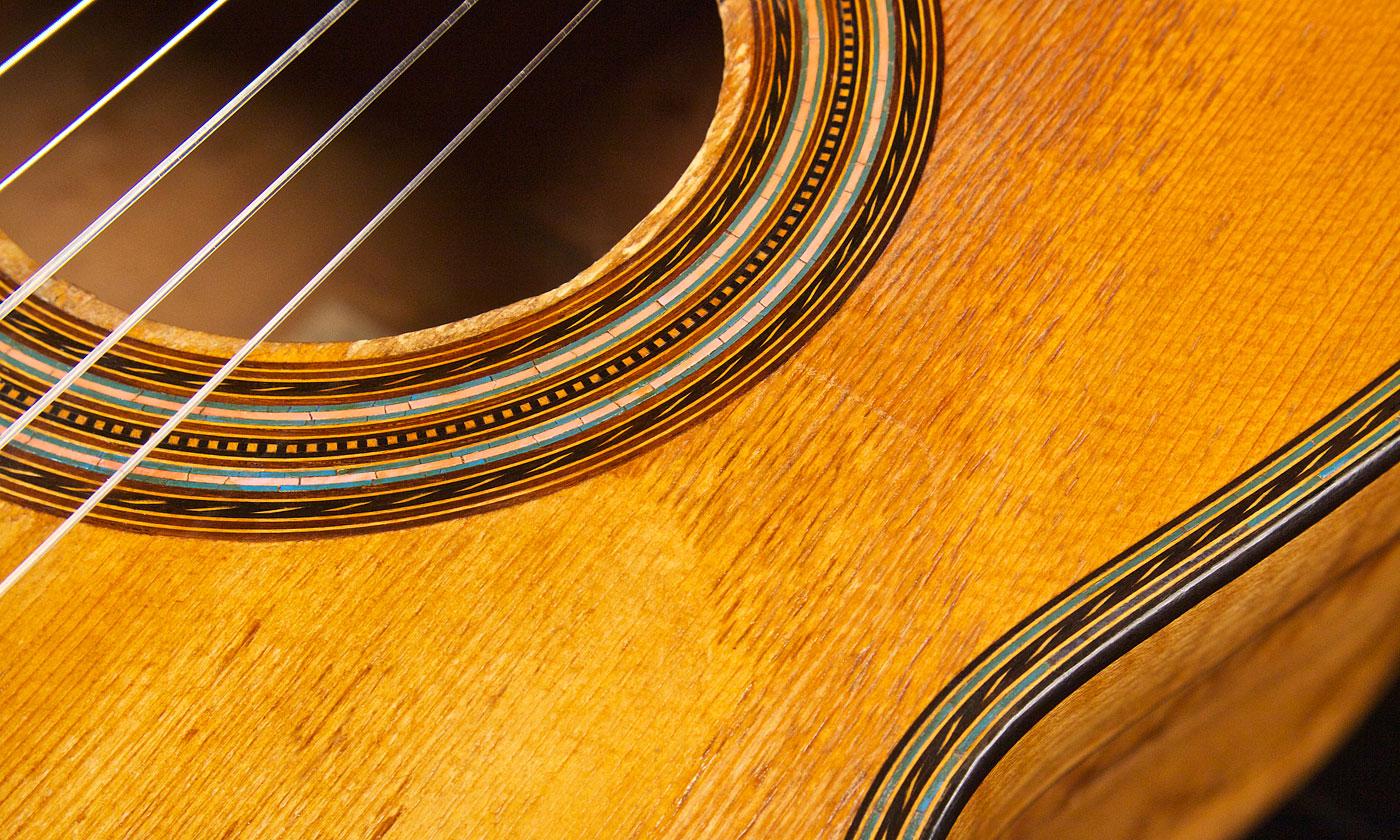 The system’s efficacy was proved by Torres’ experimental guitar, built in 1862, with papier-maché sides and back. This is no longer playable, but those who heard it accepted its maker’s contention – confirmed by modern physicists – that only the top of a guitar is of real importance in determining the character of its sound. A very close sister to this experimental Torres guitar, made also in 1862, passed through GSI’s showroom recently – a spruce top and maple back and sides instrument with papier-maché rosette and veneer lines of the top purfling.

Machine heads were not new when Torres used them, in 1856, but they were not common in the Spanish tradition. A more important choice, however, was an aesthetic one. Torres insisted that guitars intended for serious music should have only subtle decoration. Previously the guitar had been both a musical instrument and an item of furniture. Even the vibrating soundboards of 18th and early 19th century guitars were loaded with inlays and marquetry work. With the exception of the elaborately inlaid instrument with which he won his bronze medal in 1858, most of the guitars built by Torres were austere in decoration: it was certainly kept away from the functional parts of the instrument.

Torres does not seem actually to have invented much, except possibly the tornavoz. This was a steel cylinder of the same diameter as the soundhole and extending it back into the body, intended to give the guitar added projection. Certainly, ‘La Leona’ is the earliest surviving guitar by any maker to use the device. He used it often during his first period of guitar making, then abandoned it. His followers took it up, but by the end of World War II it was forgotten.

The effects of Torres’ work were immediate and obvious. The new posture recommended by Tárrega, with the left leg raised to support the guitar, depended upon the broader Torres instrument. It gave players the stability they had craved since the days of Dionisio Aguado’s tripod, and facilitated more complex music at higher positions. The louder, fuller sound of the Torres guitar permitted a wider range of dynamics and musical expression. Small wonder that the Torres guitar was almost seen as a new instrument. Tárrega wrote no method, but his teachings were faithfully handed on to the next century by his pupil Emilio Pujol (1886-1980). In his introduction to Pujol’s Escuela Razonada de la Guitarra (Rational Method for the Guitar) the composer Manuel de Falla wrote: “It is a marvellous instrument, as austere as it is rich in sound, and which now powerfully, now gently, takes possession of the soul. It concentrates within itself the essential values of many noble instruments of the past, and has acquired these values as a great inheritance without losing those native qualities which it owes, through its origin, to the people themselves.” It is difficult to imagine anyone writing these words if it had not been for Torres.