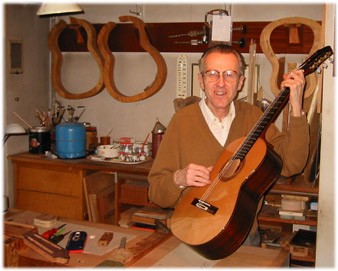 Daniel Friederich was influenced by the legendary French luthier Robert Bouchet and has established himself as one of the most respected and influential luthiers in the world. In 1960, he became a full-time maker in his Paris workshop. Over the years, his technical experiments, combined with his experience and acute construction methods, have led to a precise and well-balanced instrument, possessing great power and richness. 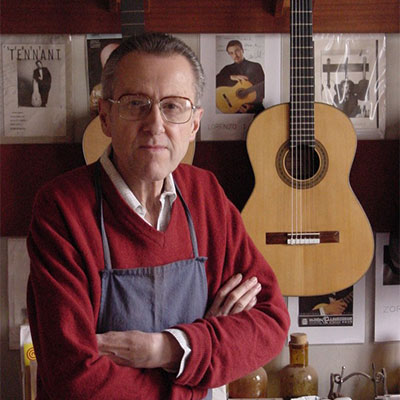 In his own words:

“I was born on January 16, 1932 in Paris. I built my first classical guitar in 1955 because I was learning to play the guitar and my teacher, Cristian Aubin, said that I needed a better instrument. I realized that I could not possibly afford to buy a good guitar so I decided to make one for myself. It was a very simple copy of a guitar by Francisco Simplicio.

Aubin helped me; he had already made a copy of his own Torres, and had spoken to Robert Bouchet about the construction method. I completed fifteen guitars before I showed one to Bouchet in 1960. In 1967, I anonymously entered a competition in which the jury included both Fleta and Bouchet. I was awarded a silver medal for the sound of my guitar and a gold one for the craftsmanship.

My earlier guitars were relatively simple, pleasant to play, and the sound was quite explosive. Since about 1973, I have increased the weight and the guitars have more sustain, and a richer, sweeter sound, but they are still easy to play. (On the whole, modern guitars seem more difficult to play than those made thirty to fifty years ago, although they do give more vigor, contrast, color, sustain, and have more timbral and dynamic possibilities).

1) The ‘Concert’ model, with a serial number on the label. This was the most expensive and advanced, with carved head, specially designed machine-head, high quality wood, and purfling.

2) The ‘Recital’ and ‘Arpege’ models, less expensive with no serial number on the label, with more standard (or experimental) fan strutting and machine head, good quality wood. The ‘Arpege’ model has no inlay work on the bridge, the purfling are less elaborate but the general design of these models is the same. 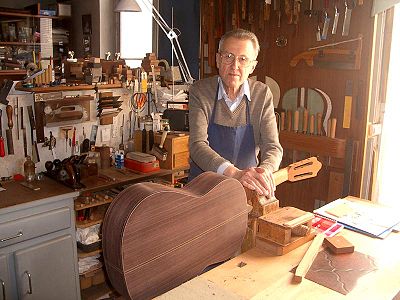 Since 1970, I have been making only ‘Concert’ guitars with a serial number and year of making on the label.

When a guitar is finished, my ear quickly tells me if the result is successful. The guitar works as a complete harmonic unit and all its elements must be combined, like in a painting. There are no great secrets, but there are a hundred components and a hundred parameters to master, to respect and to control. It will still be art for a long time, in spite of laboratory experiments.

It takes me more than two hundred hours to build one guitar. To make a career as a luthier, one must be fired by a total and enduring passion for it. One needs to study the various aspects of acoustics and musical theory. Above all, one must educate the inner ear and develop an acute ability to listen, as each note of the guitar is a great chord with the superimposed harmonics forming each sound.” 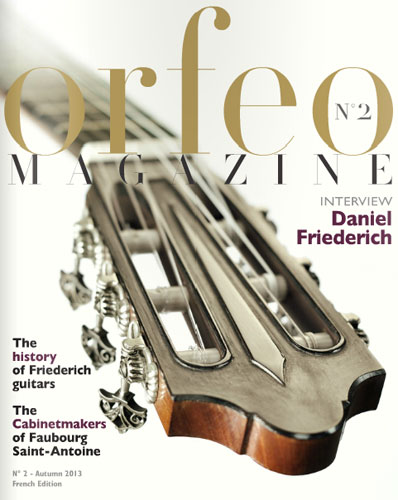 Daniel Friederich has just been featured in the latest issue of the French classical guitar magazine Orfeo, and it is truly a beautiful homage to this great luthier. In addition to some beautiful photos the issue includes a copy of Friederich’s early catalog, a discussion of his many experiments and the detailed logs he has kept of each guitar he has built, as well as an article on the cabinetmakers of Faubourg Saint-Antoine (where Friederich got his start as a woodworker) and much more. Click here to see the full issue of Orfeo.