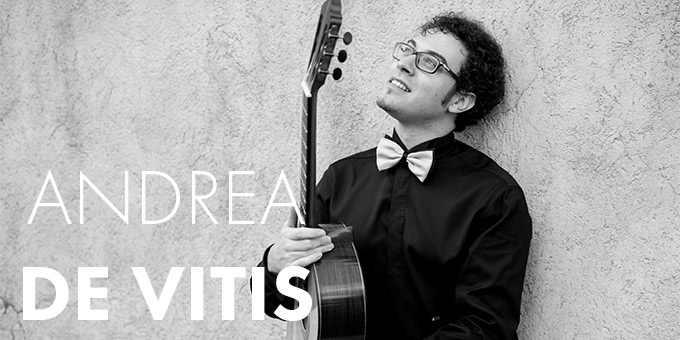 Andrea De Vitis (Rome, 1985) graduated with full marks from the Morlacchi Conservatory in Perugia, Italy, where he studied under Leonardo De Angelis. He continued his studies at the Segovia Guitar Academy in Pordenone, Italy with Paolo Pegoraro and Adriano Del Sal. There, he attended masterclasses with Oscar Ghiglia, Carlo Marchione, Arturo Tallini, Pavel Steidl, Frédéric Zigante, Carles Trepat and Piero Bonaguri among others.

As a recognition of his artistic merit, in 2013 he received the Golden Guitar Award for the best up-and-coming guitarist of the year at the 18th International Guitar Convention Pittaluga held in Alessandria.

Andrea De Vitis has performed in prestigious concert halls all over the world, including in the US, Russia, Spain, Austria, Germany, Belgium, Netherlands, Poland, Hungary, Czech Republic and Slovakia, and his recitals have been highly acclaimed by audience and press. He regularly plays with orchestras such as the Aukso Kameralna (Poland), Anima Musicae (Hungary), Orchestra classica di Alessandria (Italy) and Capella State Orchestra (Russia).

His debut album “Colloquio with Andrés Segovia”, released by DotGuitar web label in March 2015, gained a great success with both critics and audience, and it received the Golden Guitar Award for the Best CD of the Year at the 22th International Guitar Convention Pittaluga.

Andrea De Vitis plays a guitar made by Walter Verreydt and he is a D’Addario Artist.