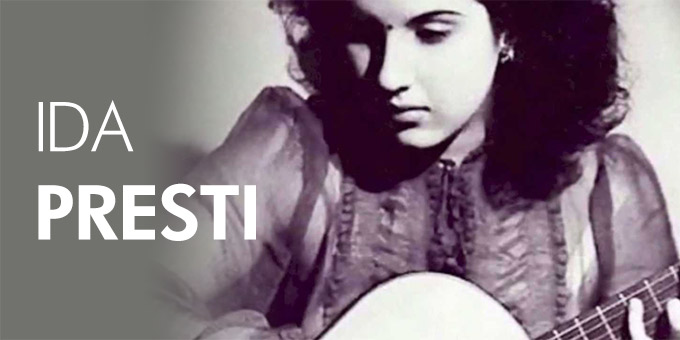 Presti was born Yvette Montagnon in Suresnes, a suburb of Paris, France, to a French father and Sicilian mother. Her father, Claude Montagnon, was her first guitar teacher, and he thought that ‘Ida Presti’ sounded better than ‘Yvette Montagnon’ (Presti came from her mother’s name, Olga-Gracia Lo Presti). She also studied harmony and music theory with guitarist and luthier Mario Maccaferri. Presti played in public for the first time when she was eight, and gave her first full-length concert at the age of ten, on April 28, 1935 at the Salle Pleyel in Paris. Lauded for her prodigious talent by her teachers and contemporaries, she recorded for the French arm of the HMV record label in 1937. While still under twelve, she played at the Pasdeloup concerts and the Société des Concerts du Conservatoire for two consecutive years.

At age 14, she appeared in the 1938 film La Petite Chose as a guitar player in a supporting role and, as a 16-year-old, she played Paganini’s guitar during a commemoration of the centennial of his death in 1940. 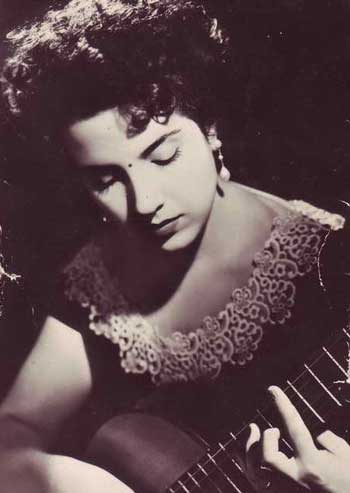 On September 16, 1948, Presti gave the French premiere of Rodrigo’s Concierto de Aranjuez, which was broadcast on radio from Paris and also carried on several other continental stations. She gave her first recital in London on 1 December 1951, The Times noting “her truly astonishing right hand dexterity and her lively temperament.” After a recital the following year, The Times commented, “When Miss Ida Presti, a young French guitarist, made her English début last autumn it was her prestidigitation that lingered in the memory. Her reappearance early in the week at Wigmore Hall confirmed this first impression of brilliance but also gave further evidence of sterling musicianship.”

After her second marriage, to the guitarist Alexandre Lagoya, she stopped performing as a solo artist and formed the Duo Presti-Lagoya with him, concentrating on works for two guitars. The two formed one of the most accomplished classical guitar duos in history, performing over 2,000 concerts. Many composers began to write works for two guitars, dedicated to them, including Mario Castelnuovo-Tedesco (Les Guitares bien tempérées, 24 preludes and fugues in all major and minor keys; Concerto for Two Guitars), and Joaquín Rodrigo (“Tonadilla”).

Rodrigo finished another piece for two guitars, the Concierto Madrigal, in 1966, but Presti died before she and Lagoya could perform it. Angel Romero and Pepe Romero subsequently gave the first performance of it in July 1967.

At the age of 19, Presti married Henry Rigaud (sometimes spelled Rigo) in 1943, and they had a daughter the following year.

She met the classical guitarist Alexandre Lagoya in 1951, and a year later they married.

On 24 April 1967, Presti died at Strong Memorial Hospital in Rochester, New York, at the age of 42 during a concert tour in the United States. Presti had been coughing up blood for several days and was first examined at a hospital in St. Louis. Although advised to remain there, the couple flew to Rochester, New York, where their next concert was scheduled to be held, and Presti was brought to the hospital directly from the airport. Presti died of a massive internal hemorrhage due to a tumor in her lung, while doctors struggled in vain to control the bleeding.