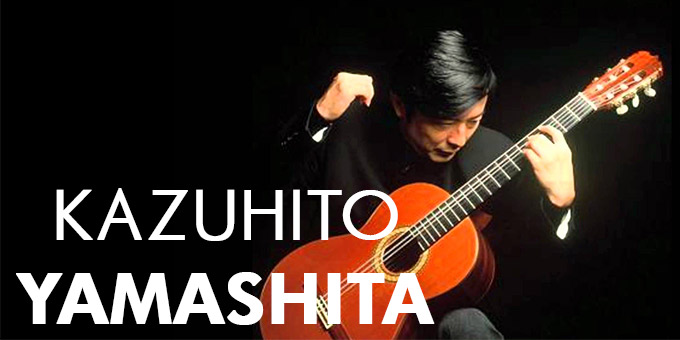 Kazuhito Yamashita is a Japanese classical guitarist who was born in Nagasaki in 1961. His technique and expression are highly regarded among peers and fans. By the age of 32, Yamashita had already released 52 albums, which altogether include repertoires for solo guitar, guitar concertos, chamber music and collaborations with other renowned musicians.

Yamashita began studying the guitar at the age of eight under the guidance of his father Toru Yamashita. In 1972, when he was eleven, he won the Kyushu Guitar Competition. Four years later, he was awarded First Prize in the All Japan Guitar Competition. In 1977, he won three important international competitions – the Ramirez in Spain, the Alessandria in Italy and Paris Radio France Competition, being the youngest winner ever to receive first place there. 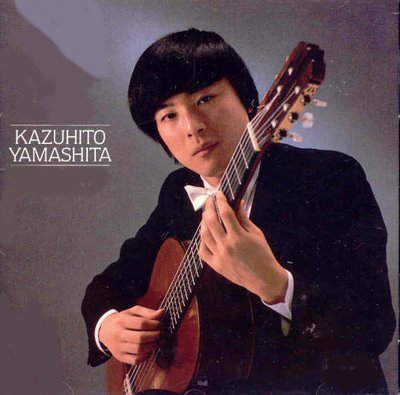 In 1978, Yamashita made his debut in Japan and, in the following year, traveled to Europe. While still in his twenties, he made his first appearances in Canada’s Toronto International Guitar Festival and gave a solo recital at the Musikverein (Grosser Saal) in Vienna, while also performing in the US and UK. He gave solo recitals in concert halls around the world such as the Lincoln Center and has performed with a variety of orchestras and conductors in Europe, North America and Asia. In 1989, the Casals Hall in Tokyo, considered to be one of the finest auditoriums in the world, presented a series called The World of Kazuhito Yamashita, comprising of seven concerts in 12 months. The high point of the concerts was Castelnuovo-Tedesco’s ’24 Caprichos de Goya’ in a single performance. The series concluded with Bach’s six sonatas and partitas over two consecutive nights; a follow-up recital series was given in 1994 and 1999.

Yamashita has made almost 80 recordings and numerous original arrangements of such works as Mussorgski’s ‘Pictures at an Exhibition’, Stravinsky’s ‘Firebird Suite’, Rimsky-Korsakov’s ‘Scherezade’ and Dvořák’s ‘Symphony from the New World’. His early arrangements of ‘Pictures at an Exhibition’, ‘Firebird Suite’ and Dvořák’s ‘New World Symphony No. 9 in E Minor’ broke boundaries in terms of solo guitar expression and virtuosity. He has recorded for BMG (RCA), Crown Classics, Japan Victor, King Records and Alfa Records. His recordings include 16 CDs of the complete works of Fernando Sor, and a collection of 5 CDs comprised of J.S. Bach’s sonatas and partitas for violin, cello, lute and flute (BWV 995-1013), all of which he himself transcribed for the guitar. His recording of Mussorgsky’s ‘Pictures at an Exhibition’, released in 1981, was awarded the Deutsche-Grammophon Award.

Yamashita is an enthusiastic proponent of new works for the guitar and has given the world premier of more than 60 new compositions. In this regard, his world premier and presentation of the works of the Japanese composer Keiko Fujiie is a notable debut. In 1999, he received the National Arts Festival Grand Prize from the Japanese Government’s Agency for Cultural Affairs for his CD recording titled Japanese Guitar Music 1923-1948.

In 2004, Kazuhito Yamashita + bambini was founded by Yamashita, his two daughters and elder son, to look to the risorgimento of a quintessential and older musical tradition. This recalls a bygone era of both the East and the West when such music was known and valued and whose echoes can still be heard in the classic 11th century novel The Tale of Genji. In 2010, his younger son joined them and they were renamed Kazuhito Yamashita Family Guitar Quintet. They have already appeared in festivals in Italy, the Córdoba Festival in Spain in 2007 and 2011, and have also performed in Portugal, Korea, Vietnam, Singapore, Japan and the US.

I told people about him in the early 70’s. I picked up an lip of his in the bargain basementristrist bin of Sam Goody- an import Rica Japan That evening I rushed to put that on the turntable and was stunned by the overall quality of execution. There were tone colors and speed notes that were light years ahead of everyone! I told people they would either. Love him or hate him. That statement from me was born out when in 1975 , I attended the 1975.Toronto Guitar Festival where he totally rocked the classical Guitar world with his stunning performance of th Pictures of an Exhibition.I clearly remember walking around during intermission as people kept saying,”Did you see/hear that????? This slightly built Japanese musical kicked serious Guitar Butt!!,I hope that the current crop of Young kids visit the many YouTube videos of the legendary artist. Thank you Guitar Salon for your coverage of this “Monster” Guitar Hero.