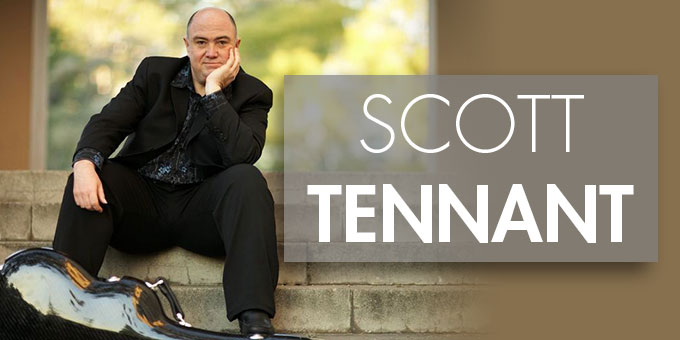 Scott Tennant, classical guitar maestro and professor at the USC Thornton School of Music, is a great friend of GSI. With popular publications like Pumping Nylon and notable contributions to Eva Beneke’s In Dulci Jubilo, not to mention his own solo and group recordings with LAGQ, Tennant continues to leave a tremendous impression in the world of classical guitar. We have had the pleasure to have him contribute live concerts and demos on many guitars that have passed through our showroom, and we’ve also had very substantial interviews with him regarding our favorite instrument. Find out more about master guitarist Scott Tennant below.

Scott Tennant is considered to be one of the world’ s premiere guitar virtuosos, and is a favorite guest artist with orchestras, on music series and major guitar festivals around the world. He is a founding member of the Grammy-winning ensemble L.A. Guitar Quartet, now in their 30th year. He has made numerous recordings as a soloist on the GHA and Delos labels, and with members of the LAGQ he has recorded for GHA, Delos, Sony Classical, Windham Hill, Deutsche Grammophon and Telarc labels. Their Telarc release “LAGQ Latin” was nominated for a Grammy, and it was their other Telarc title “LAGQ’S Guitar Heroes” which won a Grammy as the best classical crossover recording of 2005.

Mr. Tennant is well known as a teacher and author, currently with eight books to his name. His first book, Pumping Nylon, is an advanced book on classical guitar technique and is used by students and teachers alike in most of the world’s major guitar programs. It has attained a kind of “cult status”, being hailed as the only book of its kind. Tennant lives in the Los Angeles area, and is on the faculties of both the USC Thornton School of Music and the Pasadena Conservatory of Music.