A new guitar is arriving to the showroom very soon made by Valerio Licari. This particular instrument you see in the gallery below – our first guitar by him – was one of the finalists in this year’s 2019 Antonio Marin Guitar-Making Competition in Granada, of which you can see our recap here. David Collett liked it so much when he played it as part of the jury in Granada that he decided to collaborate with the Italian luthier right away in order to bring his work to Santa Monica, CA.

Although Valerio was born in Rome, Italy; he has relocated to Granada, Spain where he currently builds guitars. His instruments have been played most-notably by Andrea de Vitis and Pat Metheny, to name a couple of top guitarists.

The fine details on this guitar below borrow elements from the Fiorentina Cathedral in Florence, Italy as decorative motifs. In particular, take a look at the beautiful, golden elements that make up the rosette and saddle inlay (Valerio uses maple and rosewood to accomplish these).

The top is a German spruce with tight grain, paired with Indian rosewood back and sides, a Honduran cedar neck, ebony fingerboard with 20 frets and bone saddle and nut. Tuners are Schaller Grand Tune with anti-friction bearings and African rosewood pegs (sandblasted finish), and from base of the body to tip of the headstock, this guitar is finely French polished. Look for this listing in our New Arrivals, and in the meantime, enjoy these photos. 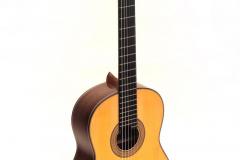 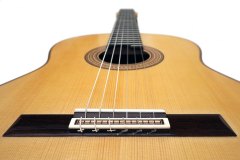 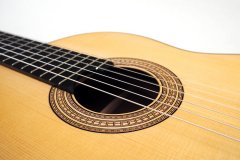 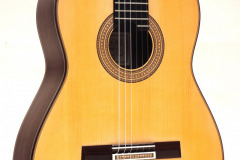 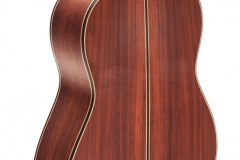 Valerio is a particularly skilled and very talented luthier, trained by Daniele Chiesa in Granada.
Good deal to buy his guitar till he is relatively unknown in USA.

Awesome! Its truly amazing piece of writing, I have goot much clear idea regarding
from this post.