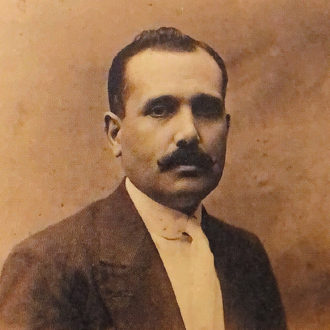 A Spanish luthier, Santos Hernández (1874-1943), together with Antonio de Torres and Hermann Hauser I, is undoubtedly one of the most important guitar luthiers in the history. His exceptional skills were recognized quite early in his career when he became known as the builder of the Manuel Ramirez guitar of 1912 that was owned and played by Andres Segovia – this very guitar currently resides in the Metropolitan Museum of Art in New York, right next to Segovia’s 1937 Hauser I. Hernández’s guitars were also played by other well-known guitarists, including Regino Sainz de la Maza (for whom Concierto de Aranjuez was written), Eduardo Abreu, and the Romero family.

When in 1921 Santos Hernández left the Manuel Ramírez workshop, he opened his own store on street “Calle de la Aduana, 27” in Madrid. This new workshop became a place for social gatherings attended by the most established classical guitarists, including Andres Segovia, Daniel Fortea and Miguel Llobet, as well as flamenco players – Ramón Montoya, Sabicas, and Luis Molina.

Players for the past 100 years have valued Santos Hernández’s guitars for their charming, introverted quality of tone and the traditional sound.

See some of Santos Hernández’s guitars