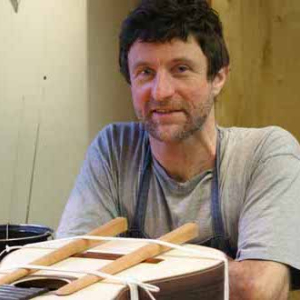 Walter Verreydt was born in Lier, Belgium in 1958. After his studies, he became a teacher in woodworking and technical drawing. His love for music was born from his family, starting with his great-grandfather, Gustave who was a violinist and music teacher, his grandfather Arthur, who played both the cello and the organ, and his great-uncle, Edward Verreydt, who was a famous pianist/organist, who was active between both world wars wars as a composer of songs, choir music and piano music. In 1985, Walter decided to combine his wood-working skills with his love of music, and made his first classical guitar. From the very beginning, he has had the good fortune to inspect and study historical guitars by such luminaries as Bouchet, Fleta, Hernandez y Aguado and others. He also befriended many of the most eminent contemporary guitar makers like José Romanillos and Daniel Friederich, from whom he learned much. In the early 1990s Walter befriended Rolf Eichinger who shared in his knowledge of the Spanish guitar making traditions and techniques during many many visits to Rolf’s workshop in Granada. Walter’s emerging personal style was first recognized in 1999, where he became 1st laureate at the “4th Mostra Concorso Internazionale di Chitarra Classica” in Baveno, Italy. In addition to building guitars, Walter has made the sharing of guitar-making knowledge an important personal mission. Since 1988, he has taught at the “Centrum voor Muziekinstrumentenbouw” in Puurs, Belgium. With his students he is an active member of the Leonardo Guitar Research (LGR) Project, which focuses on the use of sustainable non-tropical woods in guitar making. He is also one of the founders of the biennial Cordefactum festival, established in 2004, where luthiers from different countries are invited and reunited around musical instruments and their construction.

SEE SOME OF Walter Verreydt’S GUITARS