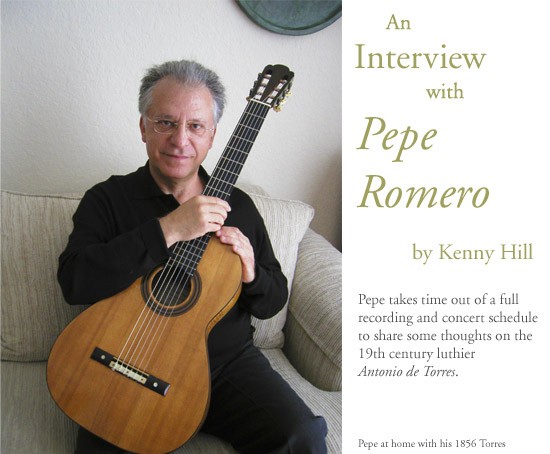 On April 10th I had an opportunity to talk with the great classical guitarist Pepe Romero about Antonio de Torres. Pepe himself owns three Torres guitars, and his brothers Celin and Angel Romero each own one. This might be the highest concentration of Torres guitars in private hands anywhere. Many thanks to Tim Miklaucic [of GSI] for arranging this interview. Following are excerpts from our conversation.

Kenny Hill: How would you describe the unique qualities of Torres’s sound?

Pepe Romero: It is the wonderful first string, clear from the lowest note to the highest, with a lyrical, singing sound, like a pure human voice. The balance between the first and second string is perfect. The third string is a dark, throaty mezzo soprano. The fourth string is like a tenor, like Pavarotti. The fifth string rings out, like deep bells, and the sixth string calls up, rising from the bottom of the earth. If I am asked to evaluate a guitar, to determine whether it is a real Torres, I won’t look at it first, but with my eyes closed will, not exactly play it, but listen to the voice.

KH: Were there others who could produce this sound?

PR: Following Torres, Manuel Ramírez in Madrid came very close, and also Santos Hernandez and Domingo Esteso. But in general the more north you look, even into France and Germany, the sense of aesthetic tends to shift toward more balance between strings, and a more unified sound. In Madrid they have a different idea about the light and the dark. In the nineteenth century the piano is in favor in most of Europe, and in the northern parts the guitar aesthetic was in the direction of the piano. But in Andalucía the guitar was in favor, for concerts and with the voice.

KH: Who else in Andalucía carried on this tradition?

PR: In Córdoba, Miguel Rodriguez, Sr. beginning in 1909, and his descendants up until the 1970s have the same way of making the instrument vibrate. The variations of design are not important. What is important is that character that allows the player to use fantasy to orchestrate chords by how he uses the fingers. A sensitive builder makes adjustments according to the materials, much the same way that I as a player will adjust to different tensions and qualities of a different instrument as I sit down to play.

KH: How does the Torres guitar relate to the more modern developments in guitar design?

PR: You are talking to a person who is completely in love with the traditional guitar. It is an instrument that can cry and can laugh and that you can tell a story with. The guitar is perfect as Torres made it. The closer you stay to it the closer you stay to perfection.

KH: When playing an instrument that is 150 years old, what part of the experience comes from the age of the guitar?

PR: It is like an old person who tells you a story. Guitars are living things, with a spirit, and are touched in their own spirit with the feelings of the people who play them. Over time their ability to feel emotions are enriched. They have more tenderness. The player is responsible for putting emotion into the guitar, and feelings provoked in the player are also provoked in the guitar.

PR: No, that is an unfortunate myth. A guitar that is well made, well played, well loved and cared for is not a disposable thing. It is important for repairmen and players to be enlightened – not to try to make them look new when they are scratched, and of course not to trash them in the first place. Sanding down the top has been the great killer, if the repairman tries to make it look new.

KH: How has José Romanillos’s work regarding Torres affected the guitar world?

PR: He has done an inestimable service in bringing the information and detail of the guitars of Torres to the public. He has influenced countless guitar makers, and most important, he has helped to light the flame of love to burn inside of you. The Torres muse lives in the heart of many makers and players.

KH: And Pepe, you too have helped to light the flame of love burning within those who love the guitar all over the world.

PR: Thank you. It is a pleasure.