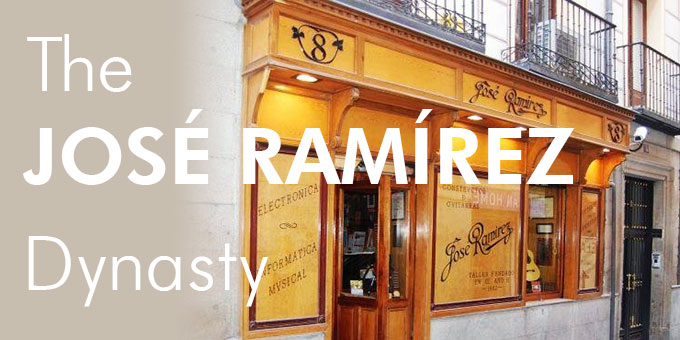 Very few names have been as influential in the development and history of the guitar as the name José Ramírez. The family tradition was born around the year 1870, when a 12 year-old boy began an apprenticeship at a local builder’s workshop. He worked to develop his skills and in 1882 he founded the José Ramírez workshop. Now in its fourth generation, with Amalia Ramírez carrying on the legacy, the Ramírez name continues to be the gold standard by which all other Spanish classical and flamenco guitars are measured.

Here, we have compiled a brief but robustly informative history of the José Ramírez dynasty, which so grandly continues to impress historians, audiences and players alike for its output of guitars that capture the Spanish tradition and soul. To go more in-depth into each generation’s special contributions to the guitar and the famous workshop, click on each individual.

José Ramírez I
Having worked with Francisco González for twelve years, José I founded his own shop. It is during this time that he finalized his “guitarra de tablao” flamenco design, which became the predominant style in its day. Created in response to the needs of flamenco players, this development was to prove a significant boost to his career. This is not to say the workshop only produced flamenco guitars: many different guitars were built, in different sizes and designed for different purposes. Several important luthiers trained under José Ramírez I, not the least his brother Manuel Ramírez, who was to become one of the most influential–and underrated–luthiers of all time. (Read his full biography).

José Ramírez II
It is ironic that the skills of a great guitar-maker and a great guitar-player are seldom one and the same. José Ramírez II was a rare exception, being not only a skilled luthier, but also an accomplished player. His skill as a guitarist led him to a tour of South America, which ended up becoming a 20-year stay, most of it spent in Argentina. It is there he met his wife-to-be, Blanca, with whom he had 2 children: José and Alfredo. Upon receiving news of his father’s death in 1923, José II returned to Spain, and in 1925 took over the family’s workshop. (Read his full biography). 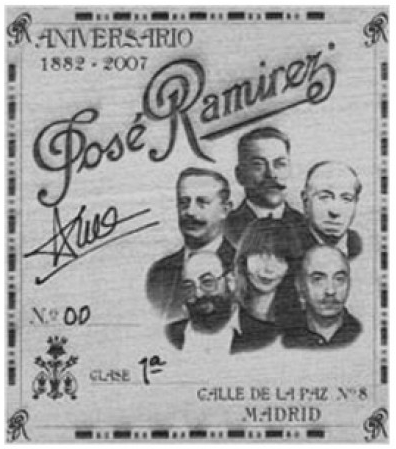 José Ramírez III
“It took me several days, following a profusion of study and calculations, to start sawing off the first board in order to achieve the greatest beauty, the best conditions for sound and resistance, and the highest degree of usability” (Things About the Guitar, José Ramírez III, Soneto Editions, pp21).

These words eloquently demonstrate the love of the craft as well as the tenacious precision that has characterized the José Ramírez workshop since its inception. With the work of José III came a turning point. In spite of the difficulties of procuring materials and woods due to the outbreak of the Spanish Civil War, José III managed to acquire enough to experiment with new designs. Although his first guitars were built in the traditional style of his father and grandfather, a few events occurred which led José III to venture in new directions. Two specific events could be considered pivotal: first, the introduction of the nylon string in the post-war years, and second, the emergence of several world-class performers who found themselves playing in larger concert halls to much bigger audiences.

To accommodate these needs, José III made several changes to the design of his guitars. He increased the size of the soundbox; he added a cypress lining to the sides of the instrument; he experimented with different types of finishes, and claimed to have developed a varnish which crystalized like shellac (French polish) but had the durability of lacquer. Perhaps most importantly, he introduced – for the first time – the use of red cedar in the construction of soundboards. (Read his full biography).

José Ramírez IV
The evolution of the Ramírez guitar continued with José IV. Even though at first he mostly built the ‘Tradicional’ model designed by his father, he also designed a new model: the ‘1A Especial’. But perhaps his most important contribution was that of designing and promoting the student models: the ‘E’ and ‘R’ series. José IV passed away in June of 2000, and Amalia Ramírez has taken over the workshop since. (Read his full biography).

Amalia Ramírez
Amalia was born in Madrid in October 1955, daughter to José Ramírez III. She joined the workshop at age 21, learning the craft alongside her brother, José Ramírez IV. After a few years of absence, she returned to help her brother run the shop. Being as creative as she is resourceful, she was at first in charge of the administration and marketing, but eventually took over the workshop itself. (Read her full biography).

Amalia’s niece Cristina and nephew José Enrique are the next generation of this dynasty of guitar makers, and have been working with Amalia since 2006. José Enrique is pursuing both an apprenticeship in guitar making in the workshop along with his studies in law school. Cristina is assisting in the shop with a variety of tasks including graphic design work, journalism and even as sound technician! She is also learning the fundamentals of guitar construction but is primarily assisting in the commercial aspect of the business.