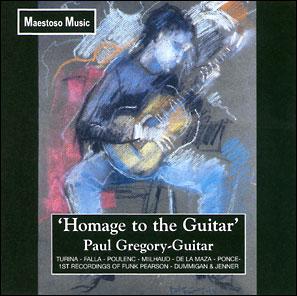 Homage to the Guitar, Paul Gregory

3. Homage to the Guitar

Paul Gregory made his London debut at Wigmore Hall in 1975. Unanimous praise from the national press secured further concerts at the South Bank and a "live" recital for the BBC direct from Broadcasting House.

Following his Park Lane Group award for twentieth century music (1976) and his first prize in the Segovia Guitar Competition in Spain (1978), Paul Gregory has enjoyed a career as concert artist touring Asia, the Americas and most of the European continent. He has given masterclasses at the Royal Academy in Dublin, the Royal Academy of Glasgow, the Boston Conservatory, the Nantes Conservatoire and at many music festivals in America and Europe.

Paul Gregory has made recordings for the Opus 1 label, Meridian and Claudio Records.

Paul Gregory has always considered chamber music playing as a pinnacle of musical expression and has performed with many other artists including The Lontano Ensemble, cellist Rohan de Sarem, harpsichordist Sharon Gould, the Cummings String Trio and the American soprano Camille Zamora. Alongside violist Peter Sulski, he is a member of a collective of chamber musicians known as "In Company". 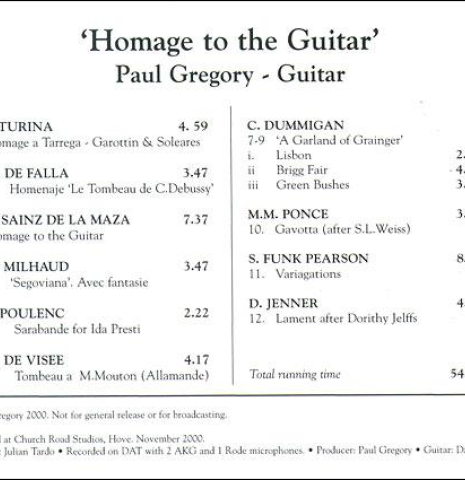 Homage to the Guitar, Paul Gregory