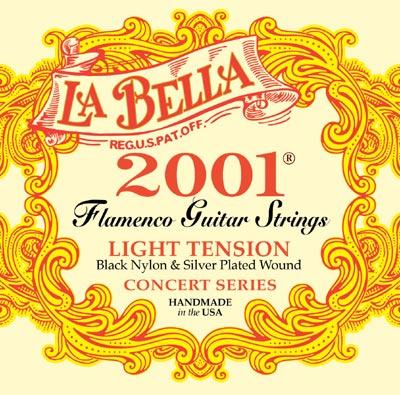 LaBella has a long history of string making, and the owners, the Mari family, are descendants of some of the very first string producers in Europe many centuries ago. They now carry on their excellent tradition in the U.S. making a wide range of strings for both classical and electric guitar, the bowed string instruments, and many other plucked string instruments such as banjos and mandolins. Their 2001 line of classical guitar strings are top notch. The different tensions that we carry have similar color characteristics. The Extra Hard strings can be played the loudest, the Medium strings are a bit sweeter. The Medium Hard is a bit easier on the left hand than the Extra Hard. The Flamenco Mediums and Lights are quite similar to the Mediums with perhaps more percussiveness and less sustain.

Basses: These are solid, warm strings but with plenty of bite, particularly when new. The stay in tune quickly and project quite well. Their intonation is very consistent and they have good sustain. They are somewhat biting and brighter than some of their counterparts.

Trebles: These are excellent, straightforward trebles with good sustain and good consistency of intonation. They exhibit typical variation among the three strings and tend to be fairly bright, but not overly so. They are workhorse strings that complement many guitars very well.