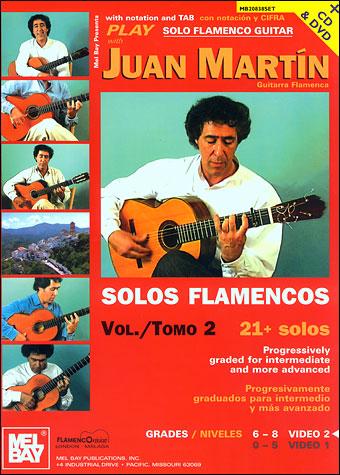 This book, CD, and DVD by flamenco guitarist Juan Martin is the second volume of a 2-part series. It provides 21 solos, progressively graded in the three higher grades, 6 to 8, to suit players at intermediate and more advanced stages, who already have some experience of the instrument and the techniques of flamenco. In addition it contains 4 extra recorded tracks and 2 more complete concert solos presented only in notation and tablature. Besides further examples of 9 of the 18 palos (rhythmic forms) played in Volume 1, it contains examples of 7 further palos, to make a total of 25 for the series. The music for all these is accurately written in notation and flamenco tab (cifra) in this book, and (except for the two final solos) is also recorded on the accompanying CD. The DVD contains over 60 minutes of music, and also includes introductions by Juan Martin and brief scenes of Andalucia today. Juan Martin superbly demonstrates how the art of flamenco soloing develops from simple beginnings to the level of concert solos which draw on classic falsetas and his own original compositions from his albums.

Juan Martin is an outstanding player and originator. He is among the very small number of flamenco guitarists to achieve international recognition as a solo concert and recording artist. From his origins in Malaga in Andalucia, his art has evolved in the purest Spanish traditions of flamenco. He is also passionately committed to communicating the mysteries of this great tradition to others, as shown by his essential method "El Arte Flamenco de la Guitarra", books of transcriptions of solos from his many albums and now two video series.