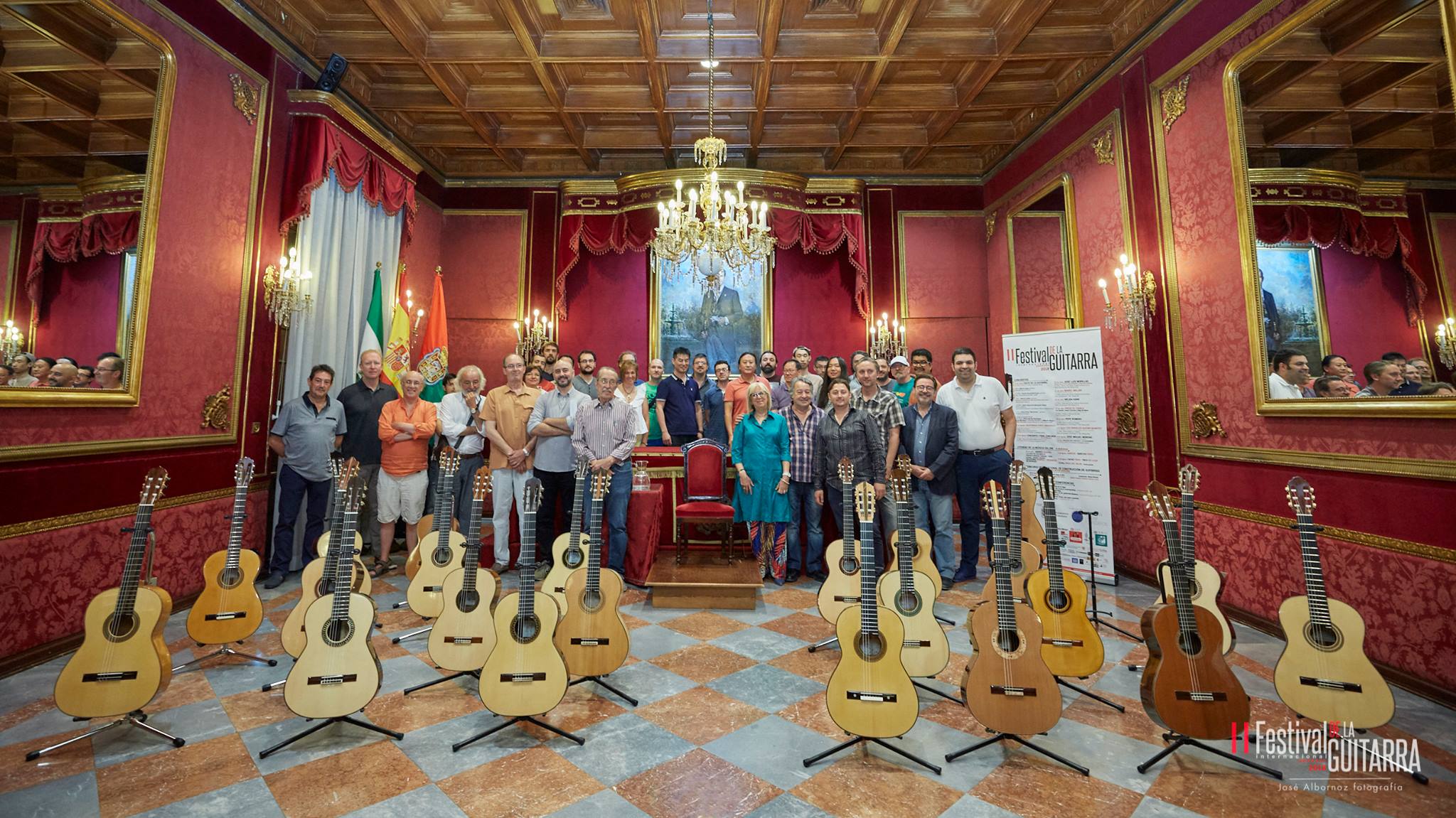 As can be seen in the pictures below, the preliminary round for this event was held in the stunning office of the Mayor of Granada, the absolute perfect setting for close examination of each luthier’s detailed craftsmanship. Here, the jury meticulously listened and inspected all 23 submitted guitars, rating each on their construction as well as their auditory and playing qualities. At the end of the first day, 13 guitars were selected for the semi-final round which took place the next day in the same venue.

After two days of judging, 6 guitars were left for the final round which was held on day three at a new venue – the stage of the Teatro del Centro Cultural Federico Garcia Lorca. In this large concert setting, the projection and clarity of the guitars were tested in an effort to see how they would hold up in a professional performance and a packed house as the public was invited to attend. The performances on each guitar were given by Russian concert artist Alexei Khorev, who currently resides in France.

Once everything was said and done, the jury awarded three prizes: first to Granada luthier Francisco Munoz Alba, second to Chinese luthier Yulong Guo, and third to Dutch luthier Hans van Velzen. Legendary Spanish builder and the competition’s namesake Antonio Marin Montero was there to personally award the first prize to Francisco Alba.

As an official partner of the competition, GSI will be receiving guitars built specially for us from all three luthier. We have already been enjoying an instrument built by first prize winner Francisco Alba – a 2008 blanca previously owned by Grisha Goryachev – and are looking forward to getting our hands on the other winning luthier’s instruments!

All photos courtesy of Jose Albornoz. 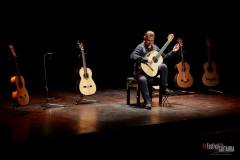 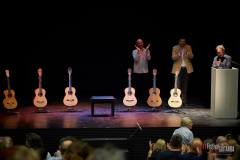 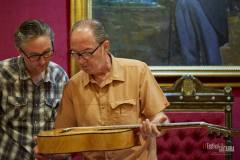 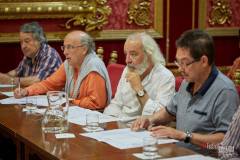 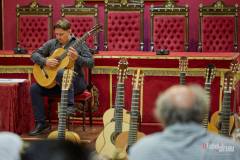 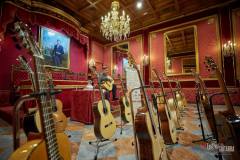 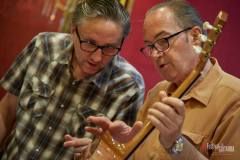 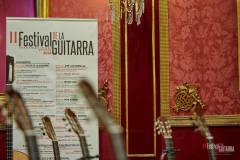 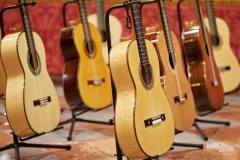 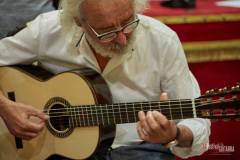 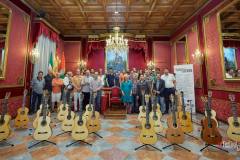 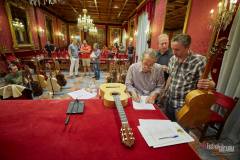 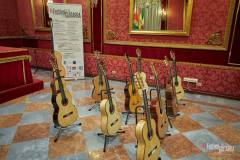 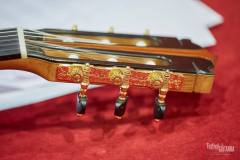 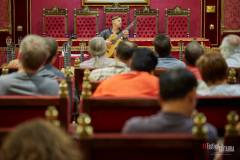 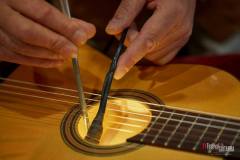 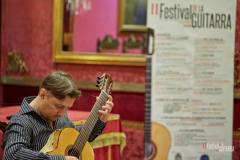 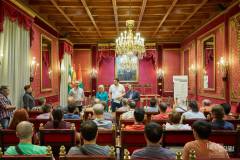 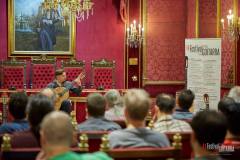 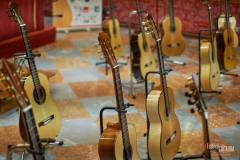 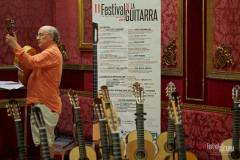 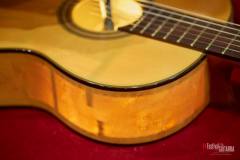 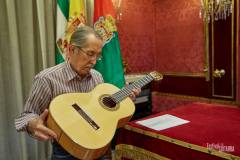 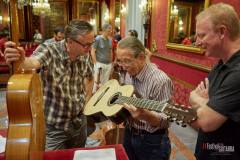 Wow! How exciting this event must have been. Crème de la crème.

Thank you for covering and participating in this event. Having learned guitar making in Granada from Juan Román Padilla in the mid 1970s I am so happy others are discovering this paradise of guitar making. I was also touched to see one of Juan’s guitars used on the poster — perhaps a quiet tribute from Antonio Marin Montero to a slightly older guitar maker who helped him survive during those challenging early years. And they were challenging years for guitar makers to survive anywhere in the world. It is hard to communicate the spirit of Granada in those days. You could stroll up the Cuesta de Gomérez and in one afternoon be given a lesson in french polishing, watch another maker using hot hide glue to install rosettes from veneer strips and tiles — I watched four done in one hour– something I wish modern makers could watch. No power tools, just a circle cutter made by a local machinist — and get a lesson on how the rosette prevents cracks from traveling from the sound hole into the guitar by cutting all the way through the soundboard and replacing it with a dense matrix of glue and intersecting veneer sandwiches. Also explained: why the backing plate must have grain perpendicular to the soundboard. Obviously, the secret to the ease if construction is hot glue– as it begins to set up you can immediately loosen it up with fresh hot glue. It also allows the tiles to ‘melt’ together. The next day they all get planed and scraped down to the spruce top, and finally the last step is to remove the circle from the center. I don’t know if it is that way today, but from what I read there is still an incredible cooperation between some builders. There were some ‘issues’ in those days as well, and I later learned that Juan also had a hard time getting started, but he reversed his own experience by welcoming other makers and helping set them on their way. I wasn’t in his shop but an hour before he asked me if I wanted to hang out for the rest of the year and learn the whole process from start to finish. That was not a hard question to answer! All hand tools, no routers, thickness sanders, or other distractions from simple and efficient solutions. Having a mentor to introduce you to toolmakers and other makers is truly a lifechanging experience. Juan knew I really wanted to make guitars with very light construction, so he set up a visit to Antonio Marín Montero and Manuel Bellido, whose workshop was far off the beaten path. There I learned how to build a very precise table saw from wood and an electric motor. That may have been one of the first power tools in town, the poor nan’s Inca. Another day we visited a guy just around the corner who was making beautiful museum quality replicas of baroque frames with astonishing artistry and efficiency. It was also in Juan’s shop that I first heard the beauty of Atahualpa Yupanqui.

I’ve never met a kinder, more generous, or gentler man — and a wonderful teacher who was a link to the previous century and its techniques. If one looks at a guitar by Antonio Torres one should keep in mind that it is all possible without any electricity, and the techniques are astonishingly efficient and clever. Recently I found all my notes from those years and am wondering about places where copies could be made available to guitar makers and historians. Suggestion welcome both in the US and in Spain.

You guys gotta start a magazine, I mean these smal write ups are great but such a tease! Thank you!

Does anyone know who the maker is of the guitar shown with the ‘arches’ rosette, similar
to Romanillos? Lovely guitar.