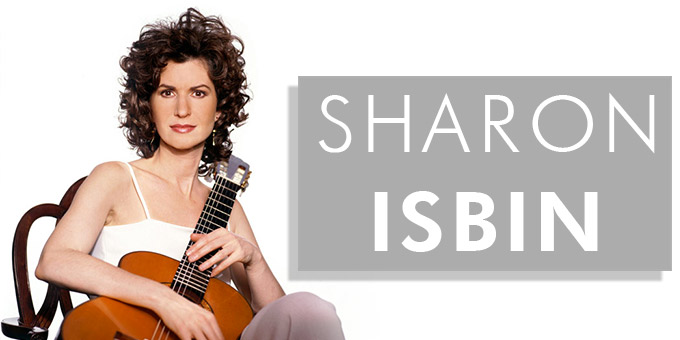 Acclaimed for her extraordinary lyricism, technique and versatility, multiple GRAMMY Award winner Sharon Isbin has been hailed as “the pre-eminent guitarist of our time”. She is the winner of Guitar Player magazine’s “Best Classical Guitarist” award, and the Toronto and Madrid Queen Sofia competitions, and was the first guitarist ever to win the Munich Competition. She has appeared as soloist with over 170 orchestras and has given sold-out performances in the world’s finest halls, including New York’s Carnegie and Avery Fisher Halls, Boston’s Symphony Hall, Washington D.C.’s Kennedy Center, London’s Barbican and Wigmore Halls, Amsterdam’s Concertgebouw, Paris’ Châtelet, Vienna’s Musikverein, Munich’s Herkulessaal, Madrid’s Teatro Real and many others. She has served as Artistic Director/Soloist of festivals she created for Carnegie Hall, the Ordway Music Theatre (St. Paul), New York’s 92nd Street Y, and the acclaimed national radio series Guitarjam. A frequent guest on NPR’s All Things Considered and Garrison Keillor’s A Prairie Home Companion, she has been profiled on television throughout the world, including CBS Sunday Morning and A&E. She was a featured guest on Showtime Television’s hit series The L Word, and a soloist on the GRAMMY nominated soundtrack of Martin Scorsese’s Academy Award-winning The Departed. 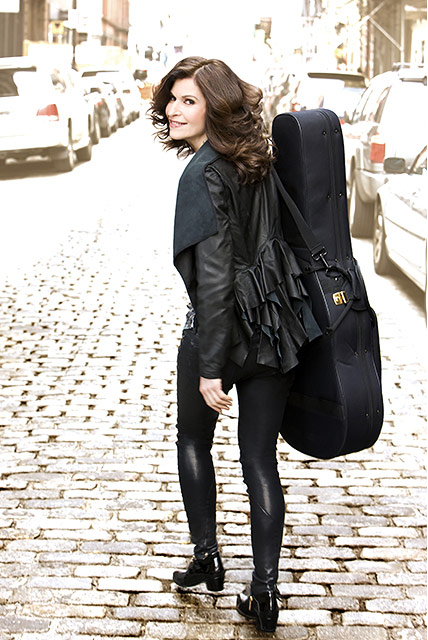 On September 11, 2002, Ms. Isbin performed at Ground Zero for the internationally televised memorial. Among other career highlights, she performed in concert at the White House for President and Mrs. Obama in November 2009, and was the only classical artist to perform in the 2010 GRAMMY Awards. She has been profiled in periodicals from People to Elle, The Wall Street Journal and The New York Times, as well as appearing on the covers of over 45 magazines. Her 2015 national television performances on PBS include the Billy Joel Gershwin Prize, Tavis Smiley, and American Public Television’s presentation of the acclaimed one-hour documentary on her life and work produced by Susan Dangel titled Sharon Isbin: Troubadour, seen by millions on nearly 200 PBS stations across the US and released with bonus performances on DVD/Blu-ray by Video Artists International.

Ms. Isbin’s catalogue of over 25 recordings—from Baroque, Spanish/Latin and 20th Century to crossover and jazz-fusion—reflects remarkable versatility. Her latest releases, Sharon Isbin: 5 Classic Albums (Warner) and Sharon Isbin & Friends: Guitar Passions (Sony) with rock/jazz guests Steve Vai, Steve Morse, Heart’s Nancy Wilson, Stanley Jordan and Romero Lubambo, have been #1 bestsellers on Amazon. Her 2010 GRAMMY Award-winning CD Journey to the New World with guests Joan Baez and Mark O’Connor, was a #1 bestselling classical CD on Amazon and iTunes, and spent 63 consecutive weeks on the top Billboard charts. Her Dreams of a World soared onto top classical Billboard charts, edging out The 3 Tenors, and earned her a GRAMMY for “Best Instrumental Soloist Performance”, making her the first classical guitarist to receive a GRAMMY in 28 years. Her world premiere recording of concerti written for her by Christopher Rouse and Tan Dun received a GRAMMY, as well as Germany’s prestigious Echo Klassik Award. She received a Latin GRAMMY nomination for “Best Classical Album” and a GLAAD Media Award nomination for “Outstanding Music Artist” (alongside Melissa Etheridge) for her Billboard Top 10 Classical disc with the New York Philharmonic of Rodrigo’s Concierto de Aranjuez and concerti by Ponce and Villa-Lobos. This marked the Philharmonic’s first and only recording with a guitar soloist, and followed their Avery Fisher Hall performances with Ms. Isbin as their first guitar soloist in 26 years. Baroque Favorites for Guitar with the Zurich Chamber Orchestra remained on the Billboard Top 10 for 16 weeks, and her Journey to the Amazon with Brazilian percussionist Thiago de Mello and saxophonist Paul Winter, a bestseller in the U.S. and the U.K., received a GRAMMY nomination. She is also featured on Howard Shore’s GRAMMY nominated soundtrack for The Departed.

Other CDs include Artist Profile, Wayfaring Stranger with mezzo-soprano Susanne Mentzer, Greatest Hits (EMI), and Aaron Jay Kernis’ Double Concerto with violinist Cho-Liang Lin and the Saint Paul Chamber Orchestra which received a 2000 GRAMMY nomination. Her eight best-selling titles for EMI include J.S. Bach Complete Lute Suites and concerti by Joaquín Rodrigo, which the composer praised as “magnificent”. She is also featured on the GRAMMY Foundation’s Smart Symphonies™ CD distributed to over five million families. Her recordings have received many other awards, including “Critic’s Choice Recording of the Year” in Gramophone and CD Review, “Recording of the Month” in Stereo Review, and “Album of the Year” in Guitar Player. 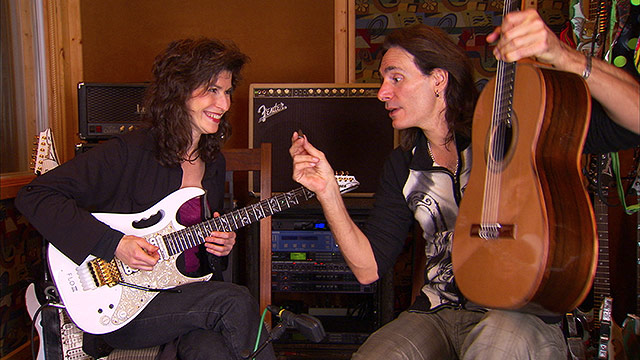 Sharon Isbin has been acclaimed for expanding the guitar repertoire with some of the finest new works of the century. She has commissioned and premiered more concerti than any other guitarist, as well as numerous solo and chamber works. Her American Landscapes is the first-ever recording of American guitar concerti and features works written for her by John Corigliano, Joseph Schwantner and Lukas Foss. In November 1995, it was launched in the space shuttle Atlantis and presented to Russian cosmonauts during a rendezvous with Mir. In January 2000, she premiered the ninth concerto written for her: Concert de Gaudí by Christopher Rouse with Christoph Eschenbach and the NDR Symphony, followed by the US premiere with the Dallas Symphony. Other composers who have written for her include Joan Tower, David Diamond, Aaron Jay Kernis, Leo Brouwer, Howard Shore, Steve Vai, Ned Rorem and Ami Maayani. In 2003 she premiered John Duarte’s Joan Baez Suite, and in 2005 she premiered a duo by rock guitarist Steve Vai in their joint concert in Paris’ Théâtre du Châtelet. Her world premieres in 2015 include Affinity: Concerto for Guitar & Orchestra composed for her by Chris Brubeck, and a song cycle by Richard Danielpour commissioned for her and mezzo-soprano Isabel Leonard by Carnegie Hall for their 125th anniversary and by Chicago’s Harris Theater.

Other recent highlights include tours with the Zurich Chamber Orchestra, Austria’s Tonkünstler Orchestra and Belgium’s Philharmonique de Liege, recitals and concerti in Carnegie Hall and Washington D.C.’s Kennedy Center, a week of performances at the Théâtre du Châtelet in Paris, Filarmonica Toscanini in Milan, MIDEM Classical Awards in Cannes, a 20-city Guitar Passions tour with Stanley Jordan and Romero Lubambo in 2014, and a performance in Carnegie Hall with Sting, Katy Perry, and Jerry Seinfeld on November 4, 2015 to benefit the David Lynch Foundation. 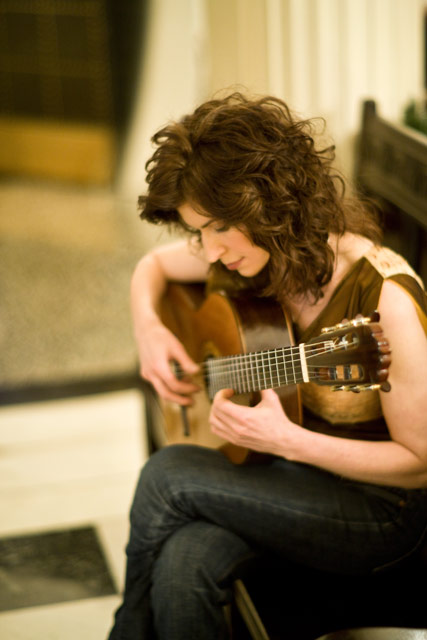 As a chamber musician, Ms. Isbin has performed with the Emerson String Quartet, the Chamber Music Society of Lincoln Center, a “Guitar Summit” tour with jazz greats Herb Ellis, Stanley Jordan and Michael Hedges, trio recordings with Larry Coryell and Laurindo Almeida, and duo recordings with Carlos Barbosa-Lima. She collaborated with Antonio Carlos Jobim, and has shared the stage with luminaries from Sting to Aretha Franklin.

Born in Minneapolis, Sharon Isbin began her guitar studies at age nine in Italy, and later studied with Andrés Segovia and Oscar Ghiglia. A former student of Rosalyn Tureck, Ms. Isbin collaborated with the noted keyboardist in publishing and recording landmark first performance editions of the Bach lute suites for guitar (Warner Classics/G. Schirmer). She received a B.A. cum laude from Yale University and a Master of Music from the Yale School of Music. She is the author of the Classical Guitar Answer Book, and is Director of guitar departments at the Aspen Music Festival, and The Juilliard School, which she created in l989 becoming the first and only guitar instructor in the institution’s 100-year history.

In her spare time, Ms. Isbin enjoys trekking in the jungles of Latin America, cross-country skiing, snorkeling and mountain hiking.