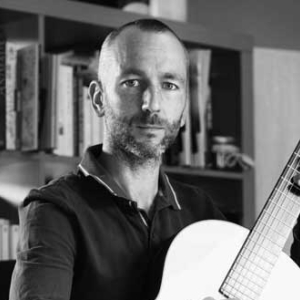 I like to think that nature is far from having delivered all its secrets...

French luthier, Bastien Burlot, has built guitars for famous guitarists such as Roland Dyens and Thomas Viloteau. However, with his most recent “Alkemia models”, Bastien is exploring a completely new guitar-making path that combines traditional lutherie with spirituality and symbolism. His guitars and rosettes are inspired by the great cathedrals of France such as La Cathédrale d’Amiens, Chartres, Strasbourg and Paris.

Bastien started his music education as a guitarist at a very young age when his dream was to become a concert player. He followed a traditional course of study that led him to enroll at the Conservatory of Lille in Northern France. Then Bastien joined Roland Dyens’ guitar class at the prestigious Paris Conservatoire after having passed a very difficult entrance exam. When he studied at the conservatory, he realized that he didn’t feel comfortable performing on the stage all the time due to the stress connected with performance anxiety. Around that time he met a luthier who offered him an internship in a workshop where he decided to build his own guitar, even though at first his goal certainly wasn’t to become a luthier! Bastien continued his studies at the conservatory and at the same time he spent one day a week building his first guitar which he completed after 4 months. When he finished this first instrument, he liked the construction process so much that he decided to make another guitar, but this time, entirely by himself. So, Bastien built his second guitar that turned out not to be successful at all! Of course Bastien wanted to make a better one… and progress again, which led him to build his fourth guitar, then fifth, and so on…
At the end of Bastien’s studies at the Conservatoire de Paris, he became a guitar teacher and taught for 7 years. During this period he continued to build guitars at home in his free time. In 2009, After 7 years of teaching the guitar and having made around 30 instruments,  Bastien realized that his work started to bear fruits. This was also the moment when he changed his career path and became a full-time luthier.

At the beginning of Bastien’s career in lutherie, he worked a lot on a modern approach to guitar-making and was known for his guitars with a sound-hole on the side. Bastien did a lot of acoustic research that led to the creation of his model “Maestro hf” which he had been building continuously for 8 years. Recently, Bastien has started to learn more about various things outside of the world of lutherie. He became fascinated with symbolism and spirituality outside of a religious or mystical framework. Bastien’s research on symbols led him to discover a sacred geometry of French cathedrals without even knowing that it would be implemented in his guitars one day.

Bastien decided to design a new instrument, his “Maestro hf” model was very up-to-date, but there was something incredibly attractive to him about these beautiful cathedrals. He began to study the “masters from the past” of guitar-making, Torres, Hauser, etc. and tried to understand their state of mind, their way of working and their innovations. Bastien wanted to make guitars that would combine his need for implementing innovations and his research on the symbolism and sacred geometry of cathedrals. This is how he started making “Alkemia” models. All the “Alkemia” guitars that are dedicated to a particular cathedral have the same label. The design is unique for all models, however the variations of the design are more aesthetic. Bastien describes his rosettes as “the doors to spirituality”. Many of them show strong references to cathedrals, for example stained-glass patterns.

Since Bastien has also studied guitar for many years, he knows exactly what instrument would be best for him. He makes all guitars as if they were intended to be his personal instruments. Bastien focuses on making sure that his instruments meet the highest standards in terms of ergonomics, playability and comfort.

In terms of the desired sound, Bastien always wants his guitars to have a traditional sound, rather than trying to imitate other instruments. It’s very important for him, because many modern guitars have a powerful, yet synthetic sound. His desired tone needs to be balanced in power, projection and equal among all registers.

SEE SOME OF Bastien Burlot’S GUITARS