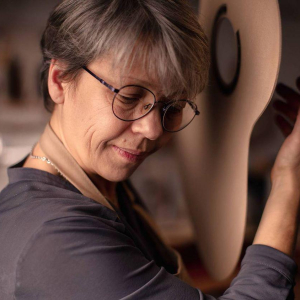 My work is founded in the centuries-old tradition of European lutherie and I am aware of the meaning of preserving this heritage, this common cultural frame.

Angela Waltner was born in Oberstaufen in southern Germany in 1970. She is one of the most academically-credentialed luthiers we've met. In the years 1992 to 1995, she studied at the Luthier School in Mittenwald. Then she worked for two years in instrument restoration, specializing in the 19th-century French guitars. Angela also holds a degree in musical instrument making from the Westsächsische Hochschule Zwickau, University of Applied Sciences, in Markneukirchen, and a Master Craftsman diploma from the Chemnitz Chamber of Trade. She was the recipient of the Artisan sponsorship award at the Berlin Chamber of Trade, and a Research assistantship at the Institute for Musical Instrument Making (IfM) in Zwota.

Angela's academic background, scientific understanding, and analysis have a great influence on her building style. She has a thirst for pushing the boundaries through constant experimentation which resulted in the development of three distinct guitar models with their own set of structural and aesthetic specifications.

Angela has also created the "FABS" system ("Free Adjustable Bridge System") which she applies to her guitars. The FABS system uses a saddle broken into 3 pieces which can be easily manipulated (even with the strings at tension) to give each string its own independent length for perfect tuning.