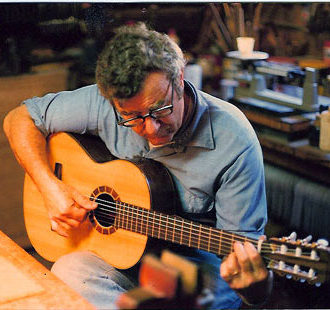 I'll never forget the first time I saw one of my guitars played on a concert, it was a moving experience... Like seeing one of your children becoming successful.

John Gilbert (1922-2013) is remembered as having been one of the more successful and popular of the “innovative” makers of the past 40 years. His instruments were played by an entire generation of guitarists that included the likes of David Russell, Raphaella Smits, David Tanenbaum, Marc Teicholz, David Leisner, Fred Hand and many others. Gilbert’s approach to guitar making was largely influenced by his engineering background (he had been a machinist for Hewlett-Packard) which not only meant that his craftsmanship was extremely precise, but that he also had innovative ideas with respect to sound production – he had a special system taking into account the dimensions, weight and stiffness of materials, that was very controlled and exacting. His most famous innovation was the use of a “pin bridge” – instead of a traditional bone saddle at the bridge where all 6 strings share part of its space, Gilbert had a system of 6 metal pins that supported the strings individually, maximizing the transmission of each note independently of the others for increased separation and independence between voices and notes. Adjusting the action of each string individually is also an advantage for many players looking for customized setup of their instrument.

See some of JOHN GILBERT’s guitars