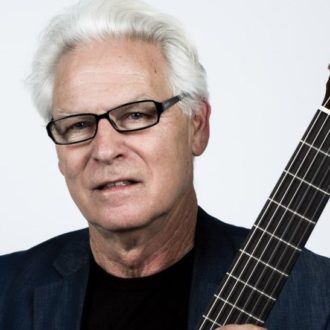 Some contemporary guitarists have different needs than their predecessors, that demands on modern classical guitarists call for different qualities in their instruments

GSI: What inspired the master series?
KH: During my first period of guitar making in the 1970’s, in the arrogance of youth, I thought I could reinvent the instrument out of my own creativity, without much historic perspective. I dropped out of guitar making during the 80’s (still playing though) but when I returned to guitar making in 1990 I was more humbled by the realities of life and work, and I knew I needed a more grounded apprenticeship, to get in touch with the basics. Also in the 90’s I started a workshop to produce a line of guitars, and it made good marketing sense to develop a variety of instruments based on known historical figures. It made publicity easier, because the differences in style between the Masters were already familiar to the guitar public. So I started researching iconic instruments one by one, and learning what I could by replicating them as well as possible.

GSI: What did you learn from making these guitars, and what, if anything, surprised you?
KH: I learned that there are many ways to make a good guitar, some of them seemingly contradictory. I also learned that the defining differences were often found in subtle minutiae of design and process, details not readily apparent. When developing a new model it would take much more than just copying the obvious things, like shape or bracing, but small things could make a big difference in arriving at a true family resemblance to the originals. It would often take many, many instruments to get close to the essence of a particular model of replica. I would copy details, even things that didn’t make sense to me. I tried to do the work conscientiously, but edit myself and my own agenda from the process. 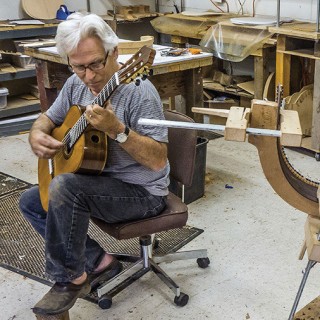 GSI: Was there a moment when you were working on these when you thought ‘aha – now I know what I want to make next’?
KH: In developing the various models for public release I would look for contrast, iconic instruments that were very different, such as Hauser as compared with Fleta, Torres as compared with Miguel Rodriguez. Also I was influenced by instruments that I lived with, like the 1856 Torres that I got from Fred Walecki . That guitar affected me so emotionally that I just had to build it as a tribute to the greatness and profound influence of Torres. Sometimes someone would ask me to do something and I’d think, “Sure, why not?” There are many guitars that I have wanted to try to replicate and learn from, like Daniel Friedrich or Bouchet, but I just didn’t find the time. Now, I don’t know….

GSI: Were there particular details from other makers that inspired the Signature model, or was it more like you just felt ready to do your own thing?
KH: Yes, I felt ready to do my own thing. I had always made instruments of my own designs on the side, and that was progressing in parallel. It was around 2000 when I started working with double tops that I felt I was finding a unique voice. I had seen a few double tops by makers like Damman and Wagner, and it was Fritz Mueller that really convinced me to try it. When I finally made a double top, I got a sound that was different than any of those makers, and different from what I was getting with the Master Series. I kept working on it (and I still am) and realized that I was making something unique and rewarding, and that other players were responding to it as happily as I was. Now the Signature Model is defined by the double top, the elevated fingerboard, sound ports, laminated sides, and the cosmetic touches that would be part of my “branding”, but it is also still evolving. I’ve been working with a more-or-less traditional fan bracing system and also an all-wood lattice bracing system, both offering their own strengths and possibilities. I also have used a two-way truss rod for a long time, which helps to get the left hand string action perfect, giving the guitar maximum playability. In developing the Signature Model I have definitely lifted elements from every one of the old masters I have worked with, as well as adding my own spin. I was also influenced personally by Robert Ruck and by Tom Humphrey. There is probably no element in my Signature guitar that wasn’t derived or influenced by someone else, but they are reconstituted in a way guided by my own sensibilities and sound imagination. Every element is filtered by my own needs and pleasures as a player. Every one of the masters we revere now was an iconoclast in his own time. Each of the great historical guitar makers that we emulate was in fact making his own break with tradition. I appreciate the accomplishments and sounds of the historical master guitars, and I think the Master Series is a valuable product line to make available to the guitar world. But at this point I am more interested in making my own personal contributions to the development of the guitar, rather than being just a good copyist. I believe that some contemporary guitarists have different needs than their predecessors, that the demands on modern classical guitarists call for different qualities in their instruments. This is a fact of life. The competitive environment of guitar careers, and the incredible level of technical ability that this generation of guitarists is exhibiting is calling for new capacities in the instruments they play, and this influences the entire community of guitarists, both professional and aficionado.

GSI: What’s with the Standup? That’s, like, totally not conventional. What gives?
KH: I’ve never been bound by convention, except when it suited me. I did the Stand Up Model for myself, and some others have embraced it for their own purposes. Two reasons; one is that sitting and playing the guitar in the traditional classical pose for 35 years was having consequences on my lower back, and standing up with a strap relieved that completely and immediately. The other reason struck me when I was doing a few gigs opening for the amazing fingerstyle steel string player John Danley, I could see his stage presentation and he was having so much more fun standing up in front of the audience, and being able to really put out. I saw that there was a greater potential for relating with the audience, more openness and direct contact, less introverted. It’s more vulnerable in a way, but as a musician vulnerability is not necessarily a bad thing. The Stand Up is simply a normal Signature guitar that has a tapered body, and strap buttons. The side on the “upper” bass side of the body is narrower, making the guitar vertically tapered, allowing the guitar to lie back against the player, making it more stable with a strap. This enables me to play any repertoire comfortably while standing, with only a minimum of adjusting technique. I use the strap when I’m sitting too. It’s also more comfortable sitting in a “normal” classical posture, because the ergonomics of the tapered guitar body brings the right arm back a bit, allowing the shoulder to relax and the right hand more freedom. Standing up is great when playing with other instruments too. My friend Almer Immovic plays in a fantastic duo with his wife, flautist Jessica Pierce, and playing eye to eye gives them a whole different kind of musical partnership on stage, no longer soloist and accompaniment. It’s much more dynamic. To the general public standing up and playing looks perfectly normal, steel string and electric players do it all the time. It’s just devout classical guitar audiences that need a little shaking up.

GSI: You produce more instruments than other classical guitar makers, at least American builders. What is your shop like?
KH: I have gone in a somewhat different direction than other American builders, most of whom work alone, and produce a limited number of guitars. I have been fortunate to employ some fine assistants, some who have been with me for many years. This has been a tremendous advantage in that, by using many hands and eyes and skills, we can cover a lot more territory in a shorter amount of time. It’s a lot of work to develop these ideas, and it couldn’t have been done without the people I have worked with. I spearhead the ideas, and eventually am able to pass the daily work on to my team. I am very proud of them, I learn a lot from them, and we are able to provide a level of quantity, quality, consistency and price that I couldn’t even think of by working just on my own. My production staff has varied from 2 to 5 people, fine and dedicated guitar makers. I myself continue to build around 10 to 20 guitars personally in a year, and I develop new ideas and designs, as well as making special instruments and supporting production as I am needed. 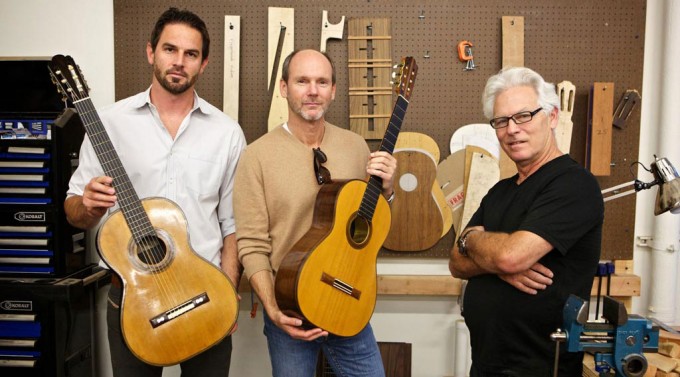 GSI: What’s next?
KH: Hmmm. I’m just finishing up the development of the Performance Series, which is a basic classic guitar, but with a hot-rod soundboard – double top with lattice bracing and sound ports. I’ve been working on it for close to two years. It is a somewhat more affordable model than the Signature, that still delivers a very high performance concert guitar sound and dynamic capacity. It is a very competitive instrument. The SIgnature guitar is always open to new development if I think I can improve it in some way. Already I am very happy with the results, but contentment is often short lived, and there always seems to be something cool right around the corner. I continue to make the Master Series, but more on a special order basis. I do hope to continue to provide them to GSI, especially because they are in the position of often handling the kinds of original master guitars that these were based on. They have been quite supportive and enthusiastic about these guitars and the need for them over the years. I’m also very pleased to note that GSI is handling my Signature and Performance model guitars as well, because I believe these instruments are valuable assets to guitar players and buyers of all kinds. It’s a challenge and a thrill to manage the art, the craft and the business of guitar making. It’s like music – the more you do the more there is left to do. Keeping all of these skills alive and growing is a challenge, but one that presents so many opportunities. It’s a privilege to be immersed in something so far reaching and inexhaustible as the guitar, it’s instruments and it’s music.

See some of KENNY HILL’s guitars