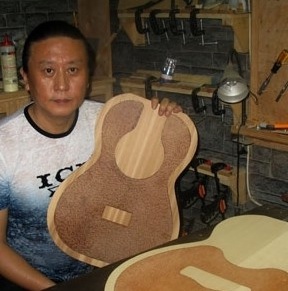 Yulong Guo has been building guitars since 1983 and has gained a solid reputation in recent years for his high-quality student-level double top guitars, as well as a concert double-top model based on the soundboard designs of Antonius Mueller. However at the 2018 MusikMesse in Frankfurt, Germany, he was able to evaluate an authentic Antonio de Torres guitar, which had a profound effect on him. He set his mind to designing and building a top-quality traditional concert model, and prepared this new model for the 2nd International “Antonio Marin Montero” Guitar Building Competition in Granada, Spain. The guitar was a hit – a major success and it landed him a 2nd prize. GSI is pleased to be his exclusive dealer in the US for the traditionally built model.

See some of YULONG GUO’s guitars